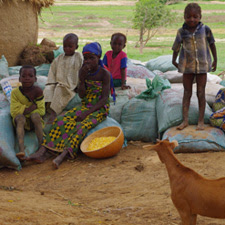 Children in Zamfara sit atop bags of lead-contaminated soil, which were removed from their village during cleanup.
In early 2010, ducks began to disappear in northern Nigeria. People would later report that they noticed there were fewer ducks in the area, but no one thought it was important at the time.
However, a few months later in May 2010, public health officials learned that hundreds of children had become sick in northern Nigeria. Reports stated that the children suffered from vomiting, abdominal pain, headaches, and seizures. After becoming ill, many of these children had died. The cause was unknown, and such a large number of childhood deaths and illnesses concerned public health officials.
A team was sent to one of the villages to find out the cause of the children's deaths. Team members came from the CDC-Nigeria office in Abuja, the Nigerian Federal Ministry of Health, the Nigerian Field Epidemiology and Laboratory Training Program, the World Health Organization, and Medecins Sans Frontieres (Doctors Without Borders). Dr. Lora Davis, a CDC Animal-Human Interface Officer in Nigeria, was one member of the team.

The Situation in Zamfara

The team traveled to Zamfara State in northern Nigeria and began the investigation to identify the cause of the outbreak in two villages. In each village, residents reported that one-fourth of all the children in their communities had died in the past year. The team found unsafe levels of lead inside most of the homes, and water from the community wells also had high levels of lead. Children in both villages had dangerous levels of lead in their blood.
Changes in animals can provide an early warning of the presence of disease or a dangerous change in the environment. As the extent of the lead poisoning became clear, Dr. Davis wondered if there had been any warning signs of lead contamination in the animal populations. She asked the villagers if any animals in the area had died, and they mentioned the disappearing ducks from earlier in the year but said that they did not think it was important. The death of these animals was a missed clue that could have alerted authorities of the crisis earlier. These ducks were sentinels (warning signs) of an environmental hazard.
Lead is a naturally occurring heavy metal, but it was unusual to find such high levels of lead in these communities. Zamfara State is an agricultural region, and traditionally most villagers relied on farming to earn a living. However, the team learned that the area was also rich in many minerals, including gold. In recent years, the price of gold had risen and many villagers had started mining gold to earn more money.
The team observed the communities and saw many unsafe practices that would expose adults, children, and animals to harmful levels of lead. Since most villagers did not wear personal protective equipment while working with the gold ore, they would return home from the mines with lead dust on their clothing. The team also saw that many villagers would bring rocks inside their homes to extract the gold. These rocks contained lead, and when the gold was extracted, the lead dust would be released and spread throughout the house. Children often helped to grind the gold ore exposing them to high levels of lead dust.
Investigations of other villages in Zamfara State revealed that the lead poisoning was widespread. Thousands of children had dangerous levels of lead in their blood, and hundreds of children and animals had died throughout the region. It was the largest known outbreak of lead poisoning in history.

The Dangers of Lead

People can be exposed to lead in many ways. When lead dust is in the air, children and adults can breathe in lead particles. They can also be exposed by drinking water or eating food contaminated with lead. Children can be exposed to lead from paint, leaded gasoline, and batteries. Before this outbreak, there were no reports of children being exposed to lead dust from gold mining.
Exposure to lead is very dangerous, especially for children. Lead can damage many body systems, including the brain, kidneys, bones, and the nervous system. Children exposed to lead have developmental problems such as lower IQ scores and growth problems. Children who are exposed to very high levels of lead often die.
Animals can also be poisoned when they eat grass and drink water contaminated with lead. In regions were animals are exposed to lead, people may continue to be infected from milk and meat products. Dr. Lora Davis is currently testing these products in the Zamfara region to see if they pose a risk of further poisoning in these communities.

Challenges in the Fight to Save Lives

This outbreak has been challenging for public health officials because it is difficult to remove lead from the environment. All of the contaminated soil must be removed from the villages and replaced with clean soil. This process is expensive, and some regions in Zamfara are still waiting for the contaminated soil in their villages to be removed. Since children cannot be treated for lead poisoning until the environment is clean, treatment has been delayed in some villages.
Mining is an important source of income for these villages. Since it is not possible to stop mining completely, it is important that mining is made safer for the communities. Public health officials have developed public health messages to educate people about the dangers of lead poisoning and how to prevent it.
Effective interventions have prevented many deaths, and thousands of children who were exposed to lead have been treated. Children will continue to be treated, and contaminated soil will continue to be removed from the remaining villages. The exposed children will also require long-term support. Although there are still many challenges, public health officials have made important progress in stopping this outbreak.
Publicado por salud equitativa en 5:25