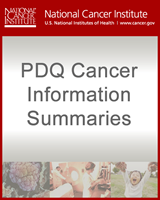 Health Professional Version
PDQ Cancer Genetics Editorial Board.
Published online: October 7, 2016.
This PDQ cancer information summary for health professionals provides comprehensive, peer-reviewed, evidence-based information about the genetics of breast and gynecologic cancers. It is intended as a resource to inform and assist clinicians who care for cancer patients. It does not provide formal guidelines or recommendations for making health care decisions.
This summary is reviewed regularly and updated as necessary by the PDQ Cancer Genetics Editorial Board, which is editorially independent of the National Cancer Institute (NCI). The summary reflects an independent review of the literature and does not represent a policy statement of NCI or the National Institutes of Health (NIH).
Go to:

This executive summary reviews the topics covered in this PDQ summary on the genetics of breast and gynecologic cancers, with hyperlinks to detailed sections below that describe the evidence on each topic.
Go to:

[Note: Many of the medical and scientific terms used in this summary are found in the NCI Dictionary of Genetics Terms. When a linked term is clicked, the definition will appear in a separate window.]
[Note: A concerted effort is being made within the genetics community to shift terminology used to describe genetic variation. The shift is to use the term “variant” rather than the term “mutation” to describe a genetic difference that exists between the person or group being studied and the reference sequence. Variants can then be further classified as benign (harmless), likely benign, of uncertain significance, likely pathogenic, or pathogenic (disease causing). Throughout this summary, we will use the term pathogenic variant to describe a disease-causing mutation. Refer to the Cancer Genetics Overview summary for more information about variant classification.]
[Note: Many of the genes and conditions described in this summary are found in the Online Mendelian Inheritance in Man (OMIM) database. When OMIM appears after a gene name or the name of a condition, click on OMIM for a link to more information.]
Among women, breast cancer is the most commonly diagnosed cancer after nonmelanoma skin cancer, and it is the second leading cause of cancer deaths after lung cancer. In 2016, an estimated 249,260 new cases will be diagnosed, and 40,890 deaths from breast cancer will occur.[1] The incidence of breast cancer, particularly for estrogen receptor–positive cancers occurring after age 50 years, is declining and has declined at a faster rate since 2003; this may be temporally related to a decrease in hormone replacement therapy (HRT) after early reports from the Women’s Health Initiative (WHI).[2] An estimated 22,280 new cases of ovarian cancer are expected in 2016, with an estimated 14,240 deaths. Ovarian cancer is the fifth most deadly cancer in women.[1] An estimated 60,050 new cases of endometrial cancer are expected in 2016, with an estimated 10,470 deaths.[1] (Refer to the PDQ summaries on Breast Cancer Treatment; Ovarian Epithelial, Fallopian Tube, and Primary Peritoneal Cancer Treatment; and Endometrial Cancer Treatment for more information about breast, ovarian, and endometrial cancer rates, diagnosis, and management.)
A possible genetic contribution to both breast and ovarian cancer risk is indicated by the increased incidence of these cancers among women with a family history (refer to the Risk Factors for Breast Cancer, Risk Factors for Ovarian Cancer, and Risk Factors for Endometrial Cancer sections below for more information), and by the observation of some families in which multiple family members are affected with breast and/or ovarian cancer, in a pattern compatible with an inheritance of autosomal dominant cancer susceptibility. Formal studies of families (linkage analysis) have subsequently proven the existence of autosomal dominant predispositions to breast and ovarian cancer and have led to the identification of several highly penetrant genes as the cause of inherited cancer risk in many families. (Refer to the PDQ summary Cancer Genetics Overview for more information about linkage analysis.) Pathogenic variants in these genes are rare in the general population and are estimated to account for no more than 5% to 10% of breast and ovarian cancer cases overall. It is likely that other genetic factors contribute to the etiology of some of these cancers.

Refer to the PDQ summary on Breast Cancer Prevention for information about risk factors for breast cancer in the general population.