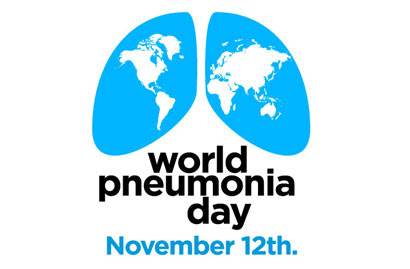 In 2014, inactivated poliovirus vaccine (IPV) campaigns were implemented in Nigeria and Pakistan after clinical trials showed that IPV boosts intestinal immunity in children previously given oral poliovirus vaccine (OPV). We estimated the effect of these campaigns by using surveillance data collected during January 2014–April 2016. In Nigeria, campaigns with IPV and trivalent OPV (tOPV) substantially reduced the incidence of poliomyelitis caused by circulating serotype-2 vaccine–derived poliovirus (incidence rate ratio [IRR] 0.17 for 90 days after vs. 90 days before campaigns, 95% CI 0.04–0.78) and the prevalence of virus in environmental samples (prevalence ratio [PR] 0.16, 95% CI 0.02–1.33). Campaigns with tOPV alone resulted in similar reductions (IRR 0.59, 95% CI 0.18–1.97; PR 0.45, 95% CI 0.21–0.95). In Pakistan, the effect of IPV+tOPV campaigns on wild-type poliovirus was not significant. Results suggest that administration of IPV alongside OPV can decrease poliovirus transmission if high vaccine coverage is achieved.
The live attenuated oral poliovirus vaccine (OPV) is cheap and easy to administer; therefore, it has been the vaccine of choice for the Global Polio Eradication Initiative. However, the immunogenicity and efficacy of OPV is reduced in tropical developing countries, perhaps as a result of the high burden of other enteric pathogens (1,2). Furthermore, although OPV offers lifelong protection against paralytic poliomyelitis, intestinal immunity against infection and poliovirus shedding appears to wane quite rapidly (3), meaning that OPV-immunized persons may contribute to community transmission of poliovirus (4,5). OPV also causes vaccine-associated paralytic poliomyelitis in ≈1 child per million vaccinated, and, in rare instances, may revert to a neurovirulent and transmissible form, causing outbreaks of poliomyelitis associated with vaccine-derived polioviruses (VDPV) (6,7).
In developing countries, seroconversion induced by inactivated poliovirus vaccine (IPV) is better than that induced by trivalent OPV (tOPV); thus, in these countries, IPV provides better protection against paralytic poliomyelitis (8,9). However, immunization with IPV alone induces very limited intestinal mucosal immunity against viral shedding compared with that induced by OPV, and therefore, IPV may be permissive to poliovirus circulation even when vaccination coverage is high (10,11). Recent studies showed that in children previously exposed to OPV (and therefore mucosally primed), the administration of 1 dose of IPV substantially boosted intestinal immunity against fecal shedding of poliovirus measured after challenge with the live attenuated OPV (12,13). Of note, this boost was greater than that observed after an additional dose of OPV.
These encouraging findings motivated the introduction, beginning in 2014, of IPV mass vaccination campaigns in Nigeria and Pakistan, 2 countries that had circulating VDPV and wild-type poliovirus at that time. However, it is not yet known whether the IPV boost of intestinal immunity observed against a challenge dose of vaccine (Sabin) poliovirus will translate to an effect of IPV campaigns on transmission of wild-type polioviruses and VDPVs at the community level.
To determine the effectiveness of campaigns using IPV+tOPV or tOPV alone in preventing the circulation of wild-type polioviruses or VDPVs, we analyzed poliovirus surveillance data for 2014–2016 from Nigeria and Pakistan. We report the results of that analysis and discuss their implications for the polio endgame strategy.

We defined the incidence rate ratio (IRR) for a campaign as the rate of reported poliomyelitis cases in the period after the campaign divided by the rate reported before the campaign. We focused on a 90-day period before and after the campaign, but we explored the sensitivity of our results to the choice of the length of this time period. We created a line-list containing every campaign for each district in Pakistan and Nigeria and recorded the 1) campaign location (district and state/province); 2) vaccine(s) used (i.e., IPV+tOPV, tOPV alone, bivalent OPV [bOPV] alone, or serotype-1 monovalent OPV [mOPV1] alone); 3) polio incidence before and after the campaign; and 4) length of the observation period. To avoid including information more than once in the statistical analysis, we censored data following entry into the line-listed database. To avoid bias, we entered campaigns with each vaccine(s) into the database in random order, according to a sequence of vaccine types (i.e., IPV+tOPV, tOPV, bOPV, mOPV); this system of entry maximized available information on campaigns that used IPV+tOPV and their effect compared with campaigns that used tOPV alone.
We used a Poisson regression model to estimate the IRR by vaccine type(s) administered in a campaign. The incidence of poliomyelitis in a district was modeled as a log-linear function of the following 3 independent variables: 1) an indicator variable (i) for whether observations were before or after a campaign; 2) the natural log of the number of child-years of observation (t) with a coefficient equal to 1, such that the incidence rate per child-year was modeled; and 3) an interaction term, such that the change in incidence after a campaign depended on a categorical variable (v) describing the type of vaccine(s) used in the campaign. We used a mixed-effects model with a random effect for each state or province and vaccine combination on the model intercept (baseline incidence). We fit this model using the lme4 package in the R statistical programming language [regression equation: n_cases ~ i:v + (1|state:v), offset(log(t)], where : indicates an interaction term and (1|state:v) indicates the random effect on the intercept) (16,17). We compared this mixed-effects regression model with a model that included only the fixed effects using the Akaike Information Criterion (AIC). We used a similar approach with a mixed-effects binomial regression model to estimate the prevalence ratio (PR) for the proportion of environmental samples that were positive for poliovirus isolation before and after campaigns with different vaccines.

Figure 1. Effect of mass vaccination campaigns with inactivated poliovirus vaccine plus trivalent oral poliovirus vaccine (IPV+tOPV) or tOPV alone on poliovirus detection in persons or the environment, Nigeria and Pakistan, 2014–2016. The...
In Nigeria, 5 campaigns with IPV+tOPV in different locations and at different scales took place during the analysis period, resulting in 55 district-campaign observations (Technical Appendix[PDF - 169 KB - 3 pages]Table 1). These campaigns used a total of 3.8 million doses of IPV and targeted children 14 weeks–59 months of age; although, 1 campaign included only children 6–35 months of age. The campaigns were followed by a reduction in the incidence of poliomyelitis associated with circulating VDPV serotype 2 (cVDPV2). The IRR, based on the mixed-effects regression, for cases in the 90 days after the campaigns compared with 90 days before the campaign was 0.17 (95% CI 0.04–0.78; p = 0.023) (Figure 1; Technical Appendix[PDF - 169 KB - 3 pages]Table 1). After these campaigns, the prevalence of cVDPV2 was reduced among environmental samples collected in the same districts as the campaigns; however, this reduction was not statistically significant (PR 0.16 based on the mixed-effects regression, 95% CI 0.02–1.33; p = 0.09). Campaigns with tOPV alone did not significantly reduce the incidence of poliomyelitis associated with cVDPV2 (IRR 0.59, 95% CI 0.18–1.97; p = 0.215 for comparison with IPV+tOPV campaigns), but they did significantly reduce the prevalence of cVDPV2 in the environment (PR 0.45, 95% CI 0.21–0.95; p = 0.369 for comparison with IPV+tOPV campaigns). As expected, campaigns with bOPV containing serotypes 1 and 3 did not show any effect on cVDPV2 prevalence or poliomyelitis cases. In areas of Nigeria where IPV campaigns were conducted, the number of polio cases associated with wild-type poliovirus (n = 1) was insufficient to enable a comparable analysis for this poliovirus type. Changing the length of time examined before and after each campaign did not substantially change the results. Reducing the period to < 90 days led to a loss of statistical power; increasing the period to 150 days, resulted in a statistically significant effect of IPV+tOPV campaigns on the prevalence of cVDPV2 in environmental samples (Technical Appendix[PDF - 169 KB - 3 pages]Table 2). 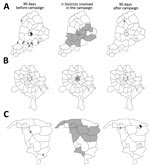