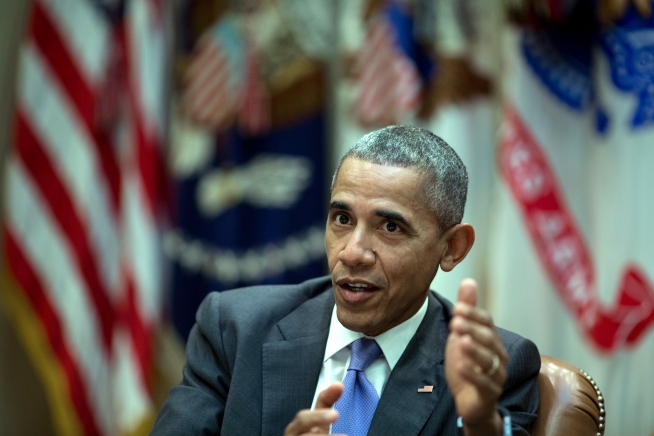 Image: Courtesy of the White House


Greetings from the National Library of Medicine and MedlinePlus.gov
Regards to all our listeners!
I'm Rob Logan, Ph.D., senior staff, U.S. National Library of Medicine (NLM).
Here is what's new this week in To Your Health - a consumer health oriented podcast from NLM - that helps you use MedlinePlus to follow up on weekly topics.
The U.S. Affordable Care Act resulted in a decline in Americans without health insurance as well as debt reductions, less growth in health costs, and other benefits, suggests an article written by U.S. President Barack Obama, recently published in the Journal of the American Medical Association.
We will focus on the data about the impact of the Affordable Care Act (or ACA) that President Obama reports and bypass a discussion of the policy and political implications of ACA that also are covered within the article.
To backup, ACA was initiated and became law in 2010 -during the first of President Obama's two terms as the U.S. President. The ACA is so associated with President Obama's administration that it is often called 'Obama care.' While originally the latter term was intended to be pejorative, it is now used by ACA's supporters.
President Obama explains the ACA has reduced the number of Americans without health insurance. For example, the President reports the uninsured health insurance rate declined by 43 percent — from 16 percent in 2010 to 9.1 percent in 2015.
The President writes (and we quote): 'This is by far the largest decline in the uninsured rate since the creation of Medicare and Medicaid five decades ago' (end of quote).
The President adds the U.S. Department of Health and Human Services estimates that 20 million more Americans gained health insurance within the last six years, or after the ACA became law.
The President notes 2.3 million young adults (before age 26) also added health insurance coverage that became possible under the ACA.
The President reports the ACA's other benefits include an increase in the percentage of Americans who now have a personal physician and as well as access to health care. The President suggests both increased significantly within the past six years.
In addition, the President finds the amount of debt sent to a collection agency has declined by an estimated $600-$1000 per person who now has Medicaid coverage.
Otherwise, the President explains the annual growth in per-enrollee Medicare spending has declined in recent years. The annual growth in per-enrollee Medicare spending declined from a mean of 4.7 percent each year from 2000-2005 (prior to the ACA's implementation) to about 2.4 percent a year.
Similarly, the President reports the mean per-enrollee growth in private insurance spending was 1.1 percent last year compared to about 3.4 percent annually from 2005-2010.
Moreover, the President notes the rate of hospital-acquired conditions (such as drug side effects, infections and pressure ulcers) declined by 17 percent comparing 2014 to 2010. During the same period, the President adds there were about 565,000 fewer hospital readmissions in the U.S.
The President concludes (and we quote): 'the ACA experience... makes me optimistic about this country's capacity to make meaningful progress on even the biggest public policy challenges' (end of quote).
Incidentally, the article is historic because it is the first time that a U.S. President has published in a refereed medical journal.
Meanwhile, you can learn more about health insurance and the ACA by turning to MedlinePlus.gov'shealth insurance health topic page.
A link to healthcare.gov, which is starting place to learn about ACA, is available within the 'start here' section of MedlinePlus.gov's health insurance health topic page. The Nemours Foundation also provides a primer about shopping for health insurance within the 'start here' section of MedlinePlus.gov's health insurance health topic page.
MedlinePlus.gov's health insurance health topic page additionally provides links to the latest pertinent journal research articles, which are available in the 'journal articles' section. Links to relevant clinical trials that may be occurring in your area are available within the 'clinical trials' section. You can sign up to receive updates about health insurance as they become available on MedlinePlus.gov.
To find MedlinePlus.gov's health insurance health topic page, please type 'health insurance' in the search box on MedlinePlus.gov's home page, then, click on 'health insurance (National Library of Medicine).' MedlinePlus.gov also has health topic pages devoted to Medicare and Medicaid.
Before I go, this reminder... MedlinePlus.gov is authoritative. It's free. We do not accept advertising .... and it is written to help you.
To find MedlinePlus.gov, just type 'MedlinePlus.gov' in any web browser, such as Firefox, Safari, Chrome, or Explorer, on any platform.
We encourage you to use MedlinePlus and please recommend it to your friends. MedlinePlus is available in English and Spanish. Some medical information is available in 48 other languages.
Your comments about this or any of our podcasts are always welcome.
Please email the podcast staff anytime at: NLMDirector@nlm.nih.gov
A written transcript of recent podcasts is available by typing 'To your health' in the search box on MedlinePlus.gov's home page.
The National Library of Medicine is one of 27 institutes and centers within the National Institutes of Health. The National Institutes of Health is part of the U.S. Department of Health and Human Services.
A disclaimer — the information presented in this program should not replace the medical advice of your physician. You should not use this information to diagnose or treat any disease without first consulting with your physician or other health care provider.
It was nice to be with you. Please join us here next week and here's to your health!
Publicado por salud equitativa en 5:21