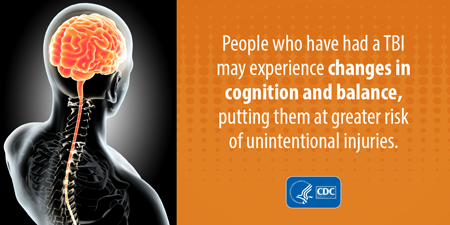 Previous research examining adults with moderate to severe traumatic brain injury (TBI) who participated in rehabilitation showed that they were twice as likely to die from an unintentional injury that occurred following their TBI, compared to individuals in rehabilitation of similar age, sex and race but without TBI. People who have had a moderate to severe TBI may experience changes in cognition and balance, which may put them at greater risk of subsequent unintentional injuries.
The August special issue of NeuroRehabilitation is dedicated to work on unintentional injury after a TBI with a focus on understanding injury risk related to changes in cognition, health, and behavior as a result of the TBI. It includes:
Learn More about TBI
Traumatic brain injury (TBI) is a serious public health problem in the United States. Each year, traumatic brain injuries contribute to a substantial number of deaths and cases of permanent disability. In 2010, there were 2.5 million emergency department visits, hospitalizations, and deaths due to a TBI that occurred either as an isolated injury or along with other injuries. Persistent health problems among those with a TBI contribute to limitations in function, disability, and reduced life quality, all of which can lead to increased injury risk.
CDC Articles Featured in this Special Issue
Publicado por salud equitativa en 4:35