We analyzed human papillomavirus (HPV) prevalences during prevaccination and postvaccination periods to consider possible changes in nonvaccine HPV genotypes after introduction of vaccines that confer protection against 2 high-risk types, HPV16 and HPV18. Our meta-analysis included 9 studies with data for 13,886 girls and women ≤19 years of age and 23,340 women 20–24 years of age. We found evidence of cross-protection for HPV31 among the younger age group after vaccine introduction but little evidence for reductions of HPV33 and HPV45. For the group this same age group, we also found slight increases in 2 nonvaccine high-risk HPV types (HPV39 and HPV52) and in 2 possible high-risk types (HPV53 and HPV73). However, results between age groups and vaccines used were inconsistent, and the increases had possible alternative explanations; consequently, these data provided no clear evidence for type replacement. Continued monitoring of these HPV genotypes is important.
Persistent infection with a high-risk human papillomavirus (HPV) genotype is necessary for development of cervical cancer (1). Two high-risk types, HPV16 and HPV18, cause ≈70%–80% of cervical cancers (2–4). The HPV vaccines currently available commercially have been shown in trial settings to have ≈100% vaccine efficacy against cervical disease caused by vaccine-specific high-risk HPV types: bivalent and quadrivalent vaccines against HPV16 and HPV18 and the new nonavalent vaccine against HPV31, HPV33, HPV45, HPV52, and HPV58 (5–7). Clinical trial data for the bivalent and quadrivalent vaccines have shown low-to-moderate protection (i.e., cross-protection) against other high-risk HPV types that are phylogenetically related to HPV16 and HPV18 (8,9).
Many countries have now introduced HPV vaccination programs (10). A recently published systematic review and meta-analysis assessed population-level effects of HPV vaccination on vaccine HPV types and showed strong evidence that HPV vaccination is highly effective against infections with these vaccine-specific high-risk types (11). The review also examined closely related HPV types as a single group and found evidence of cross-protection overall in a population-based setting (11). However, assessment of changes in the prevalence of closely related HPV types combined may not provide full evidence of the effects of a national vaccination program because examining the types as a single group potentially conceals decreases or increases in the prevalence of individual types. Grouping HPV types together limits the possibility of examining cross-protection provided by specific HPV types and of detecting changes in other individual nonvaccine types. For example, a theoretical concern is that reduced prevalences of infection with HPV16 and HPV18 could lead to other high-risk HPV types occupying those niches and becoming more common causes of disease. Although type replacement was not observed in the clinical trials (12), monitoring for possible type replacement in population-based settings after the introduction of national HPV vaccination programs is important. Furthermore, because nonvaccine HPV types are far less common than vaccine HPV types, a single study may have limited scope to determine whether type replacement has occurred. Combining data from several reports improves the ability to investigate type replacement. We aimed to investigate population-level effects of HPV vaccination programs that used bivalent or quadrivalent vaccines on type-specific prevalences of infection caused by individual nonvaccine high-risk HPV types.

Using data from surveys conducted before an HPV vaccination program was introduced and data from surveys after the program was introduced, we compared HPV prevalences for similar populations within the same country. We conducted a systematic literature search to determine changes in HPV prevalence for each nonvaccine high-risk HPV type. At the time of our search, any eligible study would have considered vaccination that used bivalent or quadrivalent vaccines; consequently, high-risk HPV types used only in the nonavalent vaccine were considered nonvaccine HPV types. Each individual type was presented separately in our analysis. We included HPV types for which some cross-protection had been demonstrated in clinical trials (HPV31 and HPV33, which are phylogenetically related to HPV16; and HPV45, which is phylogenetically related to HPV18) (8,9,13); other high-risk HPV types included in the nonavalent vaccine (HPV52 and HPV58); other high-risk and probably high-risk HPV types (HPV35, HPV39, HPV51, HPV56, HPV59, and HPV68); and other possibly high-risk HPV types (HPV26, HPV53, HPV70, HPV73, and HPV82), as classified by the International Agency for Research on Cancer (14). This systematic review and meta-analysis was reported in accordance with PRISMA guidelines (15).

Using Embase, Medline, LILACS, and African Index Medicus databases, we searched for eligible publications published from 2007, the year that the first HPV vaccination programs were introduced, through February 19, 2016. To identify relevant studies that mentioned both vaccination and HPV infection or a related disease (such as HPV-related precancerous lesions, cancers, and genital warts), the search strategy incorporated MeSH terms from the PubMed database (http://www.ncbi.nlm.nih.gov/mesh) and relevant words found in the title or abstract (Technical Appendix[PDF - 1.51 MB - 22 pages]). The search had no language restrictions.
Eligible studies were those that assessed population-level effects of HPV vaccination over time by comparing the prevalence of HPV infection (defined by the detection of HPV DNA in patient samples) during a prevaccination period with the prevalence during a postvaccination period. We excluded studies comparing HPV infection in vaccinated persons with HPV infection in unvaccinated persons as part of an individually randomized trial because such studies would not measure population-level effects. Similarly, we excluded studies in which HPV infection was compared only between unvaccinated and vaccinated persons in the postvaccination period. We also excluded studies in which only a small proportion (<2%) of the postvaccination study population was vaccinated (i.e., studies conducted in largely unvaccinated populations). One author (D.M.) initially reviewed titles and abstracts of studies for eligibility; we reviewed in full those studies that appeared to address changes in HPV prevalence after introduction of HPV vaccination programs. We also compared search results with those identified in a recent related review (11), which compared prevaccination and postvaccination periods for high-risk vaccine types (HPV16 and HPV18), cross-protected types (HPV31, HPV33, and HPV45), and all high-risk HPV nonvaccine types combined.

We used estimates weighted to account for selection processes if that data were available from authors (Tables and Figures in this article use unweighted numbers, except for Technical Appendix Table 1). We also stratified data by age group (i.e., <19 and 20–24 years of age) because of expected lower rates of vaccination coverage and lower vaccine effectiveness in those vaccinated at older ages. Consequently, for each study, we requested data from authors for the same 2 age groups. One study included data for girls <13 years of age, so we requested data restricted to those 16–19 years of age (17).
To enable calculation of a PR for a prevalence of 0 during either the prevaccination or postvaccination period, we used a continuity correction of 0.5. When prevalence was 0 for both the prevaccination and postvaccination periods, we excluded the study from the meta-analysis for the relevant age group and HPV type. Results were further stratified by type of vaccine used (i.e., bivalent or quadrivalent). PRs within each subgroup were combined to obtain a summary PR by using a fixed-effects model if data were not shown to be heterogeneous; lack of heterogeneity was determined by a p value >0.10 calculated with the Cochrane Q test or by an I2 value <25% (18). Sensitivity analyses were restricted to studies that used cervical, vulval, or vaginal swabs as specimen type because urine samples have lower sensitivity for detecting HPV DNA infection (19).

Figure 1. Flowchart for eligible studies included in systematic review and meta-analysis of changes in prevalences of nonvaccine human papillomavirus (HPV) genotypes after introduction of HPV vaccination. *100% title match, author’s surname and...
After we eliminated duplications, we identified 4,648 unique articles in searches from all 4 databases (Figure 1). An initial search of title and abstracts of these articles excluded 4,508 (97.0%) because of ineligibility. For the remaining 140 articles, we examined the full text to determine compliance with eligibility criteria and identified 10 eligible studies (Figure 1). Of these 10 studies, 1 met all eligibility criteria, but the type-specific PRs were unavailable from authors (20). Therefore, we included 9 studies in the systematic review and meta-analysis (16,17,21–27). All eligible studies were repeat cross-sectional studies that compared changes in prevalence in populations before and after introduction of a national HPV vaccination program (Technical Appendix[PDF - 1.51 MB - 22 pages] Table 1). Because only 1 study considered changes in HPV infection among male and female populations, we considered only female populations in the analysis. Two studies were population-based national surveys (23,26); 3 studies were conducted among young women obtaining chlamydia screening (16,17,27); 2 studies comprised young women attending a primary care clinic, community health center, or hospital-based adolescent clinic (21,22); and 2 studies comprised women obtaining cervical screening (24,25) (Technical Appendix[PDF - 1.51 MB - 22 pages] Table 1). The included studies contained data on 13,886 girls and women <19 years of age and 23,340 women 20–24 years of age.
The studies varied in methodologic quality on the basis of potential bias (Table 1). Most studies collected some demographic and sexual behavior data to enable appropriate adjustment of the relative risks, although the number of factors collected was limited in some studies (16,17,24,25) (Table 1; Technical Appendix[PDF - 1.51 MB - 22 pages] Table 1).

HPV Types with Prior Evidence for Cross-Protection 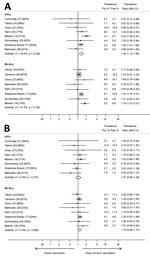 The authors thank Kavita Panwar, who performed the HPV testing for Mesher et al. (16).
This research was supported by Public Health England.