Q and A with Dr Peter Mason: Training researchers in Zimbabwe 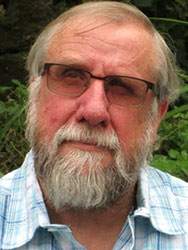 How has Fogarty built research capacity in Zimbabwe?
Without Fogarty, postgraduate clinical training in Zimbabwe would have collapsed. When we started the ICOHRTA in 2005, Zimbabwe had billion-percent inflation and no access to foreign currency to bring anything into the country, including materials you need to do science. Doctors, nurses, lecturers, teachers were going abroad. People couldn’t afford to go to hospital, so the wards in many teaching hospitals were empty and clinical teaching was affected.
ICOHRTA allowed us to pay postgraduate students U.S. dollar stipends to complete projects in AIDS, TB and opportunistic infections, and to pay their internet charges - which in Zimbabwe are among the most expensive in Africa. In 10 years, we’ve supported 54 postgraduate students conducting research in areas including the interactions between antiretrovirals and traditional herbs, prevention of mother-to-child transmission of HIV, and TB diagnosis in HIV patients, to name a few. Thirty-three of the students published at least one paper by the time the program ended in 2015. It’s thanks to Fogarty that we were able to keep them going.
Has the program slowed “brain drain”?
The great majority of our ICOHRTA fellows still work in Zimbabwe, and the great majority of those who left now work elsewhere in southern Africa. One example is Claver Bhunu. He completed his Ph.D. - in modeling in TB - as an ICOHRTA fellow and was awarded a postdoctoral fellowship at Cambridge University in England. We thought we’d never see him again. But he came back to Zimbabwe and became the head of the mathematics department at the university in Harare. He now has a nucleus of mathematical modelers in his department, producing a lot of research and papers.
How did your training programs develop?
We started BRTI because we saw the need for an organization run by people with a deeper commitment to developing local research skills than visiting scientists, some of whom would come in, collect specimens, leave - and that was the last we heard of them. 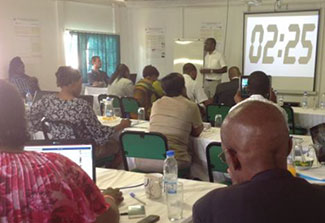 Photo courtesy of Dr. Peter Mason
The Biomedical Research and Training Institute provided
training courses on a variety of topics as a part of its
Fogarty ICOHRTA grant.
It used to be that postgraduate students were expected to get on with their research and learn how to do it by doing it. But we recognized that to become good researchers, they needed academic training in research methods, design, statistics and presentations and writing papers. So we designed short, 3- to 5-day courses to teach those skills.
We also sent researchers overseas for short periods to train in a laboratory. Initially we sent them to the U.S. or Europe, but as the program went on, we decided to send them to labs in Africa, which do not have the same amenities as a U.S. or European lab - things like good electricity and water supply, someone who calibrates your instruments on a regular basis, the ability to have supplies delivered in a couple of days. Our thinking was if you’re going to do research in Africa, it’s better to learn to do it the way it’s done in Africa.
What training materials were developed?
All our short courses are put onto CDs, which we encourage people to take back to their institutions to share with others. Our teachers use interactive methods - case studies, role play, videos - and we have produced some videos ourselves, especially in ethics, which is a big part of our training.
We’ve developed an ethics handbook and ethics training program. Also, we’ve created programs on point-of-care testing for HIV and TB, and held many forums, including a symposium on breastfeeding and HIV when the prevention of mother-to-child transmission program was starting in Zimbabwe. Several interactive research programs came about as a result of our bringing international researchers to Zimbabwe for discussions with local researchers.
Through our programs, we’ve allowed international researchers to see that, although Zimbabwe gets some bad press, it is actually an extremely good place to do research. We have a lot of people and a lot of problems, and those are the two things you need to do good research.