A new spotlight article is available on CDC's flu website about four recent human infections with flu viruses that normally circulate in swine. This spotlight provides information about the recent H3N2v virus infections in humans and includes links to fact sheets explaining how you can protect yourself if you're planning to attend a fair or other setting where pigs will be present. 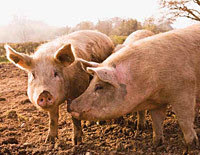 
August 12, 2016 – Four human infections with influenza viruses that normally circulate in swine (swine influenza) were reported by CDC this week. When swine influenza viruses are detected in people they are called “variant” viruses and are designated with a letter v at the end of the virus subtype. The four human infections were caused by H3N2v viruses in Ohio (2) and Michigan (2). All four patients reported attending fairs where they had exposure to pigs during the week preceding illness onset. Pigs at the fairs have reportedly tested positive for swine influenza A (H3N2) infection. The Ohio patients are not related other than both of them reporting having attended the same fair in Ohio. Similarly the Michigan cases both attended the same fair in Michigan, but are otherwise unrelated to each other. CDC is working with state public health officials to support their human health responses and hasrecommendations for the public on what steps they can take to help protect against H3N2v and other swine influenza viruses.
Swine Influenza is a respiratory disease of pigs caused by type A influenza viruses that cause outbreaks in pigs. Signs of swine flu in pigs can include fever, coughing (barking), sneezing, breathing difficulties, eye redness or inflammation, and not eating. Some pigs infected with influenza, however, may show no signs of illness at all.
Swine flu viruses do not normally infect people; however, sporadic human infections with these viruses have occurred. Human infections with H1N1v, H3N2v and H1N2v viruses have been detected in the United States. Spread between pigs and people is thought to happen mainly when an infected pig (or human) coughs or sneezes and droplets with influenza virus in them spread through the air. If these droplets land in the nose or mouth, or are inhaled, that person (or pig) could be infected. There also is some evidence that the virus might spread by touching something that has virus on it and then touching the mouth or nose. A third way to possibly get infected is to inhale particles containing influenza virus. Influenza has not been shown to be transmissible to people through eating properly handled and prepared pork (pig meat) or other products derived from pigs.
Most commonly, human infections with variant viruses occur in people with exposure to infected pigs (e.g., at a fair or at work). Illness associated with variant virus infection includes symptoms similar to those of seasonal flu. Most illness has been mild, but as with seasonal flu, hospitalization and death can occur. There have been documented cases of multiple people becoming sick after exposure to one or more infected pigs and also cases of limited spread of variant influenza viruses from person to person.
Human infections with a non-human influenza virus should be fully investigated to be sure that such viruses are not spreading in humans in an efficient and ongoing way, and to limit further exposure of humans to infected animals if infected animals are identified. At this time, the epidemiology of the human infections reported this week seems consistent with what has been in the past. None of the most recent infections were hospitalized and there were no deaths. CDC is conducting laboratory studies to find out more about these viruses.
Agricultural fairs take place across the United States every year, primarily during the summer months and into early fall. Many fairs have swine exhibitions, where pigs from different places come in close contact with each other and with people. These venues may magnify the risk of spread of influenza viruses between pigs and people. The number of variant virus infections reported in humans has varied from season to season. During the summer of 2012, 309 human infections with H3N2v viruses were detected. Subsequently 19 infections of H3N2v were detected in 2013, and only 3 infections each were detected during 2014 and 2015.
Some people are at high risk of developing serious illness from variant virus infections, just as they are from seasonal influenza. This includes young children, people with underlying health conditions like asthma, diabetes or heart disease, pregnant women and people who are 65 and older. In order to reduce the possible risk of serious illness to people posed by interactions between people and pigs at fairs, CDC recommends that people at high risk for serious flu complications avoid pigs and swine barns at fairs. During the 2012 H3N2v outbreaks, 16 people were hospitalized and one person died from H3N2v infection. Most of those people were at high risk for serious flu complications.
The 2016-2017 seasonal flu vaccine is not formulated to provide protection against H3N2v. CDC recommends annual seasonal influenza vaccination for everyone 6 months and older to protect against seasonal flu viruses. The same influenza antiviral drugs used to treat seasonal flu can be used to treat variant virus infection in children and adults. The currently recommended drugs – oseltamivir, peramivir, and zanamivir – are available by prescription only. Early treatment works better and is especially important for people who are very ill or who are at high risk of serious flu complications.
CDC has information and guidance for local and state public health officials regarding the surveillance and investigation of human infections with H3N2v virus, and will share updated information if the situation changes.
Publicado por salud equitativa en 8:22