Survival and Growth of Orientia tsutsugamushi in Conventional Hemocultures

Orientia tsutsugamushi, which requires specialized facilities for culture, is a substantial cause of disease in Asia. We demonstrate that O. tsutsugamushi numbers increased for up to 5 days in conventional hemocultures. Performing such a culture step before molecular testing could increase the sensitivity of O. tsutsugamushi molecular diagnosis.
Orientia tsutsugamushi, the causative agent of scrub typhus, has long been a pathogen of major public health concern in the Asia-Pacific region (1,2). Reports from India, China, and Southeast Asia suggest that a substantial proportion of fevers and central nervous system infections are caused by this bacterium (3,4). The World Health Organization has called scrub typhus “probably one of the most underdiagnosed and underreported febrile illnesses requiring hospitalization in the region” (5). Furthermore, Orientia-infected patients are emerging outside the so-called tsutsugamushi triangle, from the Middle East, Africa, and South America (6–8). Orientia spp. DNA was recently detected in rodents from Asia, Europe, and Africa (9).
To improve patient management and clarify the epidemiology and pathogenicity of O. tsutsugamushi, physicians and researchers need sensitive and specific diagnostic tools (10). The current diagnostic reference standard is a 4-fold antibody rise between acute- and convalescent-phase serum samples; however, because results are determined retrospectively, they cannot influence patient management. O. tsutsugamushi is an intracellular pathogen, and traditionally its growth has been assumed to require specialized cell culture at Biosafety Level 3, which is only available at a limited number of specialized centers. Therefore, molecular detection of O. tsutsugamushi in patients’ EDTA-blood buffy coat has become the tool of choice for routine diagnosis and epidemiologic studies (11,12). In other pathogens with low bacterial loads, propagation of the organism before molecular amplification has increased target density and improved sensitivity of diagnostic tools such as quantitative PCR (qPCR) or isolation in cell cultures (13). In line with these findings, we hypothesized that O. tsutsugamushi can survive and potentially grow in conventional hemoculture media within the co-inoculated human host cells and that this capacity for growth could be used to improve diagnostic and analytical sensitivities.

We conducted this study at the Microbiology Laboratory, Mahosot Hospital, Vientiane, Laos, the only microbiology laboratory in Vientiane with a routine, accessible hemoculture service for sepsis diagnosis (4,14). Study patients provided written informed consent; ethical approval was granted by the Oxford Tropical Research Ethics Committee, University of Oxford (Oxford, UK), and the National Ethics Committee for Health Research, Laos.
One pair of hemocultures was incubated aerobically at 35°C–37°C for 7 days. As part of a weekly routine molecular diagnostic service, admission EDTA anti-coagulated buffy coats (≈200 μL) from febrile patients were collected to test for O. tsutsugamushi and Rickettsia spp. by qPCR (11). Serial dilutions of plasmids (pGEM-T Vector Systems; Promega, Southhampton, UK) and nontemplate controls were included in all runs as external controls; they always showed the appropriate result. During the 2014 rainy season (May–October), we collected consecutive hemoculture fluids after 24 h of incubation (0.5 mL/bottle; total 1 mL/patient; n = 760) (15). Each aliquot contained ≈0.1 mL blood or 0.01 mL buffy coat per mL media. If the EDTA buffy coat qPCR result (cycle quantitation value≤40) was positive within the 7-day hemoculture incubation period (n = 11), the respective bottles were sampled at subsequent times so PCR positivity could be estimated (Table).
Hemoculture fluids were centrifuged (10 min at 15,900 × g) to pellet intracellular and extracellular bacteria, and DNA was extracted by using a method that removes inhibitors with benzyl alcohol (guanidine hydrochloride lysis/column extraction) (16). The same qPCR protocols were used for buffy coat (1 μL/reaction) and hemoculture fluids (7 µL/reaction), with bovine serum albumin (40 μg/reaction) added in the latter (11,13). We estimated bacterial loads using plasmid standard curves and calculated bacterial multiplication factor by dividing bacterial numbers, at follow-up days, by the number in the first sample.
Of the 760 buffy coat samples, 21 were positive for O. tsutsugamushi by qPCR; therefore, to estimate survival and growth, we collected aliquots of hemoculture fluids during days 1–7 (n = 11). During that period, 100/760 (13%) hemocultures were positive for other organisms; however, none of the known O. tsutsugamushi–infected patients were co-infected with an alternative pathogen. In addition, hemoculture fluids from the first 277 patients with buffy coats negative for O. tsutsugamushi by qPCR, underwent O. tsutsugamushi qPCR testing to explore whether using hemoculture fluids as an additional diagnostic sample could improve molecular detection of O. tsutsugamushi. 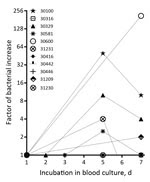 Our findings suggest that O. tsutsugamushi remains viable and growing in hemoculture, presumably in human leukocytes. This observation opens up new possibilities for detecting O. tsutsugamushi and other intracellular organisms, albeit seemingly not Rickettsia spp. With the discovery of Orientia spp. outside the tsutsugamushi triangle, improved tools are needed to aid the timely identification of infections in disease-endemic communities and among returning travelers to facilitate appropriate treatment (4). In areas without sophisticated laboratory facilities, the combination of hemoculture amplification and direct diagnostic (e.g., antigen capture) has been proposed for simplified Salmonella enterica serovar Typhi diagnosis and resistance molecular screening (13). Similarly, innovative approaches to identify O. tsutsugamushi infections after >1 days could be developed. Because O. tsutsugamushi is categorized as a Hazard Group 3 pathogen, sampling and processing of hemocultures from patients with suspected scrub typhus should be conducted with appropriate biosafety precautions.
Furthermore, the possibility of using hemoculture as a simple transport tool for samples from remote areas should be investigated. Clinical isolates from remote areas can also show O. tsutsugamushi diversity, which can guide the development of diagnostic tests and vaccines (3).
The underlying mechanisms and the reason O. tsutsugamushi, but not Rickettsia spp., grows in hemoculture fluid are unclear. We compared the diagnostic possibilities of preincubating blood samples in hemoculture fluid before qPCR with using qPCR on buffy coat samples to investigate its advantage as a diagnostic tool. Further investigations are needed to confirm our findings, explore whether O. tsutsugamushi really multiplies in hemoculture fluids, and assess multiplication rates of host cells and pathogens in these fluids. Such studies can provide evidence for the optimal system and number of incubation days that would maximize the effects for the O. tsutsugamushi diagnostic. These findings could also affect the detection of other underdiagnosed intracellular pathogens that scientists assume cannot be detected in hemoculture fluids.
Dr. Dittrich is a molecular microbiologist with a specific interest in infectious disease diagnostics. This work was carried out while she was working the University of Oxford based in Laos, where her main focus was to understand the causative agents of disease and improve diagnostic tools for their detection. She currently works as a senior scientific officer in the Acute Febrile Illness Program at the Foundation of Innovative New Diagnostics (FIND) in Geneva, Switzerland.

We are grateful to all the doctors and nursing staff of Mahosot Hospital, the staff of the Microbiology Laboratory, and Daniel Paris. We also thank the Directors of Mahosot Hospital, the Minister of Health, and the Director of the Curative Department, Ministry of Health, for their support in this study. We acknowledge Jeanne Salje for inspiring discussions during the analysis and writing up the results of this project.
This study was funded by the Wellcome Trust of Great Britain.