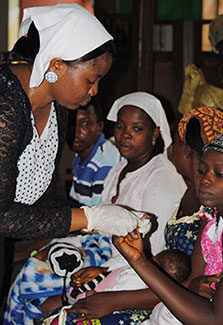 Photo by Dina Patel/
HealthySunrise Foundation
An expectant mother in Nigeria is tested
for HIV while attending a “baby shower,”
at a church, where free HIV tests and
prenatal care are offered.
> Download full image file [JPG, 4M] for
use with acknowledgement.

An emerging field, known as implementation science, may help reduce the nearly 150,000 instances of mother-to-child HIV transmissions that occur annually around the world, mostly in developing countries. A team of scientists and program managers, led by the National Institutes of Health (NIH), has been studying a variety of implementation science approaches to prevent mother-to-child transmission and has published the results in a 16-article open-access supplement to the Journal of Acquired Immune Deficiency Syndromes. In implementation science, scientists study how to integrate research findings and other evidence-based practices into routine care and services.
“We have the tools at this moment to further decrease incidence of new infections, but we need to apply these tools more effectively to reach the undiagnosed and untreated mothers,” Fogarty Director, Dr. Roger I. Glass, and U.S. Global AIDS Coordinator, Dr. Deborah Birx, wrote in a foreword to the supplement.
Preventing mother-to-child transmission (PMTCT) involves a cascade of factors that is inherently complex, crossing multiple biological phases for women and their infants - during pregnancy and after delivery - and requires deployment of multiple health services. Some studies used systems engineering approaches to examine treatment workflow, identify bottlenecks and gaps, task shifting options and other issues. Facility-level problems were considered, including drug shortages, overburdened staff, lack of service integration, insufficient mentoring, and poor patient-provider interactions. The scientists also identified domestic violence, abandonment and stigma as key barriers.
The authors reported on the effectiveness of a variety of interventions: 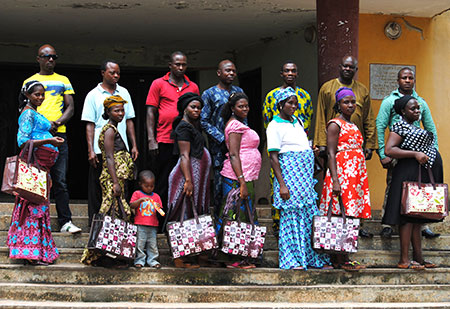 Photo by Dina Patel/HealthySunrise Foundation
A study showed involving men in prenatal care improves outcomes for
mothers and infants, and increases the likelihood the male partners will
be tested for HIV.
> Download full image file [JPG, 5M] for use with acknowledgement.

Researchers and policymakers from the United States and Africa who contributed to the supplement articles were part of the PMTCT Implementation Science Alliance, created and supported by the NIH and the President’s Emergency Plan for AIDS Relief (PEPFAR), to investigate the role implementation science can play in enhancing the quality and effectiveness of PMTCT efforts. Research projects described in the supplement were funded by NIH grants from the Eunice Kennedy Shriver National Institute of Child Health and Human Development (NICHD), National Institute of Allergy and Infectious Diseases (NIAID), National Institute of Mental Health (NIMH) and the Office of Research on Women’s Health (ORWH). 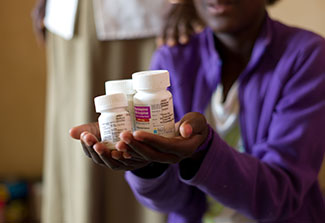 © UNICEF/UNI103221/Nesbitt
Increasing the number of HIV-infected women who adhere
to antiretroviral therapy is key to the prevention of mother-
to-child transmission (PMTCT) effort.
The alliance was led by the Fogarty’s Center for Global Health Studies. In addition to the funders, other participants in the alliance include, the Office of AIDS Research at NIH, along with outside agencies including the Centers for Disease Control and Prevention, the Elizabeth Glaser Pediatric AIDS Foundation, South Africa’s Anova Health Institute, the United States Agency for International Development (USAID) and the WHO.
Despite enormous successes in PMTCT, important challenges remain. The scientists have identified priority areas for future study, including how to optimize linkage of HIV-positive infants into early treatment, improve models for retention and adherence of children receiving antiretrovirals, and prioritize locally driven research questions and processes that engage end users throughout.
“Continuing to find innovative ways to foster collaboration of implementation science researchers with decision makers and program implementers will be critical to speed the translation of effective PMTCT interventions in the local context and health system programs,” the authors concluded.

About the Fogarty International Center: the Center addresses global health challenges through innovative and collaborative research and training programs and supports and advances the NIH mission through international partnerships. For more information, visit www.fic.nih.gov.
About the National Institutes of Health (NIH): NIH, the nation's medical research agency, includes 27 Institutes and Centers and is a component of the U.S. Department of Health and Human Services. NIH is the primary federal agency conducting and supporting basic, clinical, and translational medical research, and is investigating the causes, treatments, and cures for both common and rare diseases. For more information about NIH and its programs, visit www.nih.gov.
NIH…Turning Discovery Into Health®
###