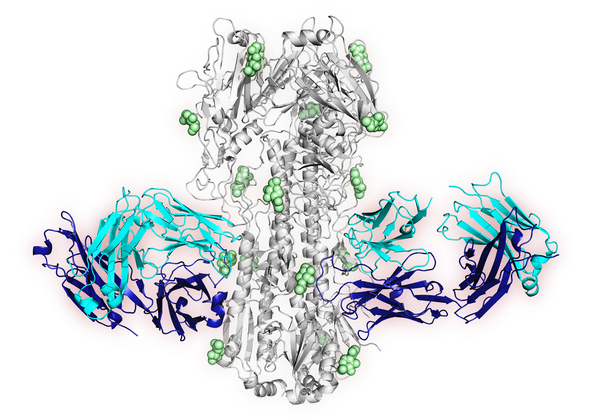 X-ray crystal structure image of one of the newly-identified antibodies. Credit: NIAID VRC

Scientists from the National Institute of Allergy and Infectious Diseases (NIAID), and the National Human Genome Research Institute (NHGRI) have identified three types of vaccine-induced antibodies that can neutralize diverse strains of influenza virus that infect humans. The discovery will help guide development of a universal influenza vaccine, according to investigators. The findings appear in the July 21st online edition of Cell.

Data May Help Guide Development of a Universal Flu Vaccine

X-ray crystal structure image of one of the new signature antibodies. The blue ribbons show antibody 16.a.26 Fab regions. The grey ribbons represent HA of influenza strain 1968 Hong Kong. The green spheres are glycans.
Credit: NIAID VRC
View larger image.
​WHAT:
Scientists have identified three types of vaccine-induced antibodies that can neutralize diverse strains of influenza virus that infect humans. The discovery will help guide development of a universal influenza vaccine, according to investigators at the National Institute of Allergy and Infectious Diseases (NIAID), and the National Human Genome Research Institute (NHGRI), both part of the National Institutes of Health (NIH), and collaborators who conducted the research. The findings appear in the July 21st online edition ofCell.
The seasonal influenza vaccine must be updated each year because flu viruses mutate. However, the stem region of the virus typically remains unchanged, making it an ideal target for antibodies induced by a universal flu vaccine. Such a vaccine would be effective against multiple subtypes of influenza and therefore would eliminate the need to update the vaccine each year. Until now, scientists had only identified broadly neutralizing antibodies targeting the flu virus stem in humans following natural infection. The new research provides clear evidence that these antibodies can be induced by a vaccine.
The investigators examined blood samples from six people who had received a vaccine against H5N1 influenza, commonly known as the bird flu virus. In the blood samples they identified B cells (a type of white blood cell that responds to infection by secreting antibodies) that reacted to various subtypes of influenza virus, and then characterized and classified the cells’ antibody genetic sequences. The scientists discovered the B cells encoded three classes of antibodies—seen among multiple participants—that can neutralize diverse influenza virus subtypes and, therefore, could form the basis of a universal flu vaccine. Researchers can now use the B cell sequencing information they identified to quickly and accurately measure immune responses among participants in future influenza vaccine trials, according to the authors.
ARTICLE:
MG Joyce et al. Vaccine-Induced Antibodies that Neutralize Group 1 and Group 2 Influenza A Viruses. Cell DOI: 10.1016/j.cell.2016.06.043 (2016).
WHO:
NIAID Director Anthony S. Fauci, M.D., and M. Gordon Joyce, Ph.D., from NIAID’s Vaccine Research Center, are available for comment.
CONTACT:
To schedule interviews, please contact Jennifer Routh, (301) 402-1663, niaidnews@niaid.nih.gov.
NIAID conducts and supports research—at NIH, throughout the United States, and worldwide—to study the causes of infectious and immune-mediated diseases, and to develop better means of preventing, diagnosing and treating these illnesses. News releases, fact sheets and other NIAID-related materials are available on the NIAID website.
About the National Institutes of Health (NIH): NIH, the nation's medical research agency, includes 27 Institutes and Centers and is a component of the U.S. Department of Health and Human Services. NIH is the primary federal agency conducting and supporting basic, clinical, and translational medical research, and is investigating the causes, treatments, and cures for both common and rare diseases. For more information about NIH and its programs, visit www.nih.gov.