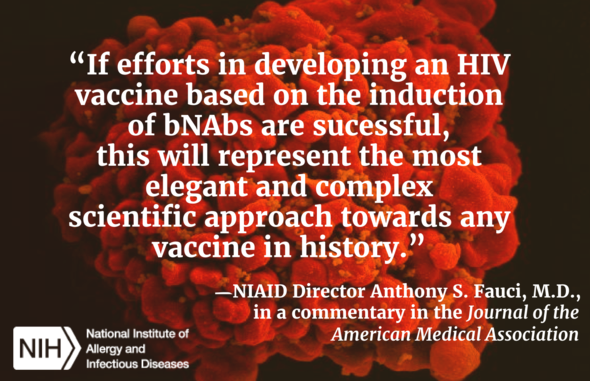 HIV poses unique challenges to and demands innovative approaches from vaccine researchers, according to a new commentary by National Institute of Allergy and Infectious Diseases Director Anthony S. Fauci, M.D., in the Journal of the American Medical Association. Dr. Fauci explains that because the body does not readily make an adequate immune response to HIV infection, creating a preventive HIV vaccine remains a formidable task for researchers. To succeed in this endeavor, he adds, scientists have responded with complex, creative and elegant approaches unparalleled in other vaccine research pursuits.

Virus Poses Unique Challenges, Demands Innovative Strategies
​WHAT:
The development of an effective vaccine to prevent HIV infections would represent a critical step toward ending the HIV/AIDS pandemic. Thus far, the only large clinical trial for an HIV vaccine to show promise was the RV144 study conducted in Thailand in 2009, which resulted in a modest 31 percent reduction in infection. Researchers are working to improve on the results of RV144 and also have launched efforts to create vaccines that induce broadly neutralizing antibodies that can block a wide range of HIV variants. However, because the body does not readily make an adequate immune response to HIV infection, creating a preventive HIV vaccine remains a formidable challenge for researchers. To succeed in this endeavor, scientists have responded with complex, creative and elegant approaches unparalleled in other vaccine research pursuits, according to a new commentary from Anthony S. Fauci, M.D., director of the National Institute of Allergy and Infectious Diseases (NIAID), part of the National Institutes of Health.
Dr. Fauci explains that certain immune cells (B cells) typically produce neutralizing antibodies (NAbs) to most viruses within days or weeks of infection. These NAbs allow the infected person to clear that viral strain and enjoy lifelong immunity. This principle is used to create most viral vaccines, in which the killed or weakened virus itself or selected immunogens—benign components of virus—are used to induce the production of NAbs without establishing an infection. People infected with HIV, however, do not readily produce Nabs and when they do, they are not produced in sufficient time to clear or even control the infection. Because of this, efforts to vaccinate individuals with HIV immunogens and coax their immune systems to establish protective NAbs have not yet been successful.
To overcome these difficulties, HIV vaccine researchers employ methods and technologies rarely seen in other branches of vaccine research, such as rigorous analyses of the B cell repertoire and its evolution and sophisticated structural biological techniques that determine precise molecular conformation of viral components and their interaction with NAbs. Dr. Fauci writes that the breadth and diversity of efforts to establish broadly neutralizing HIV antibodies in the absence of infection will be remembered, if successful, as the most elegant and complex approach toward the development of a vaccine in history. If unsuccessful, these efforts will offer comprehensive evidence that it will be unlikely that a vaccine will be able to induce broadly neutralizing antibodies. Hopefully, the former and not the latter will be the case.
ARTICLE:
AS Fauci. An HIV vaccine: Mapping uncharted territory. Journal of the American Medical Association DOI: 10.1001/jama.2016.7538 (2016).
WHO:
NIAID Director Anthony S. Fauci, M.D., is available for interviews.
CONTACT:
To schedule interviews, please contact Judith Lavelle, (301) 402-1663, niaidnews@niaid.nih.gov.
Publicado por salud equitativa en 11:33