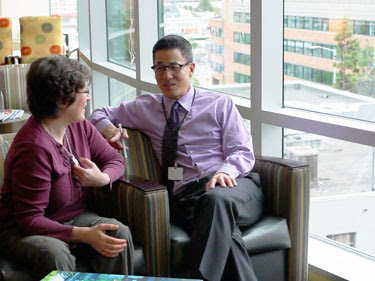 New study results show that many patients with advanced, incurable cancer have a poor understanding of their prognosis. But, those who did discuss it with their doctors were more likely to understand the serious nature of their illness.

New study results show that many patients with advanced, incurable cancer have a poor understanding of their prognosis or life expectancy. Fewer than one in four patients in the study reported having a recent discussion about prognosis with their oncologist, although those who did were more likely to understand the serious nature of their illness, the study showed.
“To our knowledge, our study is the first to directly address and demonstrate these associations between the timing of patient-reported prognostic discussions and improvements in illness understanding by patients,” the study authors wrote in a paper published May 23 in the Journal of Clinical Oncology.
The findings suggest that many people with terminal cancer “don’t understand basic information about where they are in the illness trajectory and have unrealistic expectations of treatment outcome,” said study leader Holly Prigerson, Ph.D., of Weill Cornell Medicine in New York.
“Patients have a right to know the status of their illness and the likely outcomes of treatment so that they can make informed decisions about their care,” continued Dr. Prigerson, who directs the Center for Research on End-of-Life Care at Weill Cornell.

To evaluate how well patients understand their prognosis, Dr. Prigerson’s team interviewed 178 adults with advanced solid cancers before and after they met with their oncologists to discuss the results of recent scans done to assess disease progression. The patients, recruited from nine U.S. cancer centers, were participants in the NCI-funded Coping with Cancer II study. Most had either lung or gastrointestinal cancer, and all had a life expectancy of 6 months or less, as estimated by their oncologists.
At both pre- and post-scan interviews, the researchers asked the patients four questions that assessed whether they understood that they had a terminal illness, that the disease was incurable, that they had advanced disease, and that their life expectancy was months, not years. During the post-scan interviews, patients also were asked whether they had discussed their prognosis or life expectancy at their recent oncology visit or during past visits.
The researchers assigned a score of 0 or 1 for inaccurate or accurate responses to each of the four questions and added the scores to give a maximum “illness understanding score” of 4. The difference in scores between pre- and post-scan visits was used to define changes in illness understanding.
Overall, the researchers found, study participants had improvements in illness understanding after the post-scan appointment. However, improvements in understanding were statistically significant only if patients reported having at least a recent discussion about prognosis or life expectancy with their oncologist.
Of the 178 participants, 24 (13%) reported both recent and past discussions about prognosis with their oncologist, 18 (10%) had only recent discussions, and 68 (38%) had only past discussions. The remaining 68 (38%) reported never having such discussions.
A follow-up analysisExit Disclaimer of the same study, presented earlier this month at the American Society of Clinical Oncology annual meeting in Chicago, showed that “the messenger matters, too,” Dr. Prigerson said. Patients who reported discussing their scan results with an oncologist versus another member of their care team were approximately four times more likely to recognize that their disease was at a late or end stage.

“Dr. Prigerson’s team showed not only how important these prognosis conversations are, but also how often they don’t happen,” commented Wen-Ying Sylvia Chou, Ph.D., M.P.H., of NCI’s Division of Cancer Control and Population Sciences.
Dr. Chou oversees NCI-funded projects on patient-provider communication and health literacy. “In research that has delved into these clinical interactions,” she said, “it has become clear that the key issue is about patients’ understanding of the goals of care. And you can’t adequately understand the goals of care without knowing your diagnosis and your prognosis.”
The delicate task of conveying a terminal cancer prognosis to patients and their loved ones is difficult, for a variety of reasons. “Palliative care, hospice, and talking about quality of life are important topics, but I think often these topics are stigmatized, and that’s a more societal and cultural issue that we need to address,” Dr. Chou said.
Furthermore, some oncologists worry that conveying bad news will make patients anxious or depressed. However, Dr. Prigerson said, she and others have shown that patients don’t have worse depression, anxiety, or quality of life as a result of such conversations. Nor do these discussions appear to harm the doctor-patient relationship.
But not all patients are ready to have such discussions. For instance, Dr. Prigerson said, “There are cultural groups in which discussing death and cancer are taboo.” In addition, many religiously devout patients believe their fate is in God’s hands and are less likely to accept bad news from their doctor.
To help address ethnic and racial differences in readiness to discuss death, Dr. Prigerson’s team is developing videos in which patients and their families share stories about the impact that different treatment options had on their own quality of life. The goal of the videos is to help inform the decisions of other patients who may be more likely to accept information from people like themselves.

How the Message is Conveyed Also Matters

NCI is supporting research that looks at the physician side of the doctor-patient equation, including a study to analyze transcripts of discussions about prognosis and treatment goals between oncologists and patients with advanced cancer. The study showed that oncologists rarely discuss prognosis with their patients, or have only brief discussions about it and then move on to other topics such as treatment logistics. In addition, oncologists often used ambiguous language about prognosis and treatment goals that emphasized optimism and hope, possibly establishing unrealistic expectations among patients.
Other NCI-supported studies are focusing on developing and testing ways to improve doctor-patient communication. One example is the Oncotalk programExit Disclaimer, aimed at improving discussions about palliative care, which was developed by James Tulsky, M.D., of Harvard Medical School. Another study, led by Ronald Epstein, M.D., at the University of Rochester, is testing a coaching intervention for oncologists, patients with advanced cancer, and their caregivers that promotes communication about prognosis and treatment choices.
“One important area is listening and establishing a relationship with a patient,” Dr. Chou said. “Patients’ values can change and evolve—they’re not static—and patients may have changing priorities. If we have a system where we can regularly and readily assess that, we may be able to better adhere to their values” when having these often-difficult conversations.