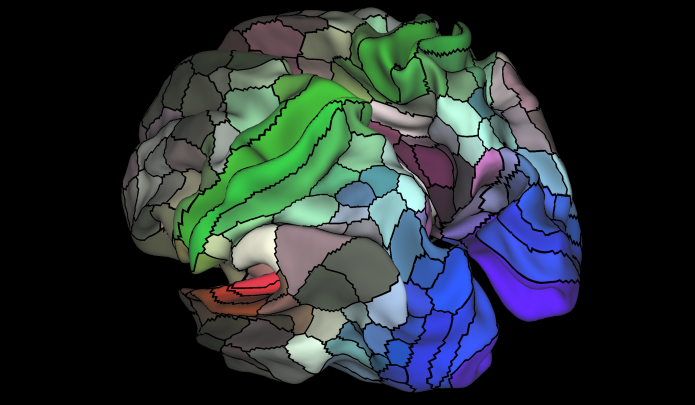 Neuroscientists have been working for a long time to figure out how the human brain works, and that has led many through the years to attempt to map its various regions and create a detailed atlas of their complex geography and functions. While great progress has been made in recent years, existing brain maps have […]

Caption: Map of 180 areas in the left and right hemispheres of the cerebral cortex.

Credit: Matthew F. Glasser, David C. Van Essen, Washington University Medical School, Saint Louis, Missouri
Neuroscientists have been working for a long time to figure out how the human brain works, and that has led many through the years to attempt to map its various regions and create a detailed atlas of their complex geography and functions. While great progress has been made in recent years, existing brain maps have remained relatively blurry and incomplete, reflecting only limited aspects of brain structure or function and typically in just a few people.
In a study reported recently in the journal Nature, an NIH-funded team of researchers has begun to bring this map of the human brain into much sharper focus [1]. By combining multiple types of cutting-edge brain imaging data from more than 200 healthy young men and women, the researchers were able to subdivide the cerebral cortex, the brain’s outer layer, into 180 specific areas in each hemisphere. Remarkably, almost 100 of those areas had never before been described. This new high-resolution brain map will advance fundamental understanding of the human brain and will help to bring greater precision to the diagnosis and treatment of many brain disorders.
Our most unique human traits, such as language and abstract thinking, are rooted in the cerebral cortex. This convoluted sheet of grey matter comprises nearly 80 percent of our brain mass with an estimated 16 billion neurons packed into its two hemispheres. Because studying this complex neural landscape has been so incredibly challenging, earlier mapping attempts were generally limited in how far they would go.
But in the new study, Matthew Glasser and David Van Essen of Washington University Medical School, St. Louis, and their colleagues were able to delve more deeply into this territory and perform some impressive cartography. They did it by taking advantage of the Human Connectome Project (HCP). The HCP, part of the NIH Blueprint for Neuroscience Research, is a research effort that the blog has highlighted previously to map the complex circuitry of the human brain.
As a part of this effort, HCP has already assembled and released exceptionally high-quality magnetic resonance imaging (MRI) data from more than 900 people, capturing multiple properties including four that were put to work in the recent mapping effort. These included physical properties, such as cortical thickness, the connectivity between areas, and the amount of insulation, called myelin, wrapped around the billions of cortical neurons. The researchers also used functional MRI (fMRI) images to characterize brain activity while people listened to stories, figured out mathematical equations, and reacted to facial expressions.
The team gathered data from 210 HCP participants, aged 22 to 35, and used a sophisticated computer algorithm to overlay the data collected from each person and align it as precisely as possible onto their map of the cerebral cortex. Glasser and Van Essen, experts in brain anatomy, then reviewed the data to look for geographical changes in two or more properties, an indication that they might be reaching the border of one area and entering another.
This painstaking analytical effort allowed the researchers to assemble a high-resolution map—kind of a Cerebral Cortex 1.0—representing the brain of a “typical” person. Their map identified 97 new areas in each of the brain’s two hemispheres and confirmed the existence of 83 others that had been described previously. That more than doubles the total of mapped areas in cerebral cortex to 180.
To put this new map to good use in research and ultimately in the clinic, it’s important to confirm that these 180 areas can be found in any person. To develop a tool with this goal in mind, the researchers used a machine learning approach in which a computer was “trained” to recognize each of the brain areas. They then applied their tool to the brain scans of another 210 HCP participants that were not included in the original mapping effort. The team found it could reliably detect nearly all (96.6 percent!) of the 180 areas.
Interestingly, particular areas of the cerebral cortex appear to switch places with one another in some people. The researchers found that even in those atypical brains, they could still correctly identify nearly all of the mapped areas. As the science progresses, it will be fascinating to learn how those fundamental differences in the brain arise and what it might mean for brain function.
While the new map is quite robust, the researchers anticipate future refinements as they and others around the world continue to produce, share, and analyze brain imaging data. Ultimately, this ability to map and identify individual differences in the cerebral cortex and other brain regions should aid in understanding how variation in its features are related to behavior and the development of learning disabilities or disorders, such as schizophrenia and Autism Spectrum Disorder. The ability to identify brain areas non-invasively and automatically in patients presents many exciting possibilities in the clinic. For instance, neurosurgeons could obtain detailed, individualized maps of their patients’ brains to help guide them in the operating room.
With this new map, it’s clear we’ve entered freshly charted territory. I’m looking forward to seeing where the journey leads.
Reference:
A multi-modal parcellation of human cerebral cortex. Glasser MF, Coalson TS, Robinson EC, Hacker CD, Harwell J, Yacoub E, Ugurbil K, Anderson J, Beckmann DF, Jenkinson M Smith SM, Van Essen DC. Nature. July 20, 2016. [Epub ahead of print.]
Links:
Human Connectome Project (Washington University, St. Louis; University of Minnesota, Minneapolis; Oxford University, England Consortium)
NIH Blueprint for Neuroscience Research
Van Essen Lab (Washington University, St. Louis)
NIH Support: National Institute of Mental Health; NIH Blueprint for Neuroscience Research