Zika virus infection emerged as a public health emergency after increasing evidence for its association with neurologic disorders and congenital malformations. In Salvador, Brazil, outbreaks of acute exanthematous illness (AEI) attributed to Zika virus, Guillain-Barré syndrome (GBS), and microcephaly occurred in 2015. We investigated temporal correlations and time lags between these outbreaks to identify a common link between them by using epidemic curves and time series cross-correlations. Number of GBS cases peaked after a lag of 5–9 weeks from the AEI peak. Number of suspected cases of microcephaly peaked after a lag of 30–33 weeks from the AEI peak, which corresponded to time of potential infections of pregnant mothers during the first trimester. These findings support the association of GBS and microcephaly with Zika virus infection and provide evidence for a temporal relationship between timing of arboviral infection of pregnant women during the first trimester and birth outcome.
In late 2014, cases of acute exanthematous illness (AEI), involving widespread rash of unclear etiology, were reported in several municipalities in northeastern Brazil. By April 2015, Zika virus was identified in patients from the states of Bahia (1) and Rio Grande do Norte, Brazil (2). In Salvador, the capital of Bahia, during February–June 2015, ≈15,000 cases of indeterminate AEI were reported (3). Reverse transcription PCR performed on 58 serum samples from AEI outbreak case-patients identified Zika virus in 3 (5.2%) of them. (3). Although chikungunya and dengue viruses were also detected at similar frequencies, the low frequency of fever (35.1%) and arthralgia (26.5%) among AEI patients suggested that Zika virus was the likeliest etiology for the outbreak (3).
The virus has continued to spread, and by the end of 2015, laboratory-confirmed autochthonous Zika virus cases have been identified in all 5 regions of Brazil; the Brazilian Ministry of Health estimated that 500,000−1.5 million persons were infected (4). Zika virus has since spread to other regions of the Americas and resulted in large epidemics (5).
Studies conducted during a Yap Island (Federated States of Micronesia) outbreak found that ≈20% of Zika virus infections showed clinical symptoms (6). For most patients in whom symptoms develop, the disease is self-limited and clinical manifestations (exanthema [rash], arthralgia, fever, and conjunctivitis) are mild (6). However, during the outbreak in French Polynesia, a 20-fold increase in the incidence of GBS was observed (7), and concerns about an association between Zika virus infection and GBS were first raised. A case–control study subsequently identified strong associations of GBS with positive Zika virus seroneutralization and Zika virus IgM or IgG (8). Since 2015, an increase in GBS rates has also been observed in Brazil, Colombia, El Salvador, Suriname, and Venezuela (9).
The increase in newborns with microcephaly in northeastern Brazil in late 2015 called global attention to Zika virus as a major public health threat to pregnant women and their newborns (10). Even without a conclusive association between a prenatal Zika virus infection and neurologic disorders in the offspring, the Brazilian Ministry of Health and World Health Organization declared a public health emergency (11). Since then, clinical evidence increasingly supports an association of prenatal Zika virus infection with birth of babies with microcephaly, and other neurologic and ophthalmologic complications, as well as miscarriages and stillbirths (12–17).
Salvador, the largest city in northeastern Brazil (2015 population of 2.9 million persons) has been one of the main epicenters for epidemics of Zika virus infection, GBS, and microcephaly. Using raw and smoothed temporal data collected during these outbreaks, we investigated the temporal associations and determined the time lags between epidemiologic curves of the suspected Zika virus infection outbreak, reported cases of GBS, and reported suspected cases of microcephaly.

In April 2015, the Centers for Information and Epidemiologic Surveillance of Salvador (CIES) established 10 public emergency health centers as sentinel units for systematic surveillance of patients with AEI of unknown cause in Salvador. A case-patient was defined as a resident of Salvador who had a rash, with or without fever, and whose clinical and epidemiologic characteristics did not satisfy the criteria for dengue, chikungunya, measles, or rubella (18). The public health units searched retrospectively for suspected cases by review of medical charts of patients treated starting on February 15, 2015; continued with prospective case detection; and submitted weekly reports of identified cases to CIES. On May 25, 2015, because of the sharp decrease in the number of outbreak cases, CIES reduced the number of sentinel health units to the 3 that reported the most cases, although several of the other units continued to report AEI cases voluntarily. For our analyses, we used the reported number of cases for February 15–December 31, 2015.
After neurologic syndrome cases in adults potentially associated with a previous Zika virus infection were first reported in Salvador in late May, CIES initiated surveillance for hospitalizations caused by neurologic manifestations that might be linked to Zika. Cases were identified retrospectively during April–May and followed by prospective case detection. CIES regularly contacted all city hospital epidemiologic services and investigated all suspected case-patients who resided in Salvador. Surveillance personnel, supported by infectious disease physicians and neurologists, ruled out cases for which clinical and laboratory manifestations indicated other diagnoses, and only included cases of GBS and its variants (e.g., Miller-Fisher syndrome). For our analyses, we used the number of hospitalized patients with GBS or GBS variants identified in Salvador during 2015.
After the increase in number of cases of microcephaly in newborns first noticed in Pernambuco State in September 2015, and the request from the Brazilian Ministry of Health that all suspected cases of microcephaly in newborns be reported, CIES established a reporting system in October 2015. Since then, CIES has requested and received reports of all newborns with suspected neurologic impairments and has been investigating all potential cases of microcephaly.
Suspected cases of microcephaly in newborns were reported on the basis of a reduced occiptofrontal perimeter at birth. The initial criteria for reporting was newborns delivered after >37 gestational weeks with an occiptofrontal perimeter <33 cm, or newborns delivered before 37 gestational weeks with a perimeter less than the third percentile of the Fenton curve (19). In December, 2015, the Brazilian Ministry of Health changed the first criterion to an occiptofrontal perimeter <32 cm (20).
For our analyses, we only included suspected microcephaly case-patients that fulfilled these latest criteria. The first such case-patient was born on July 11, 2015, and a search of the national information system on live births from Salvador for the AEI outbreak period produced no additional cases of congenital malformation fulfilling these criteria. We included all of suspected cases of microcephaly up to March 10, 2016 (the 10th epidemiologic week of 2016); and data for the last case-patient was updated on March 17, 2016.
We opted to analyze all reported suspected cases of microcephaly, instead of only those investigated and confirmed, because only 27.7% of the reported cases had been investigated. Limiting analysis to only confirmed cases could potentially introduce bias because cases that were reported earlier during the outbreak were more likely to have had the investigation concluded. In contrast, including all reported cases might introduce some false-positive diagnoses. Because both inclusion criteria are not free of a potential bias, we analyzed all reported suspected cases of microcephaly.
CIES served as the repository of all AEI, GBS, and suspected microcephaly data from all contributing sources. CIES evaluated and integrated data, including merging of different reporting spreadsheets, and removed duplicate information (on the basis of name, age, date of reporting, and sanitary districts of residence) and nonsense data (e.g., all missing information). Numbers of cases of AEI, GBS, and suspected microcephaly per epidemiologic week were then tabulated.

We analyzed case-patients with AEI, GBS, and suspected microcephaly by date of medical care, date of hospitalization, and date of birth, respectively. We used the documented date of medical care or hospitalization, rather than the presumed day when symptoms began, to avoid recall error and reduce missing information.
We constructed epidemiologic curves by week and with 3-week and 5-week moving averages by using Stata software (21). We smoothed data by using 3-week and 5-week moving averages to reduce week-to-week variation, wherein the count of events for a given week was averaged with values of the previous and following weeks (3 weeks) or with the 2 previous and 2 following weeks (5 weeks). Because the weekly increase in cases during the outbreak was much larger than the observed weekly variation, there was little difference between crude and smoothed data.
We assessed temporal correlations between our time series by using standard estimation of lagged time-series cross-correlations (22) to identify lag times showing the highest correlations between weekly numbers of AEI and ensuing weekly numbers of 1) GBS cases and 2) suspected cases of microcephaly. Although one could evaluate statistical significance by comparing cross-correlations to those expected under a null hypothesis of no association (22), our primary focus was to estimate lags with the strongest correlation (i.e., at what lags do the strongest correlations occur?), not a strict evaluation of whether any correlations occurred. Because both time series showed single large increases, our goal was to identify time lags between these series. Specifically, we examined lag times of 0–40 weeks and compared the AEI time series to those for GBS and suspected microcephaly to cover the full pregnancy period. Because of observed timing of initial epidemic curves, we present only results for positive time lags (i.e., AEI preceding GBS or suspected microcephaly). We also assessed cross-correlations for raw and 3-week and 5-week smoothed data.

Figure 1. Epidemiologic curves of weekly cases and moving averages of 3 weeks and 5 weeks for A) acute exanthematous illness (AEI), B) Guillain-Barré syndrome, and C) microcephaly, Salvador, Brazil, 2015–2016. The specific...
During the study, CIES recorded 17,503 reported cases of AEI (5.99 cases/1,000 persons during 2015), 51 hospitalizations of persons with of GBS (1.74 cases/100,000 persons during 2015), and 367 newborns with suspected microcephaly (15.6 cases/1,000 newborns during July 2015–February 2016, which peaked at 31.4 cases/1,000 newborns in December) (Table). Raw and smoothed data (3-week and 5-week moving averages) had a clear initiation, peak, and reduction of cases, and followed a classic epidemic time series of incidence for AEI, GBS, and suspected microcephaly (Figure 1).
Number of AEI cases with available data for date of medical care (16,986 [97.1%]) (Figure 1, panel A) peaked during week 18 (May 3–9, 2015), as reported (3). The peak during week 18 was confirmed by 3-week and 5-week moving averages. During weeks 16–20 (April 19–May 23, 2015), >1,000 AEI cases/week were reported.
Number of GBS cases with a known date of hospitalization (49 [96.1%]) (Figure 1, panel B) peaked during weeks 23–27 (June 7–July 11, 2015). Using the 5-week moving average, we found that >4 cases were reported during weeks 23–27. The 5-week and 3-week moving averages provided a clearer picture of the GBS epidemic curve, which was susceptible to higher variability, given the relatively low number of cases per week.
Suspected cases of microcephaly that satisfied our criteria and included a date of birth (357 [97.3%]) (Figure 1, panel C) peaked during weeks 47–49 (November 22–December 12, 2015), during which there were >20 cases/week. Moving averages helped smooth the epidemiologic curve, which is susceptible to uneven time lags between a potential prenatal infection and outcome (i.e., a mother could have been infected at any time during the first trimester or even later). The 18-week period of increase in the number of suspected cases of microcephaly (weeks 31–48) corresponds to a 12-week increase in number of AEI cases (weeks 7–18), and is probably longer because pregnant women throughout the first trimester might have been infected at the onset of the AEI outbreak. For 328 (91.9%) of 357 suspected cases of microcephaly for which data on gestational age at birth were available, the median gestational week was 39 weeks (range 34–41 weeks), which coincided with the first trimester of pregnancy when the AEI outbreak peaked. 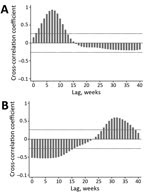 We thank health professionals in Salvador, Brazil, especially those working in surveillance activities, and municipal laboratory staff for providing assistance; Gubio Soares Campos for detecting arboviruses involved in the AEI outbreak; and Isadora Cristina de Siqueira for assisting in identification of Guillain-Barré syndrome.
This study was supported by the National Council for Scientific and Technological Development (grant 400830/2013-2 and scholarships to I.A.D.P., U.K., M.G.R., and G.S.R); the Bahia Foundation for Research Support (scholarship to M.M.O.S.); and the Coordination for the Improvement of Higher Education Personnel–Brazilian Ministry of Education (scholarship to M.K.).