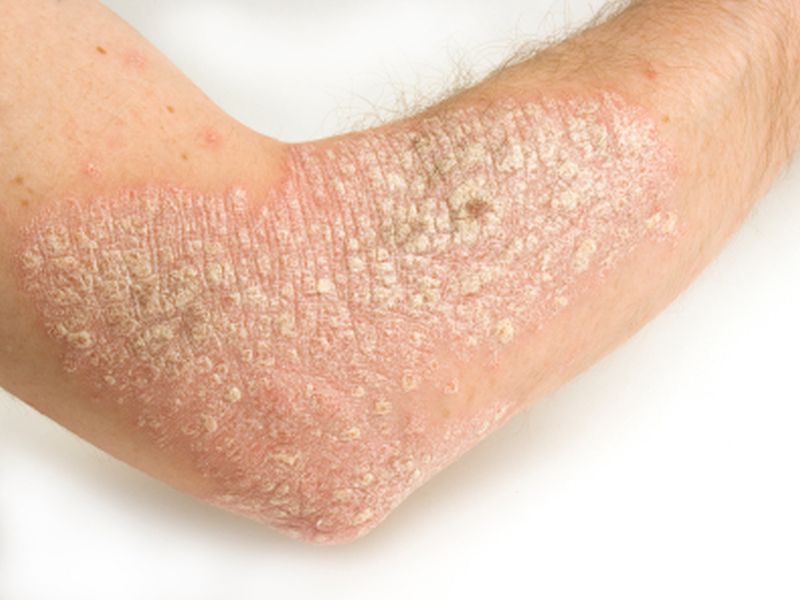 WEDNESDAY, June 8, 2016 (HealthDay News) -- A new drug that has shown "unprecedented" effects on the skin condition psoriasis seems to work well in the longer term, too, researchers report.
The drug, called ixekizumab (Taltz), was approved in March by the U.S. Food and Drug Administration. That came after initial trials showed that over 12 weeks, the drug soundly beat standard medication for moderate-to-severe psoriasis.
The new findings show the benefits are still there after 60 weeks. At that point, about 80 percent of patients were seeing at least a 75 percent improvement in their skin symptoms, the researchers said.
So far, ixekizumab has shown "unprecedented efficacy" against more severe cases of psoriasis, said Dr. Joel Gelfand, a dermatologist who wasn't involved in the research.
The drug, given by injection, targets an inflammatory protein called IL-17, said Gelfand, who directs the Psoriasis and Phototherapy Treatment Center at the University of Pennsylvania.
The FDA approved another IL-17 inhibitor, called Cosentyx, last year.
"Targeting the IL-17 pathway has proven to be yet another revolution in our ability to treat psoriasis," Gelfand said.
That said, he added, researchers need to keep tracking the drugs' long-term effects.
In the United States, between 5 million and 7 million people have psoriasis, according to government statistics. The disease arises from an abnormal immune response that triggers a rapid turnover of skin cells. That causes cells to pile up on the skin's surface.
Most people have what's called "plaque" psoriasis, says the U.S. National Institutes of Health. In that form, people periodically develop thick, scaly patches on the skin that can be itchy or painful.
Some people also suffer painful joint damage and fatigue known as psoriatic arthritis.
Skin treatments or ultraviolet light therapy can be enough to treat the symptoms of milder psoriasis. For more severe psoriasis, doctors often prescribe drugs that suppress the immune system -- including injection drugs called "biologics."
Older biologics include brands like Enbrel and Remicade, which target an immune system chemical called TNF. The new IL-17 blockers are also considered biologics, but their action appears more specific to psoriasis, said Dr. Kenneth Gordon, the lead researcher on the new study.
While the new drugs zero in on IL-17, the anti-TNF drugs seem to eventually get there, said Gordon, a professor of dermatology at Northwestern University Feinberg School of Medicine in Chicago.
The hope is that the IL-17 blockers, with their less-extensive immune effects, will also be safer, Gordon said. TNF-blockers carry a risk of sometimes-serious infections.
IL-17 blockers also dampen a portion of the immune response, so infections are still a concern. So far, Gordon said, colds and fungal infections have been the main side effect, which is "encouraging," he noted.
However, Gordon added, there's always the chance that more serious infections could be a problem with longer use or in vulnerable patients.
A small number of patients also developed inflammatory bowel disease, according to the report.
The findings, published online June 8 in the New England Journal of Medicine, are based on almost 4,000 patients who took part in three trials. In one trial, ixekizumab was tested against a placebo; in the other two, it was pitted against a placebo and Enbrel for the first 12 weeks, and then just the placebo from then on.
After the initial 12-week period, patients took the drug either once a month or every 12 weeks.
After 60 weeks, almost three-quarters of patients in the once-a-month group had only "minimal" psoriasis, based on doctors' ratings. That compared with 7 percent of placebo patients.
About four out of five patients who took the drug monthly had at least a 75 percent improvement in their skin symptoms, the researchers said.
In the initial 12-week study, ixekizumab also beat Enbrel by a significant margin, the study authors said.
Gordon said IL-17 blockers are "taking (medication) responses to a whole new level. We haven't seen rates like these before."
That does not mean the new drugs are for everyone, Gordon stressed. "If you're doing well on your current medication, there's no reason to switch," he said.
Taltz is marketed by Eli Lilly, which funded the study. The recommended dose is one injection every couple of weeks for the first three months, and then every four weeks thereafter, according to the company.
In general, biologics are very expensive, costing up to several thousand dollars per injection. Gordon acknowledged that patients could face hurdles in getting insurance coverage.
"The insurance aspect is always difficult with a new medication," he said.
SOURCES: Kenneth Gordon, M.D., professor, dermatology, Northwestern University Feinberg School of Medicine, Chicago; Joel Gelfand, M.D., director, Psoriasis and Phototherapy Treatment Center, University of Pennsylvania Perelman School of Medicine, Philadelphia; June 8, 2016, New England Journal of Medicine, online
HealthDay
Copyright (c) 2016 HealthDay. All rights reserved.
News stories are provided by HealthDay and do not reflect the views of MedlinePlus, the National Library of Medicine, the National Institutes of Health, the U.S. Department of Health and Human Services, or federal policy.