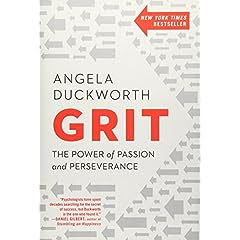 Grit is a disarmingly good book. Given the rows of books on the new science of success, expertise, achievement, and self-actualisation, I was in two minds when I first heard of it, but I have been very pleasantly surprised.

This is the author’s first book but serious credentials underpin it. Angela Duckworth is professor of psychology at University of Pennsylvania, a MacArthur Fellow, and has even advised (arguably insufficiently) Barack Obama. The book is highly accessible, sound in practice, and eminently applicable. Duckworth translates into everyday practice crucial lessons about character. The discussion is informed by a goldmine of references to recent studies.

The key to the book lies in the subtitle: the Power of Passion and Perseverance. She fixes her attention on the two key habits she says constitute “grit”: the capacities to focus passionately on a chosen goal along with the determination to overcome setbacks to achieve that goal.

Passion equates to close attention to the goal and has much in common with prudence. Don’t be fooled by the prudish name. Prudence is the habit we all need of seeking out the truth of things, living in reality, distinguishing right from wrong, and setting goals accordingly. Perseverance equates to fortitude, sustained commitment over time. Duckworth warns against precocious talent that does not apply itself, and does not struggle patiently to improve. She writes of the value of making commitments and honouring those commitments. A UK study of 2000 twins showed that the heritability of fortitude is 37 percent, and of the capacity to focus passionately some 20 percent. In other words, these qualities are highly acquired by parental training and by our own efforts.

She develops a fourfold recipe for grit: interest, practice, purpose and hope. Let us become fascinated by the things we want to be good at. Practice is not good enough; make it deliberate practice – 10,000 hours for mastery. Develop the conviction that this task matters. And foster a growth mindset, that I can do better.

There are lessons for every coach and educator and for anyone aiming higher in their day-to-day life. Don’t be fixated on whether you are good at something, attend to your effort. Be selective about the goals you strive for. Discard distractors. Keep the goal in view. Move from extrinsic motivation to a love of what you are doing. Love your goals and carry them out for others: “In my lexicon.” Duckworth writes, “purpose means the intention to contribute to the wellbeing of others”. Don’t give in to obstacles. Practice optimistic self-talk. Find a gritty culture and join it.

There is a valuable chapter on “parenting for grit”. Model passion and perseverance for your life goals; it’s the old adage “Children love what their parents love”. Early exposure to the right activities can foster a life-long love for those activities. Praise children for their effort, not for their talent. Create routines; she quotes William James: “There is no more miserable human being (than the one for whom) the beginning of very bit of work must be decided anew each day.”

Seek out structured extra curricular and insist on commitment over whim – this can be “transformative”. If your child learns an instrument require them to stick at it for at least a year, two even better. And importantly, move children from extrinsic motivation to a love of what they are doing. Seek out an “ecosystem” of adults who can reinforce the message; mentors and teachers make a difference.

Her writing offers simple but powerful lessons. For example, to make the point that hard work alone is insufficient, Duckworth illustrates with three types of bricklayers: those who just see the job – “I lay bricks as a job”; those who see a career focused on an end result – “I am building a church”; and those who see their work as acalling in which their work is central to their life in importance – “My work is building a house to honour God”. Real life anecdotes abound. Duckworth writes of a toddler who seemed totally resistant to potty training, but on the first day at preschool lined up with all the other three year olds to use the potty. Expectations can determine game-changing performance.

The greatest weakness of the book is her understanding of how virtues work together to support sound behaviours and build up character. Crucially she understands virtue as habit, and her approach is descriptive and intuitively objective.

But there is little evidence of an underpinning anthropology. Her taxonomy of virtue, adopted from Daeun Park, places grit, along with self control and self management in the cluster of intrapersonal virtues. She contrasts these qualities with the social virtues such as generosity and helping others. She identifies a third cluster which she nominates as intellectual virtues. These seem to work in parallel, but not synthetically.

Thomas Aquinas, predicting both the observational and neuroscientific evidence, argued that every act of virtuous behaviour requires the contribution of all four cardinal virtues. These four virtues are not arbitrary qualities of character even though, too often, that is what they are reduced to. Rather they are facilities to manage our emotions so we can make wise love-choices. He said that in each action we need temperance and fortitude to direct our desires and manage our fears so that we can think clearly. Our reasoning then is open to facilitation by habits of prudence and justice: sound habits of living in reality, making realistic plans, and crucially, of suffusing all our actions with a deep respect for others and sense of responsibility. Think about it. In each decision we make, all four virtues are necessarily present.

This is a significant flaw. Angela Duckworth insists that we need the full range of qualities of character but the integration in every action is lacking, and surely, if such integration is lacking then there can be actions which remain complacently self-centred and yet still contribute to our flourishing. I question this.

She writes, “Morality trumps all other aspects of character in importance. Sure, we take notice if our neighbours seem lazy, but we are especially offended if they seem to lack qualities like honesty, integrity and trustworthiness. So, grit isn’t everything, there are many other things a person needs in order to grow and flourish.” This is intuitively true, but our society has so ingrained the right to self-centredness that we need urgently to rediscover a broader role for justice as loving respect and a deep responsibility to our fellow man, writing it into every action. It is pity that Angela Duckworth is unacquainted with the decisive contribution of Aquinas.

Importantly she does contrast hedonic intention, intent on sense pleasure, and Aristotelian eudaimonic flourishing that seeks the deepest good of one’s nature , and she does insist that true grit appears to be accompanied by a deep desire to serve, and put one’s talents at the service of others.

Duckworth writes, “To some extent, we’re all hardwired to pursue both hedonic and eudaimonic happiness. But the relative weight we give these two kinds of pursuits can vary. Some of us care about purpose much more than we care about pleasure, and vice versa.” Essentially she is saying that our choices can give priority to eudaimonic flourishing; yet that need not be, in real life, an either/or dilemma. That would be simplistic. No doubt a person can totally and self centredly pursue professional goals for the tangible rewards they deliver, but it is also possible for us to love the nitty gritty of what we do and also do all of it with a deep sense of service. Aristotle insisted that moral education lies precisely in having refined attitudes to pleasure… finding pleasure in the right activities.

In summary, Grit sits one shelf below Aristotle’s Nicomachean Ethics, Pieper’s The Cardinal Virtues, Isaac’s Character Building, Covey’s Seven Habits, Seligman and Peterson’s Character Strengths and Virtues, and Lickona’s Character Matters, all classics of virtue development. Nevertheless, I do believe that Aquinas would put Duckworth on his bedside table.

Ultimately Angela Duckworth’s Grit: the Power of Passion and Perseverance is a powerful reminder that character results from choices. We have the capacity to take the path of our lives into our own hands. And the path of your child’s life depends so much on your example, the early lessons and training you offer, the abundance of affection and high expectations, and the peer group and mentors with whom you surround them. How are you raising your child?

One of the truly heroic figures of bioethics is Jerome Lejeune, the French geneticist who identified the genetic cause of Down syndrome. He was firmly convinced that from the moment of conception the embryo is a human being and should be protected. His insistence upon this point may have cost him the Nobel Prize. In today's lead article Mary Le Rumeur reviews a new film about the life of his remarkable man.