blog.aids.gov − An AIDS-free world is possible, but do we have the will to achieve it?

blog.aids.gov − An AIDS-free world is possible, but do we have the will to achieve it? 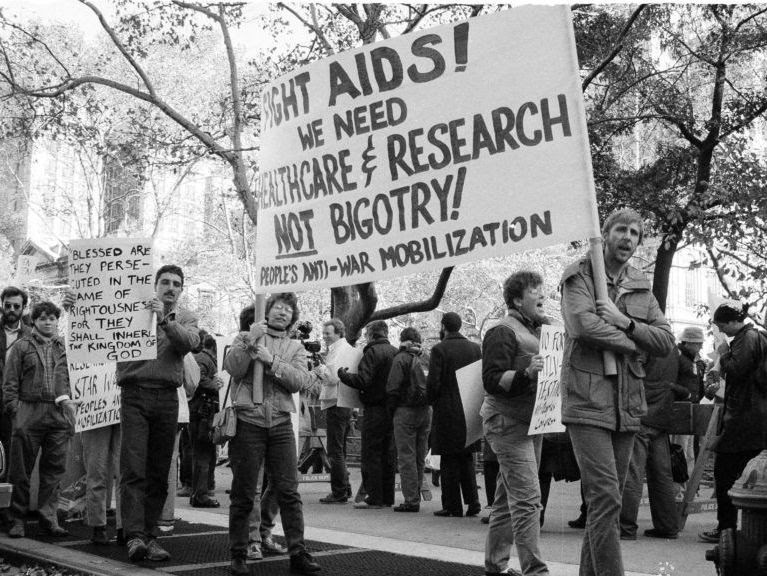 AN AIDS-FREE WORLD IS POSSIBLE, BUT DO WE HAVE THE WILL TO ACHIEVE IT?

About 100 demonstrators protested on the steps of New York’s City Hall on Friday, Nov. 15, 1985 as a City Council committee considered legislation to bar pupils and teachers with the AIDS virus from public schools. (AP Photo/Rick Maiman)
Thirty-five years ago this week, our lives — and the lives of millions of people around the globe — changed forever with the publication of a report of five previously healthy gay men in Los Angeles diagnosed with Pneumocystis carinii pneumonia, a disease typically seen only in those with profoundly impaired immune function.
As two physicians — one immersed in his career as a physician-scientist in infectious diseases and immunology at the National Institutes of Health, the other just starting her career as a fellow in internal medicine and immunology at the Walter Reed Army Medical Center — we encountered the earliest days of what eventually would become the HIV/AIDS pandemic.
We were trained to be healers, but during those early days of the HIV/AIDS pandemic, we experienced the heartbreaking frustration of trying to help patients infected with the human immunodeficiency virus whom we could not heal. With time, however, came the incremental and ultimately transforming scientific advances that moved an HIV diagnosis from an almost inevitable death sentence to a chronic, often manageable disease. In the 1980s, a person infected with HIV often lived less than a year after it progressed to AIDS. Today, combination antiretroviral therapy offers individuals with HIV nearly normal lifespans if they start treatment early and are able to adhere to their therapy
Buoyed by this stunning evolution, in September 2015, 193 United Nations member nations agreed to a bold idea that was once unimaginable — ending the AIDS epidemic by 2030. This week, these member nations are once again coming together at the 2016 United Nations High-Level Meeting on Ending AIDS to chart a fast-track toward reaching this goal.
The science is clear: Every individual infected with HIV should be offered antiretroviral drugs as soon as the diagnosis is made — this approach is now recommended by the World Health Organization for every country around the world. This can prolong life and prevent further transmission of the virus. Last year, NIH-funded research provided strong evidence of the advantage of beginning treatment soon after diagnosis rather than waiting until immune system damage occurs. Clinical trials have also demonstrated

that HIV treatment benefits not only the infected individual, but also his or her sexual partners, as lowering the level of virus in the body reduces the risk of transmitting it to others.
Together, HIV treatment and other proven prevention interventions provide a powerful toolbox for ending the HIV/AIDS pandemic. These tools include voluntary medical male circumcision, which can reduce the risk of female-to-male HIV transmission by at least 60 percent; pre-exposure prophylaxis, or PrEP, a single daily pill containing two antiHIV drugs that can reduce by 90 percent the risk that an uninfected individual will contract HIV; the use of condoms

; and innovative, multidimensional approaches to decrease the risk of HIV infection in young women, such as the DREAMS Partnership, led by the President’s Emergency Plan for AIDS Relief (PEPFAR).
In recent years, PEPFAR; the Global Fund to Fight AIDS, Tuberculosis and Malaria

; the Joint United Nations Programme on HIV/AIDS [exxternal_disclaimer]; and other global initiatives have worked in partnership with countries to successfully translate these strategies into action. Globally, AIDS-related deaths have dropped by 45 percent since their peak in 2004. Yet the rate of HIV transmission remains unacceptably high, with 2.1 million new infections occurring worldwide in 2015 alone.
If the tools we already have for HIV treatment and prevention were widely implemented, and all HIV-infected individuals were identified and placed in continuous, effective preventive and medical care, more than 90 percent of new HIV infections worldwide could be prevented each year. That is what we need to end AIDS by 2030.
It will be challenging to reach this global target, even in the wealthiest countries. Outside of the clinic, HIV intersects with economics, gender, race, and other complex dynamics woven into the fabric of our communities. While some diseases are equal-opportunity killers, afflicting the rich and the poor alike, HIV tends to exact its heaviest toll on vulnerable populations and those with scarce resources, in the United States and around the world.
Globally, 390,000 young women were newly infected with HIV in 2015 — more than 1,000 every day. In sub-Saharan Africa, girls account for three-quarters of new HIV infections among adolescents in the region. There, the path of HIV transmission for young women and, in turn, their male partners, is often sadly predictable. Men in their mid-to-late 20s commonly develop sexual relationships with adolescent girls, who benefit from the economic largesse of their older male partners. These HIV-infected men often transmit the virus to adolescent girls, who may remain unaware of their infection for years. They may then infect their other sexual partners, continuing the cycle.
In the United States, black men who have sex with men are at greatest risk for HIV infection. In fact, if the rates of current HIV diagnoses persist, about 1 in 2 black men

who have sex with men in the US will be diagnosed with HIV during their lifetimes. These men, who face the greatest risk of HIV infection, also must frequently confront racism and homophobia. Racial and sexual discrimination and the stigma against people living with HIV contribute to poorer health outcomes, often driven by reduced economic opportunities, a lack of access to health care, and a limited ability to use HIV prevention and treatment services.
We have come a long way since we first confronted AIDS in 1981. Science has createdeffective tools

that have saved millions of lives. However, we need to apply these tools with intelligence and alacrity to end the epidemic. We must ensure that HIV services reach the most vulnerable populations. Everyone — from governments and communities to philanthropists and the private sector — must play a part. We have the extraordinary opportunity to usher in the first AIDS-free generation in more than 35 years. The only question is: Do we have the will to do it?
Dr. Fauci is director of the National Institute of Allergy and Infectious Diseases, National Institutes of Health; Dr. Birx is ambassador-at-large and coordinator of the United States Government Activities to Combat HIV/AIDS and US special representative for Global Health Diplomacy, Department of State.
Anthony S. Fauci can be reached at first.opinion@statnews.com

Deborah L. Birx can be reached at first.opinion@statnews.com