Caption: PET scan images show distribution of tau (top panel) and beta-amyloid (bottom panel) across a brain with early Alzheimer’s disease. Red indicates highest levels of protein binding, dark blue the lowest, yellows and oranges indicate moderate binding.
Credit: Brier et al., Sci Transl Med
In people with Alzheimer’s disease, changes in the brain begin many years before the first sign of memory problems. Those changes include the gradual accumulation of beta-amyloid peptides and tau proteins, which form plaques and tangles that are considered hallmarks of the disease. While amyloid plaques have received much attention as an early indicator of disease, until very recently there hadn’t been any way during life to measure the buildup of tau protein in the brain. As a result, much less is known about the timing and distribution of tau tangles and its relationship to memory loss.
Now, in a study published in Science Translational Medicine, an NIH-supported research team has produced some of the first maps showing where tau proteins build up in the brains of people with early Alzheimer’s disease [1]. The new findings suggest that while beta-amyloid remains a reliable early sign of Alzheimer’s disease, tau may be a more informative predictor of a person’s cognitive decline and potential response to treatment.
The study, led by Beau Ances and Matthew Brier of Washington University, St. Louis, set out to explore how the accumulation of tau and beta-amyloid, though linked to different pathological processes, are related clinically in tracking the progression of Alzheimer’s disease. To take a look, they imaged beta-amyloid and used a newly available imaging agent for tau that, when injected into a person’s bloodstream, binds to the protein and makes it visible in positron imaging tomography (PET) scans of the brain.
The researchers studied 46 people—36 healthy controls and 10 people diagnosed with mild Alzheimer’s disease. The participants, who averaged 75 years old, underwent an MRI and two PET scans to visualize the distribution of both tau and beta-amyloid across the brain. All participants also completed standard memory tests for dementia. In addition, most study participants had their tau and beta-amyloid levels measured in cerebrospinal fluid and underwent neuropsychological testing. 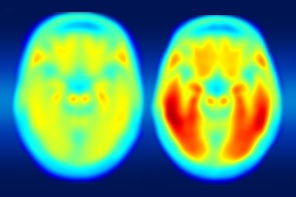 Caption: Composite PET scan image, with the increasing intensity of red indicating more tau protein. Left, the average tau accumulation in people who are cognitively normal; right, the average amount of tau in multiple people with mild symptoms of Alzheimer’s disease.
Credit: Matthew R. Brier, Washington University, St. Louis
The brain scans revealed markedly increased tau levels in the brains of people with early Alzheimer’s disease compared to healthy participants. Those differences were particularly notable in the temporal lobe, a portion of the brain known to play a role in memory, and in the cerebral cortex. The researchers also observed increases in beta-amyloid in people with Alzheimer’s disease as well as in some of the cognitively normal study participants. Those amyloid plaques tended to build up most prominently in the brain’s frontal and parietal lobes, key areas involved in integrating sensory information and higher cognitive processes, including memory and executive function.
Although beta-amyloid and tau tend to concentrate in different parts of the brain, the researchers found that tau accumulation in the temporal lobe tracked closely with symptoms of memory loss, as measured on standard pencil and paper tests of cognitive ability. The beta-amyloid scans, however, didn’t show the same ability to predict a person’s cognitive performance.
While measures of overall tau burden based on the PET scans closely mirrored those obtained from analyses of cerebrospinal fluid, the images offer much more information about where tau tends to accumulate as a person’s memory begins to worsen. While additional research is needed in more people over time, Ances and his colleagues now suspect that beta-amyloid accumulates diffusely throughout the brain first. Their data also suggest memory troubles surface only later, once the presence of both amyloid and tau deposits within certain brain regions cause a person to show symptoms of the disease.
Amyloid imaging has great promise for use in the early diagnosis of Alzheimer’s disease. But, in many cases, people don’t see their doctor with concerns about Alzheimer’s until memory problems have already begun, and it appears that tau might provide a useful tool for staging their disease. As progress is made in the development of new Alzheimer’s treatments, including those that targettau and beta-amyloid, PET scans might prove useful for doctors in choosing the therapy most likely to help a patient and monitor its effects on disease progression.
Meanwhile, NIH-supported research is specifically funding PET scans of tau in clinical trials. A prime example is the Accelerating Medicines Partnership-Alzheimer’s Disease (AMP-AD) Biomarkers Project, overseen by NIH’s National Institute on Aging. This consortium of three clinical trials, which is testing anti-amyloid therapies to help prevent or delay Alzheimer’s disease, has already incorporated tau imaging.
This progress in imaging tau and predicting cognitive decline may be helpful for the approximately 5 million Americans already affected by Alzheimer’s disease [2,3]. But more than that, this advance will provide researchers with a critical tool to test an array of new preventive therapies, the development of which is an extremely high priority.
References:
[1] Tau and Aβ imaging, CSF measures, and cognition in Alzheimer’s disease. Brier MR, Gordon B, Friedrichsen K, McCarthy J, Stern A, Christensen J, Owen C, Aldea P, Su Y, Hassenstab J, Cairns NJ, Holtzman DM, Fagan AM, Morris JC, Benzinger TL, Ances BM. Sci Transl Med. 2016 May 11;8(338):338ra66.
[2] Alzheimer disease in the United States (2010–2050) estimated using the 2010 census. Hebert LE, Weuve J, Scherr PA, Evans DL.Neurology. 2013 May 7;80:1778-1783.
[3] Alzheimer’s Disease. Centers for Disease Control and Prevention. 2016 March 5.
Links:
Alzheimer’s Disease Fact Sheet (National Institute on Aging/NIH)
Beau Ances (Washington University School of Medicine, St. Louis)
Accelerating Medicines Partnership (NIH)
NIH Support: National Institute on Aging; National Institute of Neurological Disorders and Stroke; National Center for Advancing Translational Sciences