But tolerance still varies between teens and 40-somethings 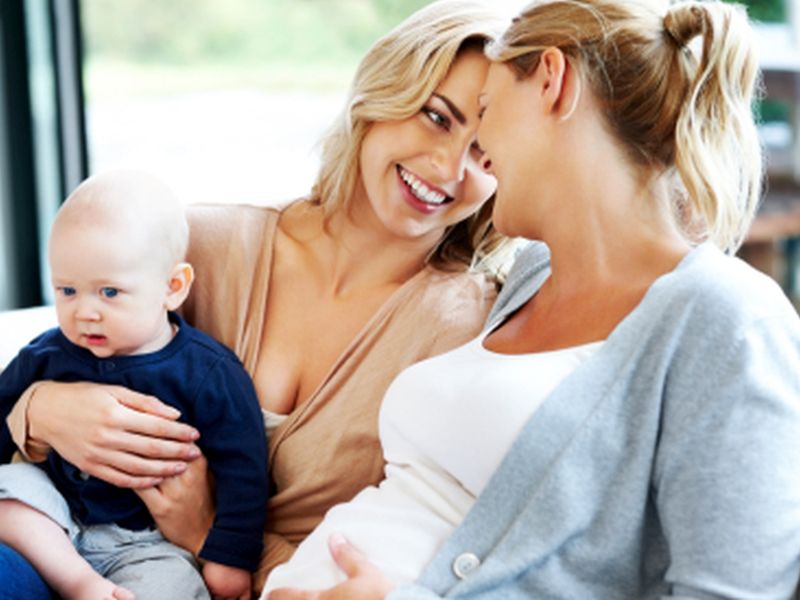 THURSDAY, March 17, 2016 (HealthDay News) -- Young Americans increasingly favor adoption rights for gays and lesbians, with three-quarters of females and two-thirds of males now voicing support, according to a new government report.
These statistics from the U.S. National Center for Health Statistics reflect a steady rise from 2002, and a significant shift in attitudes across the nation among people 15 to 44 years old.
The report doesn't explore the reasons for this change. But one gay dad who studies sexuality believes familiarity with gays and lesbians has fostered growing acceptance of gay families.
"We have more visibility, and more people see us as individuals who live nearby, which contributes to more favorable attitudes," said Sean Massey, an associate professor of women, gender & sexuality studies at Binghamton University in New York. Massey and his husband adopted a son, now 13, in 2002.
The report, released March 17, is based on ongoing surveys about U.S. attitudes regarding marriage, childbearing and sex. About 45,000 people aged 15 to 44 were questioned in 2002, 2006-2010 and 2011-2013.
Based on this study, it's impossible to say whether pop culture mainstays like TV's "Modern Family" are molding -- or reflecting -- changing views.
But in the big picture, the findings "fit into broader societal trends of greater acceptance of LGBT (lesbian, gay, bisexual, and transgender) lives," said Rachel Farr, an assistant professor of psychology at the University of Kentucky.
"Visibility of lesbian and gay parents is increasing, and it is likely that more people's lives have somehow been touched by this issue of lesbian and gay adoption in positive ways," said Farr, who wasn't involved in the study.
Indeed, research has shown that people are more positive about same-sex marriage and adoptions by gay people when they know gay people personally, are friends with them, or have talked with them about what life is like in society as a gay person, said Robert-Jay Green. He founded the Rockway Institute for Research in LGBT Psychology and is professor emeritus of clinical psychology at California School of Professional Psychology at Alliant International University.
While the new numbers reflect growing support for gay and lesbian adoption rights, there's a twist. People in their late 30s and early 40s are significantly less tolerant than those in their teens, 20s and early 30s.
Overall, 68 percent of men and 75 percent of women in 2011-2013 agreed that gay or lesbian adults should have the right to adopt children, the researchers said.
But only about two-thirds of women aged 35 to 44 voiced support versus 83 percent of 15- to 24-year-olds. Similarly, three-quarters of younger males were in favor compared to six out of 10 in the older age group, the findings showed.
In another complication, Massey said it's possible that those who support gay adoption are not entirely tolerant of gays and lesbians.
For example, slightly less than half the men surveyed and about 60 percent of women said they approve of sexual relationships between same-sex adults. These percentages are higher than they were a decade ago, the survey found. Yet these numbers are still far lower than the numbers who support adoption by gays and lesbians.
Attitudes about other people can be "complex and sometimes contradictory," Massey said. For example, he said, someone may say they support gay adoption but be especially judgmental when they see a family with gay parents "when we aren't at our best."
Research suggests that kids of gay parents fare as well as other children, however. "After decades of study, researchers have found no evidence that parents' sexual orientation affects their child's well-being, academic achievement or relationship skills," said Rachel Riskind. She is an assistant professor of psychology at Guilford College in Greensboro, N.C.
Some kids may face challenges outside of the home, however. "Many kids with lesbian or gay parents experience bias or discrimination against their families, just like other kids who are members of marginalized groups, but it doesn't generally have a lasting impact on their well-being," Riskind said.
The report, by Jill Daugherty and Casey Copen of the vital statistics division of the U.S. Centers for Disease Control and Prevention's National Center for Health Statistics, is published in the National Health Statistics Reports.
SOURCES: Rachel Farr, Ph.D., assistant professor, psychology, University of Kentucky, Lexington; Sean Massey, Ph.D., associate professor, women, gender and sexuality studies, Binghamton University, N.Y.; Robert-Jay Green, Ph.D., founder and senior research fellow, Rockway Institute for Research in LGBT Psychology, and professor emeritus, clinical psychology, California School of Professional Psychology at Alliant International University, San Francisco; Rachel Riskind, Ph.D., assistant professor, psychology, Guilford College, Greensboro, N.C.; March 17, 2016, National Health Statistics Reports, U.S. Centers for Disease Control and Prevention's National Center for Health Statistics
HealthDay
Copyright (c) 2016 HealthDay. All rights reserved.