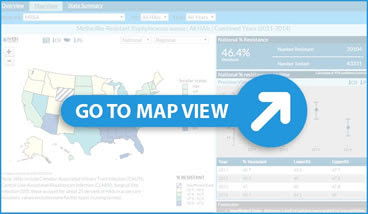 You can customize maps and tables to show antibiotic resistance patterns in HAIs by filtering the data by geographical area (national, regional, and state), time period, event type, and patient age.

The data is from 4,403 facilities that reported at least one HAI to NHSN, including:
Due to insufficient data, long-term care and skilled nursing facilities are not included at this time.

The data shown in the AR Atlas were gathered after one of three key types of infections occurred in the hospital:
**At the national level, SSI data reflect all types of SSIs (superficial, deep, and organ/space) that occurred following any of the 39 NHSN inpatient procedures and were performed between 2011-2014.

The AR Atlas includes resistance data for 31 bug-drug profiles (or phenotypes, pathogen-antibiotic combinations that are used to describe the bacteria’s resistance to a specific drug(s)). These phenotypes include:
For a full list of pathogen-drug combinations, read the Phenotype Definitions document[PDF - 180 KB].
*To read how the data were gathered and limitations of the data, please read the Methodology document[PDF - 123 KB]. The AR Atlas data help inform, but do not replace, national estimates of cases of infection in the U.S. reported by CDC in the Antibiotic Resistance Threats in the United States, 2013 (AR Threat Report). The AR Threat Report published in 2013 used NHSN data from 2010-2012 in combination with other national surveillance and prevalence survey data to extrapolate estimates. CDC will perform such extrapolations periodically to update the AR Threat Report, which will remain a separate initiative from this Atlas.