Next-generation sequencing has identified novel astroviruses for which a pathogenic role is not clearly defined. We identified astrovirus MLB2 infection in an immunocompetent case-patient and an immunocompromised patient who experienced diverse clinical manifestations, notably, meningitis and disseminated infection. The initial case-patient was identified by next-generation sequencing, which revealed full-length genome sequences of astrovirus MLB2 in cerebrospinal fluid, plasma, urine, and anal swab specimens. We then used specific real-time reverse transcription PCR to screen 943 fecal and 424 cerebrospinal fluid samples from hospitalized patients and identified a second case of meningitis, with positive results for the agent in the patient’s feces and plasma. This screening revealed 5 additional positive fecal samples: 1 from an infant with acute diarrhea and 4 from children who had received transplants. Our findings demonstrate that astrovirus MLB2, which is highly prevalent in feces, can disseminate outside the digestive tract and is an unrecognized cause of central nervous system infection.
Astroviruses, family Astroviridae, are small, nonenveloped, single-stranded RNA viruses. The family comprises 2 genera: Mamastrovirus species infect mammals, including humans, and Avastrovirus species infect poultry and other birds. Human astroviruses (HAstVs) were first identified in 1975 (1); until recently, only classic HAstVs that belonged to the species Mamastrovirus (MAstV) 1 were recognized as human pathogens. HAstVs contribute to ≈10% of nonbacterial, sporadic gastroenteritis in children, with the highest prevalence observed in community healthcare centers (2,3). Symptoms are generally mild, with patient hospitalization usually not required; asymptomatic carriage has been described in 2% of children (4).
Screening of fecal samples from persons with diarrhea and control samples in different parts of the world by unbiased next-generation sequencing (NGS) or reverse transcription PCR (RT-PCR) has revealed the sporadic presence of members of the Astroviridae family, previously unrecognized in humans, that are phylogenetically substantially distant from classic HAstVs (3,5–9). These viruses have been named HAstV-VA/HMO and HAstV-MLB, for Virginia, human-mink-ovine, and Melbourne, respectively, according to the place where they were first identified and their close phylogenetic distance to animal astroviruses; these viruses belong to distinct species (10).
Cellular receptors and targeted cells for these viruses are unknown and, to date, novel astroviruses have not been culturable. Although the primary site of astroviral replication seems to be the gastrointestinal tract, disseminated diseases and encephalitis have been associated with infection with classic and nonclassic astroviruses (11–16). In animals, astroviruses also have the potential to target other organs; hepatitis and nephritis have been observed in avian infections (4,17).
These observations point to the noteworthy genetic diversity of astroviruses and their probable cross-species transmission. Nonetheless, clinical disease associated with new astrovirus variants remains to be confirmed (9,18). Although HAstV-MLB has been recovered from fecal samples of patients with acute flaccid paralysis (6), to our knowledge, no reports have documented this variant in cerebrospinal fluid (CSF) or central nervous system (CNS) tissue samples.
In June 2013, we launched a single-center prospective study using NGS to determine potential viral etiologic agents of meningoencephalitic and respiratory syndromes. Yet, in ≈50% of meningoencephalitis cases clinically suspected to be of viral origin, origins remain undetermined, despite comprehensive microbiologic investigations (19,20). We report the detection, in the context of this project, of an astrovirus MLB2 in the CSF of an immunocompetent adult patient with acute meningitis who was hospitalized at the University of Geneva Hospitals, Geneva, Switzerland, and the results of the pilot prevalence study and clinical investigation that this discovery triggered.

The virus discovery study and the pilot retrospective prevalence study it generated were approved by the University of Geneva Hospitals (CCER no. 13-075), and informed consent was obtained from the case-patient. This single-center epidemiologic study is ongoing (Technical Appendix 1[PDF - 378 KB - 14 pages]).

To estimate the local prevalence of this novel astrovirus, we tested some CSF specimens, including all of those with a total leukocyte count of >5 cells/μL, collected from April 2013 through April 2015, and all fecal specimens collected from August 2014 through August 2015 with the astrovirus MLB2–specific real-time RT-PCR targeting the capsid gene. Specimens were collected from pediatric and adult patients hospitalized at the University of Geneva Hospitals, a 1,900-bed tertiary-care medical center, and sent to the center’s laboratory of virology for any clinical purpose. All samples had been stored at −80°C. 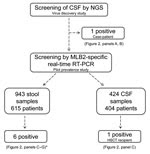 Figure 3. Phylogenetic tree constructed on the basis of full-length sequences of astroviruses and mamastroviruses. The sequence from the case-patient in this study is astrovirus MLB2 Geneva 2014. Brackets indicate the 4 Mamastrovirus...
Phylogenetic analysis was performed on the full-length genome and on capsid sequences (Figure 3; Technical Appendix 2[PDF - 378 KB - 14 pages] Figure, Table 1). Astrovirus MLB2 Geneva 2014 shows 98.5% nucleotide sequence identity homology with the complete genome of an astrovirus MLB2 isolate MLB2/human/Stl/WD0559/2008 detected in a viremic child in St. Louis, Missouri, USA, in 2011 (11).

A total of 943 fecal specimens from 615 unique patients were screened; specimens from 6 patients (1%) were positive for astrovirus MLB2 by the 2 RT-PCR assays, bringing the overall number of positive patients to 7. Except for 1 immunocompetent infant who was brought for treatment with diarrhea of 15 days’ duration, all patients were highly immunocompromised: 1 was an adult recipient of a hematopoietic stem cell transplant (HSCT) (Figure 2, panel C) and 4 were children who received solid organ transplants (Figure 2, panels D–G). Two patients had concomitant viremia (Figure 2, panels C and D), and 1 had 2 astrovirus MLB2–positive fecal samples, collected 2 weeks apart (Figure 2, panel G). Most patients had past or current digestive tract symptoms; the immunocompetent infant with diarrhea had no other digestive pathogen retrieved, and no other explanation was found for his symptoms. One child who had received a transplant experienced concomitant and recurrentClostridium difficile infection, and adenoviral DNA was found in feces.
Among 424 CSF specimens collected from 404 patients hospitalized in the 2 previous years, 1 supplementary specimen was positive for astrovirus MLB2. The patient was the HSCT recipient whose feces had also been screened positive (Figure 2, panel C). Of note, we detected astrovirus MLB2 RNA in CSF from this patient over a 3-month period and intermittently in plasma specimens from this patient over a 2-month period.

The case-patient (Figure 2, panels A, B) had been enrolled in the virus discovery study. In September 2014, this previously healthy 21-year-old woman sought treatment for an unusually severe headache and fever of a few hours’ duration. She lived in a rural area, had 2 housecats, and had recently traveled to Portugal. She worked at a children’s daycare center. Physical examination revealed neck stiffness without focal neurologic deficits. Blood laboratory test results were within reference limits; leukocyte count was 4.2 × 109 cells/L, and C-reactive protein level was 27 nmol/L. Analysis of CSF obtained by lumbar puncture (LP) at admission revealed clear fluid yet an abnormally high leukocyte count of 915 cells/μL (reference range 0–5 cells/μL), with 93% neutrophils; slightly elevated protein (73 mg/dL, reference range 15–45 mg/dL); and a CSF/plasma glucose ratio of 0.53. The patient was admitted and ceftriaxone and acyclovir were administered empirically. Bacterial CSF cultures remained negative, as did viral real-time RT-PCR assays targeting herpes simplex virus, varicella-zoster virus, enteroviruses, parechovirus, and Toscana virus. Serologic testing for HIV, Treponema pallidum (syphilis), tickborne encephalitis virus, and Borrelia burgdorferi (Lyme disease) were negative, as were blood cultures. The patient underwent repeat LP 4 days after admission; the CSF leukocyte count had decreased to 47 cells/μL with a shift toward lymphocytic predominance (92%), whereas protein levels had returned to reference range (21 mg/dL). Real-time PCR results for herpes simplex virus and varicella-zoster virus remained negative on the second CSF analysis, and acyclovir was discontinued. Real-time PCR results for Streptococcus pneumoniae andNeisseria meningitidis was also negative, and ceftriaxone was discontinued after 7 days. The patient continued to improve; she was discharged 10 days after admission with a presumptive diagnosis of viral meningitis.
The second patient (Figure 2, panel C) was a HSCT recipient screened by the pilot prevalence study. He was a 37-year-old man who underwent HSCT on October 2014 for acute myeloid leukemia. His household included young children. In March 2015, he experienced a headache and was ultimately given a diagnosis of a leukemic relapse, including meningeal involvement with a CSF leukocyte count of 2,240 cells/μL and a flow cytometry result confirming that 90% were blast cells. Magnetic resonance imaging showed signs of meningeal leukemic infiltration without cerebral involvement. The patient subsequently received 6 cycles of intrathecal chemotherapy and 4 cycles of 5-azacitidine, which led to remission. LPs on March 25 and June 3 revealed CSF leukocyte counts within normal limits that were nonetheless difficult to interpret given the patient’s marked systemic leukopenia (0.7 and 1.1 × 109cells/L, respectively). At that time, the patient experienced episodes of vertigo, limb weakness, lightheadedness, and recurrent headache, for which follow-up magnetic resonance imaging was performed. Although meningeal infiltration had diminished, it was still detectable. Thus, the patient underwent cranial irradiation beginning in July 2015. The patient then received a diagnosis of a second relapse of leukemia and finally died in December 2015.

We thank the case-patient and her family, the pediatricians, the neurologists, and Juan Ambrosioni for their contribution to the virus discovery study. We are also grateful to Gael Vieille and Patricia Suter-Boquete for technical assistance; Stavroula Masouridi-Levrat, Yves Chalandon, Christian van Delden, Valérie Mc Lin, and Paloma Parvex for clinical collaboration; Caroline Tapparel and Angela Huttner for revising the manuscript; and Rosemary Sudan for editorial assistance. A plasmid that included the target region was kindly provided by David Wang, Washington University School of Medicine, St. Louis, Missouri, USA.
This work was supported by the Swiss National Science Foundation (grant no. 32003B_146993 to L.K.), the University of Geneva Hospitals Clinical Research Center and Faculty of Medicine; and the Louis-Jeantet Foundation.