is the most common cause of inherited colorectal cancer (CRC). LS accounts for about 4,200 new cases of CRC per year (based on 2007 statistics). People with LS have a lifetime colorectal cancer risk of 54-74% in males and 30-52% in females. People with LS are at significantly increased risk for additional cancers, including second primary colon cancer and endometrial cancer in women (40-60%). For each case of LS identified, about half of the person’s first-degree relatives (parents, siblings and children) will also be at increased risk of cancer due to LS and could benefit from enhanced CRC surveillance. Screening colonoscopy at 1-3 year intervals among people with LS can reduce the incidence of CRC by about 60%. The relatives who do not have LS could benefit from knowing that they are not at increased risk as compared to the general population. LS may affect as many as 800,000 people in the U.S., and an estimated 98% of these people may be undiagnosed

that genetic testing for LS be offered to all persons with newly diagnosed CRC to benefit their at-risk relatives identified through cascade screening. Several different genetic testing strategies are available for Lynch syndrome, including screening of cancer tissue and/or diagnostic testing of DNA from normal tissue. Implementation of this recommendation is a unique opportunity to prevent CRC, through increased surveillance where indicated, in thousands of people. Furthermore, an analysis conducted in 2009

found that this cascading approach is cost effective - being at least comparable with other preventive services. 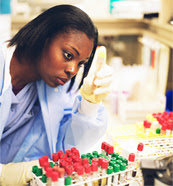 Context: At the time that the EGAPP recommendation was issued, there were no evidence-based recommendations for universal screening for LS among newly diagnosed colorectal cancer cases. The NCCN LS screening guidelines

use the revised Bethesda/Amsterdam criteria, although the current version acknowledges the EGAPP recommendation, noting that an infrastructure needs to be in place to handle the screening results. Some cancer institutions

were beginning to implement universal screening for LS among all newly diagnosed colorectal cancer cases as early as 2006. In 2010, the Michigan Department of Community Health conducted surveillance to explore health plan coverage for LS testing finding no Michigan health plan coverage consistent with the EGAPP recommendation.
Impact: In September 2010, CDC convened a multidisciplinary working

was formed with the goal of reducing the cancer burden associated with LS. The LSSN facilitates implementation of universal LS screening by promoting sharing of resources, protocols, and data. Of the 91 current LSSN member institutions, 37 have universal screening protocols for LS that are consistent with the EGAPP recommendation, and 43 are willing to share data with the LSSN database. When the 91 LSSN member institutions were asked how the EGAPP recommendation influenced their LS screening protocol: 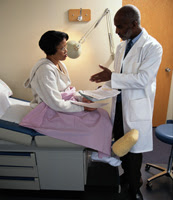