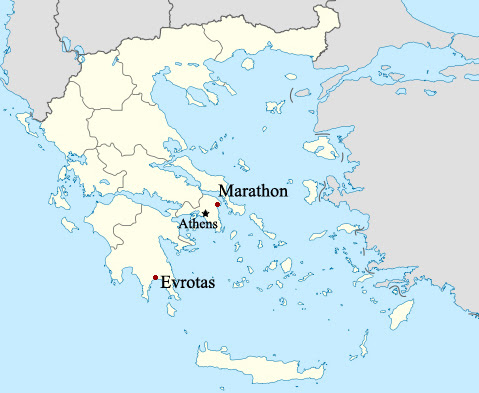 A map of Greece showing the locations of Evrotas, Athens and Marathon.
The Centers for Disease Control and Prevention (CDC) has received information that the number of locally acquired malaria cases in Greece has increased to six and the outbreak has expanded in two regions of the country. Between January 1 and August 3, 2012, Greece reports a total of 39 cases of malaria of which 30 are Plasmodium vivax. Twenty-four of those 30 cases occurred among immigrants from malaria-endemic countries and are thus believed to have been imported. However, some of these cases may have been locally acquired. The other six cases occurred among Greek citizens who have not traveled­ outside of Greece. The first of the locally transmitted cases (previously reported) was a 78-year old Greek man believed to have acquired the infection in Marathon, in the Attica region. His onset of symptoms was around the 7th of June and he reported no travel to an endemic country in the past five years. In 2011, an autochthonous case occurred in a nearby location. Two additional locally acquired cases have been reported in the Attica region, one in June in Markopoulo, a suburban town approximately 30 km southeast of Athens, and another in Marathon in July. No malaria cases have been reported in Athens. In Evrotas, an area in the Laconia region, 13 cases of P. vivax have been reported this year. Ten of the cases are classified as imported and 3 locally acquired. One of the locally acquired cases was reported in June, and the two most recent cases occurred in late July. The agricultural site of Evrotas in the Laconia region was the principal site of the 2011 P. vivax outbreak.
The Hellenic CDC continues to work with the European CDC and has responded by enhancing its surveillance systems for malaria cases and malaria vectors. In current- and previously affected- areas, mosquito control has been intensified, healthcare providers educated about early malaria diagnosis and treatment, and the public has been informed about the symptoms of malaria and the prevention of mosquito bites.
CDC does not recommend antimalarial drugs for travel to Greece at this time. Travelers to these two affected areas of Greece should use mosquito avoidance measures, such as insect repellant and sleeping in either an air conditioned or well-screened setting or under a treated bed-net, to prevent malaria infection.
See the CDC Malaria website for additional health information about malaria including prevention of mosquito bites and drugs for malaria prevention. For general health information for travelers to all areas of the world, see the CDC Traveler's Health website.
Publicado por salud equitativa en 4:30