Progress on a Universal Flu Vaccine 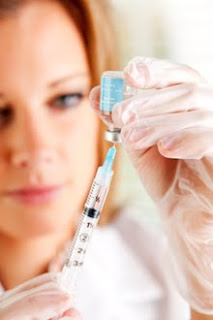 Progress on a Universal Flu Vaccine
Researchers have developed a method to generate antibodies that attack a diverse array of influenza viruses in mice, ferrets and monkeys. The accomplishment points the way to a universal flu vaccine.

Influenza, or flu, claims an average of 36,000 lives nationwide each year and hospitalizes 200,000. Influenza viruses continuously change, or mutate. Because of these changes, vaccines need to be reformulated annually to match the predominant circulating strains. A universal influenza vaccine—one effective against multiple strains for several years—would have an enormous impact on the control of influenza.

NIH-funded researchers previously found antibodies that can neutralize a broad range of influenza viruses. These antibodies attach to a region on the stem of hemagglutinin (HA), a protein on the surface of the virus that allows it to enter and spread from cell to cell. Unlike HA's head—which mutates readily, allowing the virus to become unrecognizable to antibodies—the stem varies relatively little from strain to strain. However, researchers haven’t been able to generate broadly neutralizing antibodies by vaccination.

Led by Dr. Gary J. Nabel, scientists from NIH’s National Institute of Allergy and Infectious Diseases (NIAID) set out to make a vaccine to elicit antibodies to multiple strains of H1N1, which include the flu virus responsible for last year's flu pandemic.

In parallel experiments with mice, ferrets and monkeys, the researchers first primed the animals’ immune systems using a vaccine made from a piece of DNA that encodes HA. The DNA was derived from a 1999 circulating flu virus. Mice and ferrets then received a booster dose of another virus: either the 2006-2007 seasonal flu vaccine or a vaccine made from a weakened cold virus containing HA. Monkeys were boosted with the seasonal flu vaccine only. The results appeared in the early online edition of Science on July 15, 2010.

The researchers found that animals given the prime-boost vaccination produced antibodies capable of neutralizing numerous H1N1 strains—from one that emerged in 1934 to others that appeared in 2006 and 2007. Although the vaccines were made from H1 subtypes, the antibodies neutralized other subtypes as well, including H5N1 (avian influenza). The broadly neutralizing antibodies, as expected, recognized the HA stem.

The scientists measured how well the vaccination protected animals from infection. Three weeks after receiving the boost, 20 mice were exposed to high levels of the deadly 1934 flu virus, and 80% survived. Mice receiving DNA only, seasonal flu vaccine only or a sham prime-boost vaccine all died. The researchers also saw protection against viral infection in ferrets, which are a good animal model for testing vaccine efficacy in humans.

"Generating broadly neutralizing antibodies to multiple strains of influenza in animals through vaccination is an important milestone in the quest for a universal influenza vaccine," says NIAID Director Dr. Anthony S. Fauci. "This significant advance lays the groundwork for the development of a vaccine to provide long-lasting protection against any strain of influenza.”

Trials to assess safety and immune responses to prime-boost influenza vaccines are already under way in humans, Nabel says. "We may be able to begin efficacy trials of a broadly protective flu vaccine in 3 to 5 years," he says.