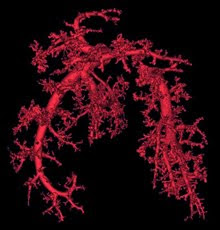 Making a Lung Replacement
Hot on the heels of progress toward a liver transplant substitute, researchers have made transplantable lung grafts for rats. The accomplishment could pave the way for the development of an engineered human lung.


Lungs have a limited ability to regenerate. The primary therapy for severely damaged lungs is currently lung transplantation—surgery to remove the lung and replace it with a healthy lung from a deceased donor. However, lung transplants are limited by the small number of donor organs available—not much more than 1,000 per year.

To be successful, an artificial lung would need to retain the complex branching geometry of the lung's airways. It would also require a large network of small blood vessels to transport oxygen and nutrients throughout the structure. Decellularization—the process of removing cells from a structure but leaving a scaffold with the architecture of the original tissue—has shown some success in other organs, including heart and liver. A team of researchers led by Dr. Laura Niklason of Yale University set out to build on this recent progress and develop a similar approach for lungs. Their work was supported by NIH’s National Heart, Lung and Blood Institute (NHLBI) and National Institute of General Medical Sciences (NIGMS).

The researchers harvested lungs from adult rats. Treating the lungs with a mild detergent solution for 2 to 3 hours removed the cells but left the lung architecture intact, as reported in the early online edition of Science on June 24, 2010. A careful analysis showed that a matrix of proteins remained behind to hold the lung’s shape.

To see if they could repopulate the matrix with cells and engineer a functional lung, the researchers injected endothelial cells into the blood vessels and epithelial cells into airways. They kept the matrix for up to 8 days in a novel bioreactor that was designed to mimic the pressure changes and ventilation a lung would experience. The researchers found that the cells reseeded the surfaces of the matrix in their appropriate locations. This finding suggests that the decellularized matrix maintains cues for the cells to attach and thrive.

The researchers tested the engineered lungs in rats for short time intervals (45-120 min) and found that the lungs inflated with air, with only some modest bleeding into airways. Most importantly, the lungs successfully exchanged oxygen and carbon dioxide like natural lungs.

To see whether their method might apply to human tissues, the researchers got human lung segments from a tissue bank. They were able to decellularize the tissues while preserving their architecture. They then reseeded the matrices with epithelial and endothelial cells and found that they adhered at their appropriate locations. This result supports the idea that the approach holds promise for human lung tissue.

"We succeeded in engineering an implantable lung in our rat model that could efficiently exchange oxygen and carbon dioxide, and could oxygenate hemoglobin in the blood. This is an early step in the regeneration of entire lungs for larger animals and, eventually, for humans," says Niklason. She notes that years of research with adult stem cells will likely be needed to develop ways to repopulate lung matrices and produce fully functional lungs for people.