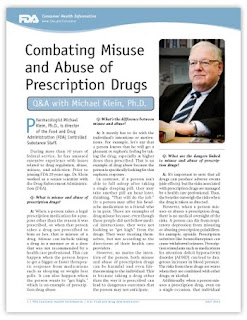 During more than 30 years of federal service, he has amassed extensive experience with issues related to drug regulation, abuse, misuse, and addiction. Prior to joining FDA 20 years ago, Dr. Klein worked as a senior scientist with the Drug Enforcement Administration (DEA).

Q: What is misuse and abuse of prescription drugs?

A: When a person takes a legal prescription medication for a purpose other than the reason it was prescribed, or when that person takes a drug not prescribed to him or her, that is misuse of a drug. Misuse can include taking a drug in a manner or at a dose that was not recommended by a health care professional. This can happen when the person hopes to get a bigger or faster therapeutic response from medications such as sleeping or weight loss pills. It can also happen when the person wants to “get high,” which is an example of prescription drug abuse.

Q: What's the difference between misuse and abuse?

A: It mostly has to do with the individual’s intentions or motivations. For example, let’s say that a person knows that he will get a pleasant or euphoric feeling by taking the drug, especially at higher doses than prescribed. That is an example of drug abuse because the person is specifically looking for that euphoric response.

In contrast, if a person isn’t able to fall asleep after taking a single sleeping pill, they may take another pill an hour later, thinking, “That will do the job.” Or a person may offer his headache medication to a friend who is in pain. Those are examples of drug misuse because, even though these people did not follow medical instructions, they were not looking to “get high” from the drugs. They were treating themselves, but not according to the directions of their health care providers.

However, no matter the intention of the person, both misuse and abuse of prescription drugs can be harmful and even life-threatening to the individual. This is because taking a drug other than the way it is prescribed can lead to dangerous outcomes that the person may not anticipate.

Q: What are the dangers linked to misuse and abuse of prescription drugs?

A: It’s important to note that all drugs can produce adverse events (side effects), but the risks associated with prescription drugs are managed by a health care professional. Thus, the benefits outweigh the risks when the drug is taken as directed.

However, when a person misuses or abuses a prescription drug, there is no medical oversight of the risks. A person can die from respiratory depression from misusing or abusing prescription painkillers; for example, opioids. Prescription sedatives like benzodiazepines can cause withdrawal seizures. Prescription stimulants such as medications for attention deficit hyperactivity disorder (ADHD) can lead to dangerous increases in blood pressure. The risks from these drugs are worse when they are combined with other drugs, or alcohol.

Additionally, when a person misuses a prescription drug, even on a single occasion, that individual might enjoy the experience so much that they begin to seek out the drug more often. Thus, drug abuse and drug dependence are serious risks of misusing prescription drugs.

Q: Why do people misuse and abuse prescription drugs?

A: Prescription drugs are often readily accessible in the home, so it’s easy to take more of them than recommended for a therapeutic reason, or to sneak a few from someone else’s bottle to see if you can “get high.”

One feature of prescription drug abuse is when a person continues to take the drug after it’s no longer needed, medically. This is usually because the drug produces euphoric responses. Prescription drugs are often preferred for abuse because of the mistaken belief that the drugs provide a “safe high.” But as I mentioned before, all drugs carry risks, and if these risks are not being managed by a health care professional, people can get into serious trouble.

Q: How big is this problem?

A: The prevalence of misuse and abuse of prescription medications is concerning. The Substance Abuse and Mental Health Services Administration (SAMHSA), a federal health agency, reports that in 2008, 52 million persons in the United States age 12 or older had used prescription drugs nonmedically at least once in their lifetime, and 6.2 million had used them in the past month. SAMHSA also reported that between 1998 and 2008, there was a 400 percent increase in substance abuse treatment admissions for opioid prescription pain relievers.

A recent Centers for Disease Control and Prevention (CDC) survey found that one in five high school students had taken a prescription drug without a doctor’s prescription. According to SAMHSA, the majority of these teenagers are obtaining the drugs from friends or relatives for free. Most concerning, the perception of risk of prescription drug abuse declined 20 percent from 1992 to 2008, based on data from a National Institute on Drug Abuse survey.

Q: What prescription drugs are being misused and abused?

A: SAMHSA reports that in 2008, nonmedical use of psychotherapeutic prescription drugs fell into four major classes: pain relievers, tranquilizers, stimulants, and sedatives.

Nearly 35 million Americans reported that they had nonmedical use of prescription pain relievers—including opioid-containing drugs such as hydrocodone (Vicodin), oxycodone (OxyContin, Percodan, Percocet), and fentanyl (Duragesic)—at least once during their lifetime.

Approximately 21.5 million Americans have used prescription tranquilizers for nonmedical purposes at least once. These include drugs prescribed for anxiety or insomnia, such as benzodiazepines—including diazepam (Valium), alprazolam (Xanax) and clonazepam (Klonapin)—and non-benzodiazepines such as zolpidem (Ambien), zaleplon (Sonata) and eszopiclone (Lunesta).

Finally, nearly 9 million Americans have used prescription sedatives nonmedically at least once. These sedatives include barbiturates such as amobarbital (Amytal), pentobarbital (Nembutal), and secobarbital (Seconal).

Q: Who is misusing and abusing these medications?

There also appears to be regional differences across the U.S. For example, SAMHSA reports that the highest past-year rates of nonmedical use of prescription pain relievers occur in Arkansas, Kentucky, Nevada, Oklahoma, Oregon, Tennessee, and Wisconsin.

Q. Should a person’s health care professional tell them about the risks associated with a medication with abuse potential?

A: Yes. The health care professional should talk to a patient about all of the warnings and precautions listed in the drug label for the medication being prescribed. In addition, if a medication guide is available, it will explain the risks of the drug in plain language. The pharmacy will provide the medication guide when a person picks up the prescription.

FDA also recommends that patients be vigilant when it comes to matters of their health. Reading information and asking questions are good practices, though they are only the first steps. For instance, individuals may not realize they are developing a drug abuse problem with a prescription drug, especially if they were initially using the drug as directed when they were patients.

Health care professionals should encourage patients to be aware of early signs of drug abuse, which can include using the prescription more frequently or at higher doses, but without medical direction to do so. Using the drug compulsively or not being able to carry out normal daily activities because of drug misuse are also signs of abuse.

Finally, health care professionals and pharmacists have a responsibility to remind patients not to share their medications with friends or family. Not only is this a dangerous practice health-wise, it is also illegal.

Q: How does FDA help prevent misuse and abuse of prescription medicines?

A: FDA works hard to meet the challenges of preventing misuse and abuse of prescription drugs, while making sure that medically appropriate drugs are available for the patients who need them.

The primary way FDA works to prevent misuse and abuse is through educating patients, caregivers, and health care professionals. This often occurs through the information FDA provides to each of these groups, such as in drug labels, medication guides, and alerts.

Q: How is a prescription medication classified as having potential for abuse?

A: During FDA's drug review process, certain data can give indications that a drug has abuse potential. The chemical structure may be similar to a known drug of abuse. When the drug is given to animals, it may produce behaviors that are like those produced by abusable drugs. In humans, the drug may produce a high rate of euphoria.

FDA considers these and all abuse-related data to make a determination regarding abuse potential, which is a part of the safety evaluation of a drug. If a drug is deemed to have abuse potential, DEA is informed and they may add the drug to the list of substances covered by the Controlled Substances Act (CSA).

In addition, FDA can become aware that a drug has abuse potential through other means. For example, there may be epidemiological reports of abuse that only became evident after the drug was marketed. Also, DEA informs us that there is an increase in law enforcement actions related to a specific drug. In both cases, FDA reviews all available data and makes a scientific and medical assessment of whether the drug has abuse potential. If it does, DEA is informed and may schedule the drug under the CSA.

Q: What are the keys to preventing abuse of prescription medicines?

A: Be informed about the effects of prescription drugs and be vigilant. Know what medications your loved ones are taking and watch for signs of changes in behavior. For instance, have you noticed negative changes in your child's behavior or grades? Is your spouse evasive about how much medication he or she is taking? Do you have friends that you suspect might be pilfering prescription drugs from your medicine cabinet?

SAMHSA has a great website on signs of prescription drug abuse4.


If you are taking medications that have abuse potential, use the drugs only as directed. Don’t share them, and store them in a safe, secure place. Count the pills regularly to make sure no one else is using them. If you are having a house party or an open house, make sure the medications are properly secured.

Finally, all drugs should be disposed of properly after they are no longer needed. If no specific disposal directions are given with the medication, discard the drugs by mixing with undesirable substances, sealing them in a container, and placing them in the trash. You can also call your local DEA office for advice on alternative disposal methods.


Q: What can I do if I find that someone I know is abusing prescription drugs, or if I find myself becoming dependent on them?

A: SAMHSA has a website (www.samhsa.gov5) and a telephone hotline (800–662–HELP[4357]) to aid in finding treatment facilities in different areas of the country.
I recommend contacting them and a health care professional, as no single type of treatment is appropriate for everyone who is abusing prescription drugs.

This article appears on FDA's Consumer Updates6 page, which features the latest on all FDA-regulated products.