Hantavirus Infection in the Republic of Georgia | CDC EID

Abstract
We describe a laboratory-confirmed case of hantavirus infection in the Republic of Georgia. Limited information is available about hantavirus infections in the Caucasus, although the infection has been reported throughout Europe and Russia. Increasing awareness and active disease surveillance contribute to our improved understanding of the geographic range of this pathogen.

Rodent-borne hantavirus infections causing hemorrhagic fever with renal syndrome (HFRS) occur throughout most of Europe and Russia. The pathogenic hantaviruses detected in Europe and Russia include Puumala, Dobrava, Saaremaa, Tula, Amur, and Hantaan viruses (1,2). Seroprevalence studies of hantavirus infection in Europe have shown prevalence rates as high as 6%–9% in Sweden, Estonia, and European Russia (1). The circulation of hantaviruses is specific predominantly to rodent species and thus correlates with the host range of the rodent reservoir. Several lineages of Dobrava virus circulate in Europe and Russia (3–6), and are named according to their rodent reservoirs: Apodemus flavicollis (Dobrava-Af), A. agrarius (Dobrava-Aa), and A. ponticus (Dobrava-Ap). Dobrava-Aa is suspected to be the predominant strain in central Europe (7).

The clinical manifestations of hantavirus infection vary and depend largely on the strain of the infecting virus. Classic HFRS is characterized by fever, acute renal failure, hypotension, hemorrhage, and vascular leakage. Puumala virus typically induces a mild variant of HFRS (nephropathia epidemica) accompanied by high fever, headache, backache, and abdominal pain. Mild hemorrhagic manifestations, including conjunctival hemorrhage or petechiae on the trunk or palate, also may occur. Severe clinical manifestations are rare (<1% of patients) but can include acute renal failure, severe neurologic manifestations, and death (8). Dobrava-Aa may induce a similarly mild clinical course of illness to that of Puumala virus (6).

Information is scant about hantaviruses in the Republic of Georgia. Although reports of hantavirus infection from other countries in the surrounding area suggest that this pathogen circulates in the Caucasus, the incidence of these infections is unknown.

The Patient
A 31-year-old male resident of Tbilisi, Georgia, sought treatment at the Infectious Pathology, AIDS and Clinical Immunology Center in early June 2008, six days after onset of illness. At that time, he was enrolled in an ongoing laboratory-based surveillance study of acute febrile illness (AFI). Initial clinical symptoms were fever (maximum axillary temperature 39°C), arthralgias and myalgias in the lower extremities, back pain, vomiting, and diffuse abdominal pain. Vital signs indicated a pulse rate of 87 bpm and blood pressure of 140/80 mm Hg. The physical examination noted mild hepatosplenomegaly and pharyngeal injection. The chest radiograph and ultrasound of the abdomen were normal. No preexisting illnesses were reported. Travel history included regular trips to Marneuli district (a rural district south of Tbilisi). No specific rodent exposures were noted, and no other travel was reported.

An elevated creatinine level (214 μmol/L, reference range 53–115 μmol/L) was noted on day 9 of illness, along with a decrease in urine output. Proteinuria (3 g/24 h), microscopic hematuria, and elevated blood pressure (160/90 mm Hg) were also observed. The patient was transferred to the nephrology department of the Institute of Urology in Tbilisi with a diagnosis of acute renal failure. Patient's fluid input and output were closely regulated, and his condition improved gradually without dialysis. 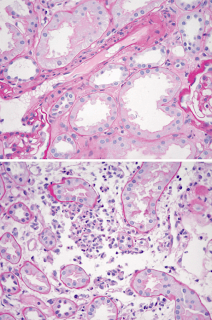 Figure. Acute tubular necrosis in a renal biopsy specimen of the patient. Magnification ×40.

On the 11th day of illness, the patient's general condition started to improve, with increased urine output, resolution of abdominal pain, and normalization of blood pressure (120/70 mm Hg). No sequelae were reported at 1-month follow-up.

Conclusions
The clinical presentation and results of serologic tests for this patient who had renal failure but no apparent hemorrhage were consistent with results previously described for hantavirus infection. Although the differential diagnosis included other infectious and noninfectious causes of renal failure including leptospirosis, ongoing surveillance of AFI in Georgia provided the serologic testing capability that enabled clinicians to identify a hantavirus infection as the cause of this illness characterized by high fever and evidence of renal dysfunction (increased serum creatinine, proteinuria, and hematuria).

The strain of the infecting virus is unknown, but serologic results, along with the available information from surrounding countries, implicate Dobrava virus as the infecting strain. The relatively mild clinical symptoms of this patient suggest that a variant of Dobrava virus, or a closely related hantavirus strain that cross-reacts with Dobrava, may be the etiologic agent. Information about the circulating virus strains, clinical manifestation, rodent hosts, and disease prevalence are lacking for the Caucasus. Further studies are needed on potential rodent hosts and characterization of circulating strains.

Acknowledgments
We thank Marina Endeladze, Irma Tchokhonelidze, and all participants of the Acute Febrile Illness Surveillance Network in Georgia for their contributions to this study.

This study was supported by the US Department of Defense, Global Emergence Infections Surveillance Program, and by the Centers for Disease Control and Prevention, International Emerging Infections Program in Egypt.

Dr Kuchuloria is a board certified endocrinologist and has been an investigator and clinical program coordinator with the Biological Threat Reduction Program in Georgia since 2006. Her research interests are dangerous (tularemia, anthrax, bunyaviruses) and nosocomial infections.