By Osman Shabir, M.Sc.Reviewed by Liji Thomas, MD
Stress is often a factor that contributes to or worsens many conditions ranging from psoriasis to irritable bowel syndrome, perhaps because it results in compromised immunity. Recent evidence has shown that stress may be involved in accelerating the onset of Alzheimer’s disease as well as worsening the disease course. 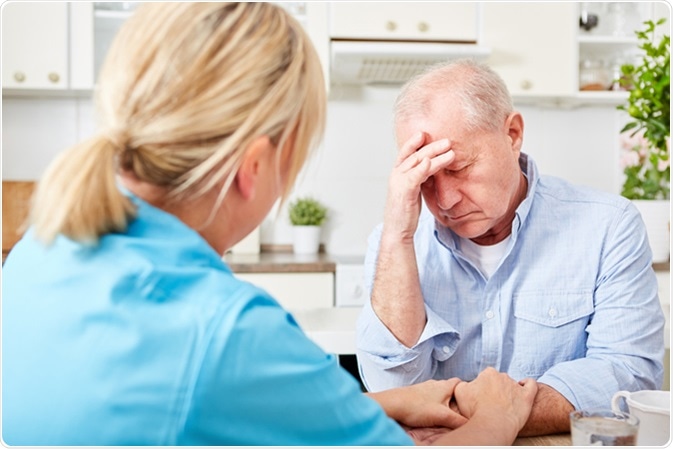 How Does Stress Affect the Body?

Stress is known to activate key brain regions, namely the hypothalamic-pituitary-adrenal (HPA) axis, to stimulate the production and secretion of stress hormones such as corticosteroids (e.g. cortisol) and adrenalin.
Consequently, there is an elevation in heart rate, blood pressure and energy levels, as cortisol increases blood sugar levels and allows the brain to use the insulin more efficiently. At the same time, it also depresses the normal immune responses, digestive function, sexual function and other ‘non-essential’ functions. Inevitably, stress has an effect not only on the body, but the brain as well.
Long-term repeated or chronic stress can have negative consequences on multiple physiological processes leading to anxiety, depression, insomnia, cardiovascular disease, digestive impairment as well as potentially injuring cognition, causing early stage dementia.

A majority of our knowledge relating to stress and Alzheimer’s is from a vast database of animal studies, as the study and manipulation of stress in humans is difficult. The major toxic protein central to Alzheimer’s disease is beta-amyloid, which forms plaques in the brain and around vessels and is a primary pathological hallmark of Alzheimer’s disease. Stress has been shown to increase the production of toxic beta-amyloid in animal models of Alzheimer’s subjected to both acute and chronic stress. This has further been correlated with an accelerated decline in cognition in these animal models compared to those without any stress. Furthermore, early-life stress can have prolonged and permanent effects on the brains of these animals, with marked increases to amyloid levels within the brain and cerebrospinal fluid (CSF).

The second key Alzheimer’s protein is tau. Tau forms tangles which is the primary trigger for neuronal death in Alzheimer’s disease. Tangles are usually formed due to the hyper-phosphorylation of tau. Several studies have shown that stress exposure can lead to the hyper-phosphorylation of tau in animal models with stress compared to those who do not.
Central to both beta-amyloid and tau pathology exacerbation by stress induction is the role of stress hormones such as corticosteroid and corticotropin releasing factor (CRF). For example, animals lacking CRF (Crf-/- mutants) have been shown to have significant reductions to both amyloid and tau pathologies in Alzheimer’s disease progression due to a reduced overall stress response. Furthermore, increasing CRF can actually enhance the deposition of beta-amyloid in the brain as well as hyper phosphorylating tau.
As mentioned, a majority of the evidence relating stress and Alzheimer’s has come from animal studies. There are some clinical studies which have also shown some links between stress and Alzheimer’s pathology exacerbation, but not with the onset.

Stress and the Treatment of Alzheimer’s Disease

With the knowledge that stress enhances Alzheimer’s pathology in animal models, it might be assumed that lowering stress levels would have a beneficial impact on ameliorating the pathology and symptoms of Alzheimer’s in humans.
Lowering CRF levels by inhibiting CRF-receptors (CRFR1) in animal models has resulted in a reduction in the total levels of amyloid and plaques, in addition to the improvements in cognitive function. Furthermore, the inhibition of glucocorticoid receptors in animal models has also been associated with a lowering of Alzheimer’s pathology, with clinical trials in a small cohort of patients showing some improvement in cognition. However, compared to the animal experiments, clinical recovery was modest.
Unfortunately, some other drugs that work in animal models do not seem to work effectively in humans and several clinical trials have failed at Phase I or II of clinical trials. Although animal models are crucial to our understanding of human health and disease, it is inevitable that due to species-specific differences, as well as the increased complexity of all systems in humans, many studies cannot be replicated effectively during clinical trials. Therefore, much more clinical work needs to be done before reaching definitive conclusions on how stress affects Alzheimer’s disease, and whether what anti-stress therapies can actually be used to treat Alzheimer’s disease.
In summary, stress alone is a not a key factor in the onset of Alzheimer’s disease; however, it may be important in the progression of the disease, as well as worsening the symptoms due to impaired immune responses which are key in Alzheimer’s disease. Much more work, however, needs to be done in patients before making clinical recommendations.