By Lois Zoppi, BA.
Radioemobilization is a generally painless procedure for liver cancer that directly targets the blood supply to the tumor site. Approximately 70 to 95 percent of patients will experience improvements in liver-related symptoms and it can improve survival rates from months to years. It is a palliative treatment, meaning it relieves symptoms but does not provide a cure. 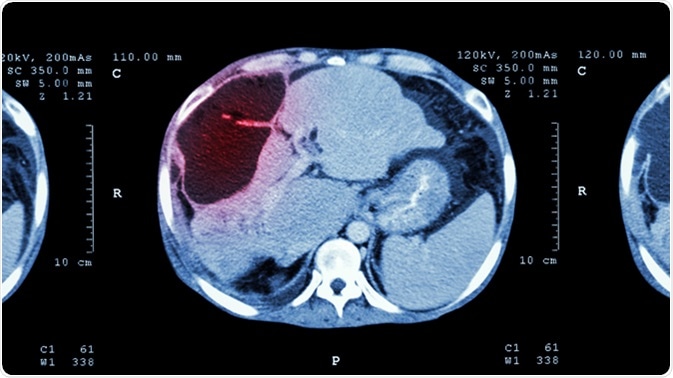 What is Liver Cancer?

Liver cancer is a serious type of cancer that starts in the liver, sometimes called hepatic cancer. The most common type of liver cancer is hepatocellular carcinoma (HCC), and it is the sixth most common malignancy worldwide. Symptoms include weight loss, jaundice, itching, nausea, swollen abdomen, loss of appetite and a lump in the right side of the abdomen.

Radioemobilization is a treatment for liver cancer combining radiation therapy and emobilization. It involves inserting tiny glass beads called microspheres into blood vessels that feed the tumor in order to block the blood supply to the cancer cells. The beads, which are smaller than a human hair in width, are filled with radioactive isotope yttrium Y-90.
It is a minimally invasive procedure, and while it isn’t a cure for liver cancer, it alleviates symptoms and slows the progression of the cancer.

Radioemobilization uses contrast agents (used to improve the visibility of the blood vessels) and X-ray imaging. A catheter (a thin plastic tube) is inserted into the blood vessel (the femoral artery) and moved into the treatment area. The microspheres are also inserted through a catheter and advanced to the blood vessels that supply the tumour with blood. The high dose of radiation to the cancer cells starves the cells of the oxygen and nutrients necessary for growth.
The microspheres remain inside the liver after the yttrium-90 radiation has disappeared over a period of 30 days, but cause no problems. The microspheres only give off radiation over an area of a few square millimeters, so damage to surrounding tissue is minimal.

Overall, radioemobilization is painless and takes around an hour to complete. Anesthetic is used to numb the intravenous incision site in the groin and sedatives are sometimes used to relax the patient during the procedure. A catheter is passed through the femoral artery and into the liver where the microspheres are injected.
Brief pain may be experienced while the microspheres are injected along with a short-term feeling of warmth as the contrast agents pass through the body. Some patients also feel the need to pass urine.
It is important that you limit your contact with other people after radioemobilization, and it is suggested that for at least seven days after the procedure you do not:
Side effects of radioemobilization are mild, and commonly include:
Rare side effects include:

Several measures have been put in place to limit and control the risks of radioemobilization.
After the procedure, some patients have side effects called post-emobilization syndrome, the symptoms of which include fatigue, fever, nausea and vomiting. Patients may also experience pain after the procedure due to the ischemia of the treated area. Oral or intravenous medications are typically sufficient to control this side effect. Any side effects usually pass within five days.

Radioemobilization is a minimally invasive treatment that provides relief from symptoms but does not provide a cure. As with any treatment, there are risks and side effects, but extensive measures are put in place before the procedure is done to limit the incidence of complications. It presents fewer side effects than external beam therapy, and targets the blood supply to the tumor directly.