What Is Triple-Negative Breast Cancer? 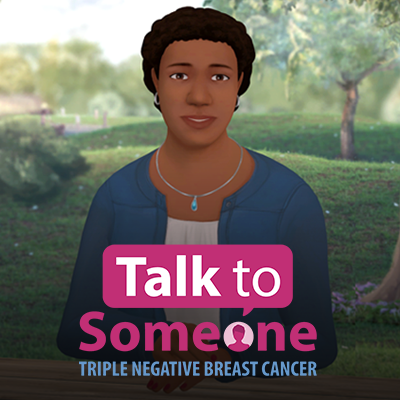 Talk to Someone: Triple-Negative Breast Cancer is an interactive conversation where you can speak to a virtual coach, Linda, and ask questions in a safe environment.


Triple-negative breast cancer is a kind of breast cancer that does not have any of the receptors that are commonly found in breast cancer.
Think of cancer cells as a house. The front door may have three kinds of locks (called receptors)—
If your cancer has any of these three locks, doctors have a few keys (like hormone therapy or other drugs) they can use to help destroy the cancer cells.
But if you have triple-negative breast cancer, it means those three locks aren’t there. So doctors have fewer keys for treatment. Fortunately, chemotherapy is still an effective option.

How Is Triple-Negative Breast Cancer Treated?

Often, patients first need to have the lump removed (a lumpectomy) or the entire breast removed (a mastectomy). Then they have chemotherapy treatments to target any cancer cells that can’t be seen—cells remaining in the breast or that may have spread into other parts of the body. Sometimes doctors recommend chemotherapy before surgery to shrink the cancer.

With lumpectomy, a surgeon removes the lump from your breast. He or she also checks nearby lymph nodes (the little oval-shaped organs that are part of your immune system) to make sure the cancer hasn’t spread. The surgery takes an hour or two, and most women spend the day at the hospital, but there’s usually no need to stay overnight. For a mastectomy, your surgeon removes the breast, and checks the nearby lymph nodes to make sure the cancer hasn’t spread. Some women choose to have breast reconstruction during the same surgery.

Lumpectomies are usually followed by radiation therapy. This is where high-energy radiation is given to your breast to kill any remaining cancer cells. It usually takes about 20 minutes per day. Most women go in four to five days a week for about six weeks. You’ll see a radiation doctor to have this done.

Cells from the cancerous lump may have spread somewhere else in your body. They’re so small the doctors can’t see them, and they don’t show up on any of the tests. But they could grow until you have a new tumor somewhere else in your body. So the goal of chemotherapy is to kill those little cancer cells wherever they may be. Chemotherapy really lowers the chance that your cancer will come back.

What Are Some Common Side Effects of Treatment?

You may lose some or all of your hair within about two to four weeks of starting chemotherapy. New treatments can help with hair loss, so ask your doctor about that if it’s a big concern for you. Your hair will grow back starting around a month to a month and a half after your last chemotherapy treatment.

Most women feel sick and exhausted for a day or two after each chemotherapy treatment. It’s different for everybody, and you have to try the first round or so of chemotherapy before you know for sure. If you feel queasy, your doctor can give you a prescription for medicine to treat the nausea.

You may feel tired after chemotherapy and radiation therapy. Most of those side effects go away a few weeks after therapy ends.

On or around the skin where you’ve been treated with radiation, you may get some redness or peeling, kind of like a sunburn. Your doctor will tell you the best way to treat these skin changes.

Do I Need Genetic Counseling and Testing?