Seroprevalence of Chikungunya Virus after Its Emergence in Brazil

Chikungunya has had a substantial impact on public health because of the magnitude of its epidemics and its highly debilitating symptoms. We estimated the seroprevalence, proportion of symptomatic cases, and proportion of chronic form of disease after introduction of chikungunya virus (CHIKV) in 2 cities in Brazil. We conducted the population-based study through household interviews and serologic surveys during October–December 2015. In Feira de Santana, we conducted a serologic survey of 385 persons; 57.1% were CHIKV-positive. Among them, 32.7% reported symptoms, and 68.1% contracted chronic chikungunya disease. A similar survey in Riachão do Jacuípe included 446 persons; 45.7% were CHIKV-positive, 41.2% reported symptoms, and 75.0% contracted the chronic form. Our data confirm intense CHIKV transmission during the continuing epidemic. Chronic pain developed in a high proportion of patients. We recommend training health professionals in management of chronic pain, which will improve the quality of life of chikungunya-affected persons.
Chikungunya is an emerging mosquitoborne disease caused by an alphavirus (chikungunya virus; CHIKV) from the Togaviridae family (1). Reports of outbreaks of chikungunya were not frequent until the beginning of the 21st century; however, some serologic studies provided evidence that CHIKV had circulated in a sylvatic cycle in nonhuman primates (2). In 2004, an outbreak of chikungunya emerged in some Indian Ocean islands (Comoros, Seychelles, and Mauritius) (2) and later spread to Reunion Island; the 266,000 recorded cases represented an attack rate of 35% (3). In the following years, the disease circulated in Italy, France, and India (3), and in 2013 it was introduced in the Americas, causing an epidemic of nearly 2.6 million autochthonous cases in >40 countries from the southern United States to Argentina through December 2017 (4). Along with Zika and dengue viruses, chikungunya virus has become a substantial global public health threat, not only because of the high magnitude of the epidemics but also because it can produce highly debilitating clinical symptoms, including intense joint pain that can last for years (2).
Brazil confirmed autochthonous cases of chikungunya in 2014 simultaneously in 2 regions: Northern, in Oiapoque/Amazonas, caused by Asian genotype virus; and Northeast, in 2 cities (Feira de Santana and Riachão do Jacuípe-Bahia), caused by the East/Central/South African (ECSA) genotype (5,6). In 2015, there were 20,661 notified cases of this disease; 271,824 cases were notified in 2016 and 171,930 cases in 2017 through epidemiologic week 35. The disease has affected >50% (2,829/5,570) of Brazilian municipalities (7).
In the Americas, scientific investigation on CHIKV seroprevalence is scarce; to date, only 6 studies have been published. Three of the published studies involved blood donors; 1 in Puerto Rico, with seroprevalence of 23.5% (8); 1 in Guadeloupe, with 48.1% seroprevalence; and 1 in Martinique, with 41.9% seroprevalence (9). Another study used a convenience sample of a single laboratory of Saint Martin, whose seroprevalence was 16.9% (10), and the fifth used a sample from a small rural area population in Brazil, where seroprevalence was 20% (11). The only study in South America involving random sampling of urban population was in Nicaragua, where the seroprevalence was 32.8% (12). Thus, we consider it important to produce information on seroprevalence of CHIKV in urban areas of Brazil.
We estimated the seroprevalence of CHIKV 1 year after the introduction of the virus in the population of 2 urban areas in Brazil, Feira de Santana and Riachão do Jacuípe-Bahia, that are affected by the ECSA genotype. We further report the proportion of symptomatic cases of chikungunya and the proportion of patients that had the chronic form of disease.

Figure 1. Notified cases of chikungunya georeferenced by household in Feira de Santana (A; n = 1,339), and Riachão do Jacuípe (B; n= 1,536), Bahia state, Brazil, during epidemiologic week 32 of 2014...
We conducted a cross-sectional population-based study through household interviews and serologic survey during November–December 2015, involving residents in delimited areas of 2 cities, Feira de Santana and Riachão do Jacuípe. These cities, which reported early epidemics of chikungunya in Brazil caused by ECSA genotype (5,6), are situated in Bahia state in northeastern Brazil (Figure 1), which has a hot, semiarid climate. In 2014, Feira de Santana had 612,000 inhabitants and a population density of 457.4 inhabitants/km2; Riachão do Jacuípe had 35,322 inhabitants and a population density of 28.5 inhabitants/km2 (13). These cities did not have Aedes albopictus mosquito infestations; the only vector present was Ae. aegypti. The mean of Premise Index (PI) of Ae. aegypti mosquitoes in 2014 was 1.1% in Feira de Santana and 2.0% in Riachão do Jacuípe, according to the records of the Vectors Control Program of the Health Department of Bahia State in Salvador, Bahia. 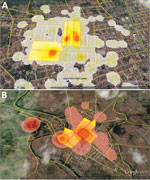 Figure 2. Density of notified cases of chikungunya by census tract in A) Feira de Santana and B) Riachão do Jacuípe, Bahia state, Brazil, during epidemiologic week 32 of 2014 through week 11...
The study sampling frame was the general population of the 2 cities living in the epicenter area of the early chikungunya epidemics. To identify these epicenters, we georeferenced the cases of chikungunya notified to the Department of Health of the 2 municipalities, from epidemiologic week (EW) 32 of 2014 to EW 11 of 2015, using the geographic network of the cartographic base of each city. We then plotted the cases in the respective census tracts and estimated the kernel density (14) to delimit the census tracts that reported the highest number of cases (Figure 2).
Fieldworkers visited all households in the selected areas (areas with the highest density of cases, or hotspots). For the general population survey, we invited all household members who were >1 year of age to take part in the study and have a questionnaire answered if they had lived in the city for the last >6 months. We estimated the sample size for this survey as 296 persons in the delimited area of Feira de Santana and 295 in the delimited area in Riachão do Jacuípe, and estimated 30% seroprevalence, 95% confidence, and 80% power. The Research Ethics Committee of the Institute of Collective Health/Federal University of Bahia approved this study (no. 986.229 of 03/03/2015).

For the general population survey, we conducted interviews using a semistructured questionnaire installed on tablets to register demographics, socioeconomics, household characteristics, and health status, especially self-reported chikungunya infection. We trained undergraduate students of health to visit all households in the area, explain the project objectives, and, when allowed, collect participants’ signatures in the Free and Informed Consent Form (FICF) and carry out the interviews. For participants <18 years of age, we used the Term of Assent and a responsible adult signed the document.
After interviewing all residents in each house, we randomly selected 1 to participate in the serologic survey. This random sample was without replacement. Thereafter, a laboratory technician used a specific FICF and collected 5 mL of blood per venipuncture, in accordance with current biosafety standards, from consenting participants. Local laboratory staff separated the serum by centrifugation and conditioned it at −20°C. We transported the aliquots to the virology laboratory of the Federal University of Bahia/Institute of Health Sciences, where we processed these samples. We used ELISA (Euroimmun, Lübeck, Schleswig-Holstein, Germany) to identify specific antibodies against CHIKV, IgM, and IgG, according to the manufacturer’s instructions (15). We considered any person with CHIKV, IgM, or IgG (or both) detected in the serum as CHIKV infected. The Euroimmun chikungunya IgM kit considers a ratio between the extinction value of the sample by the extinction value of the calibrator given within the kit. The lower detection limit of the CHIKV ELISA is ratio 0.05 IgM and 0.06 IgG. Samples with ratio <0.8 are considered negative, and those >1.1 are positive.
To calculate the proportion of symptomatic persons, we considered those who declared they have had chikungunya disease; those who reported fever and arthralgia as disease symptoms, at minimum, from August 2014 through the interview date; and those who had IgM- or IgG-positive tests. If the symptoms of joint pain, especially in extremities, had persisted for >3 months after the onset of the disease, we considered them in the chronic phase (16). We considered asymptomatic those who reported they had not had CHIKV infection but who had positive results for CHIKV IgM, IgG, or both.

We analyzed the data using SPSS version 22 (https://www.ibm.com/analytics/data-science/predictive-analytics/spss-statistical-software). We reported the incidence of CHIKV infection (total and according to the variables of interest) as percentages with a 95% CI. We used the Pearson χ2 test to assess statistically significant differences (p<0.05) for categorical variables.
Top