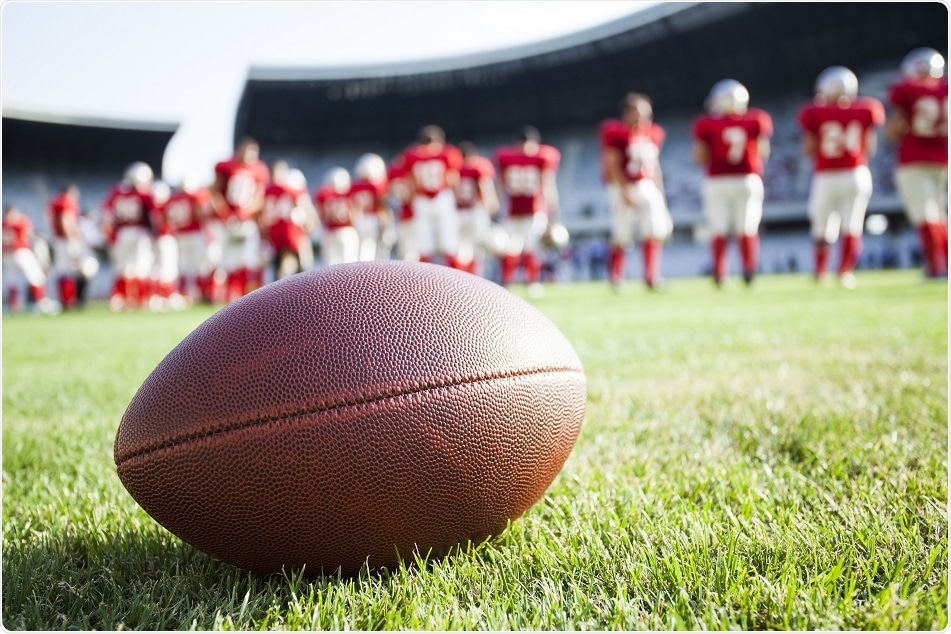 Credit: melis/ Shutterstock.com
The study conducted by scientists from the University of North Carolina involving college-age linemen, revealed that sleep breathing problems may occur much earlier for football players than for the general population.
Although the cause of increased risk of sleep apnea is not possible to determine, the study gives a comparison of competitive athletes of the same age which indicates a link between physical fitness specific to football linemen and the health risk.
Although the sleep apnea risks identified in college-age linemen are not as high as those previously identified in older players, the findings suggest higher future risks and the need to consider the potential outcomes of college training, specifically for linemen who stop conditioning training after their football career.
Dr. Jane Gaultney, UNC Charlotte sleep psychologist, noted that there have been two studies–one for retired football players and the other for current football players which revealed a greater risk for sleep apnea.
The current study targets candidates who have early signs of the condition,including college linemen who were at greater risk, noted Dr. Joseph S. Marino, the co-author of the study.
Participants included track athletes because their sport requires a lean body-type which differs with the standard bulk of the linemen, but are subject to similar levels of physical training, exertion, and athleticism.
The scientists’ reasoning for the study features is that the most typical cause of sleep apnea in older people is pretty much understood and is associated with the neck structure.

Among adults, the collapsing airway is a common cause of sleep apnea, but it's increasing among children as children become more obese. Generally, among children it is tonsils and adenoids – the tonsils get enlarged and restrict the airway. It's not a condition that only occurs in older adults or in children with infections though – even a younger adult who has that massive neck can have it.”
Dr. Jane Gaultney, UNC Charlotte

According to Marino, there is strong correlational data that connects sleep apnea to neck circumference. They identified that the lineman had significantly larger necks related with the leaner control group and which aligned well with their data.

The current study assessed data from the two test groups obtained with the use of the Multivariable Apnea Prediction survey–a self-report tool covering obstructive sleep apnea symptoms, in addition to physiological measures, such as tonsil size, neck circumference, and a measure of the amount of clear space between the roof of the mouth and the base of the tongue, which are linked to obstructive sleep apnea.
Although the outcomes did not show a high tendency of sleep apnea in the college-age football linemen, both the physiological measures and self-report suggested significantly greater risk of this condition in the football players when related with the track athletes.
Gaultney added that the linemen who work out throughout the day and maintain their body configuration may also be developing a greater risk of sleep apnea, and this condition does not occur due to fat issue, as they have more bulk, rather than body fat.
linemen have more body fat compared to players of other positions. Based on the overall size of the athlete, linemen feature a high percentage of lean mass, but the crucial factor is the fat mass in the region around the neck and torso, seen most notably in linemen. The combination of the athlete’s mass in these anatomical regions lead to the increased risk of sleep apnea, explained Marino.
While no studies have been conducted on the risks for sleep apnea in college football players after college, the scientists emphasis football players face a risk in later life; for college-only players, that may increase over their lifetime.
Screening the players with this system can help with the combination of survey and non-invasive methods that can target the players who are at higher risk and make them aware of the future risks to prompt them to change. This can lead to a potential outcome, said Marino.
Gaulteny commented: “The suspicion that a health intervention might be needed was, in part, what spurred the study. You can alert people that if they continue on this path, the likelihood is they are going to graduate and they are not going to be as active as when involved in their collegiate sport, leading to an increase in fat accumulation. That can mean that they are already on the path to sleep disordered breathing, even if they don't have it now. If people understand this, they can modify their outcomes - they can change and be healthier."
Source:
Publicado por salud equitativa en 10:08