By Brett SmithJanuary 15, 2018
Scientists at the Centre for Research in Agricultural Genomics (CRAG) in Spain have identified the members of a protein family linked with the internal clocks of plants that act sequentially to restrict plant growth until just before daylight, according to a new study published in the journal Current Biology. 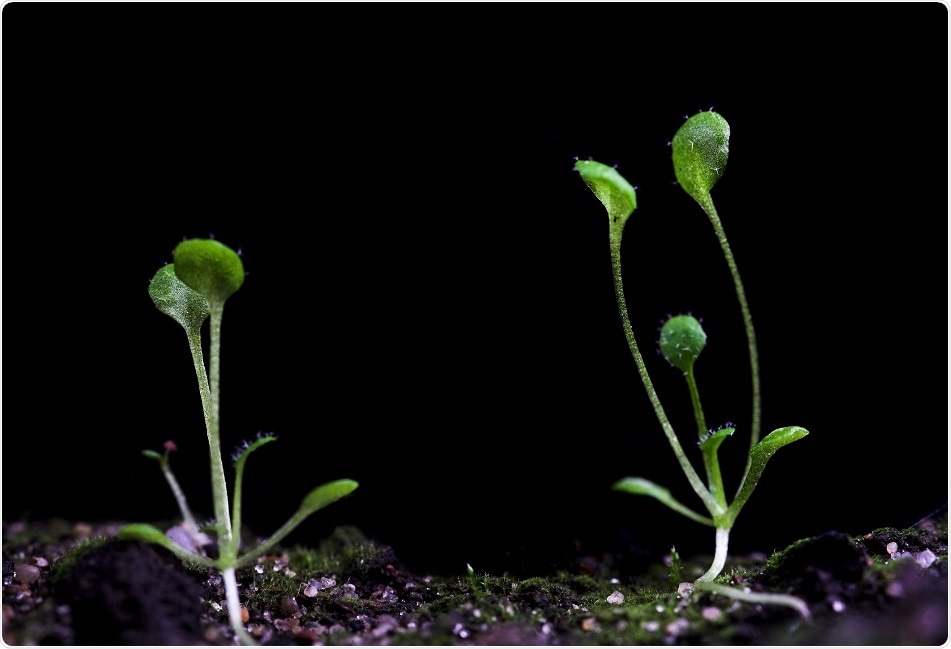 Credit: Vasiliy Koval/ Shutterstock.com
This research could reveal how plants manage various types of stress that affect their growth, like drought or high temperatures.
The new study is related to recent Nobel Prize-winning research that revealed the discovery of a set of proteins in fruit flies that act as an internal 24-hour clock. We have known for centuries that plants and animals have an internal clock, or circadian rhythm, but the actual mechanism behind it had hitherto eluded discovery.
The new study focused on a scientific favorite, Arabidopsis thaliana, that elongates its steam just prior to dawn during winter months. Research studies in the past several years have revealed that this extension in young seedlings is controlled by PIF proteins, the cellular accumulation of which is dependent on sunlight.
Hence, light encourages the deterioration of PIF proteins throughout the day. During the night, PIF proteins build up inside the cell, and just before dawn, they promote stem growth.
To determine why the stalk grows only before dawn and not during the night, researchers first looked at a paper published in 2016 that uncovered an internal clock protein (TOC1 or PRR1) acting as a nighttime gate, permitting PIF to do its work just before daylight.
The study team expanded on this finding by searching for other members of the same internal clock protein group, the PRR family of proteins. Researchers conducted an exhaustive investigation of the interactions between the proteins and the DNA of the Arabidopsis thaliana plant.
This evaluation showed a gene called CDF5 triggers stem growth just before dawn. Scientists have revealed the expression of the CDF5 gene is tightly regulated by the combination of various PIF proteins and by PRR clock proteins. The researchers found that CDF5 builds up significantly during the pre-dawn phase, when it triggers the cellular extension and, subsequently, the extension of the stem.
To authenticate the function of these genes and proteins, the scientists identified the growth of arabidopsis plants transporting genetic mutations. Plants that had dropped one of the PRR family genes (PRR7) grew longer than their wild-type counterparts. The same occurred in plants where the scientists modified the CDF5 gene so it might be expressed during the 24 hours, independently of the PIFs and PRRs activities.

Our results show that the regulation of plant growth has evolved in plants to encompass the orchestrated sequential action of the PRRs. This demonstrates the dual role of the PRRs—as regulators of the central clock components and as physiological repressors of growth.”
Elena Monte, assistant professor at CRAG

The study team concluded that the PRR family of proteins act in a sequence throughout the day and most of the night to curb the action of the PIF proteins. The concentrations of various PRR proteins (PRR1, PRR5, PRR7 and PRR9) were seen to rise and fall sequentially in 24-hour periods. At the end of the night, the overall quantity of PRR proteins in the cell hits its lowest point, allowing PIF proteins to function, which are at their highest concentration due to a lack of light.
Although some PIF proteins can be detected during the day, they cannot trigger the elongation of the stem until just before dawn, when the PRR gate opens, coinciding with ideal humidity for the extension to occur.
Source:
https://www.eurekalert.org/pub_releases/2018-01/cfri-tcc010918.php
Publicado por salud equitativa en 10:12