Are You Aware? Quick Facts About Kidney Disease

Are You Aware? Quick Facts About Kidney Disease

About 9% of Patients With Moderate to Severe Chronic Kidney Disease Use Prescription NSAIDs
Nonsteroidal anti-inflammatory drugs (NSAIDs) are commonly used to relieve pain. However, NSAIDs have been associated with acute kidney injury in the general population and with progression of disease in patients with chronic kidney disease (CKD). Thus, special care is considered necessary when these drugs are prescribed to patients at high risk of having kidney injury or kidney complications. Data from the National Health and Nutrition Examination Survey (NHANES) indicate that use of prescribed NSAIDs remained fairly constant from 2005–2010 to 2011–2014 among participants with kidney damage or mildly reduced kidney function (CKD stages 1–2) and participants with moderately to severely reduced kidney function (CKD stages 3–4). During 2011–2014, 9.2% of people with CKD stages 3–4 used prescription NSAIDs, higher than people without CKD (5.0%) and people with CKD stages 1–2 (7.6%). Ibuprofen and naproxen were the two most often prescribed NSAIDs and represent approximately half of prescription NSAID use in participants with CKD stages 1–2 and one-third of prescription NSAID use in participants with CKD stages 3–4. Because information on over-the-counter NSAID use is not available in NHANES, these estimates are likely lower than the proportions of actual NSAID use. Continued awareness of NSAID use among people with CKD may assist both patients and providers in managing CKD and preventing kidney complications. See the CKD Surveillance website to find out more about use of prescribed NSAIDs in people with CKD. 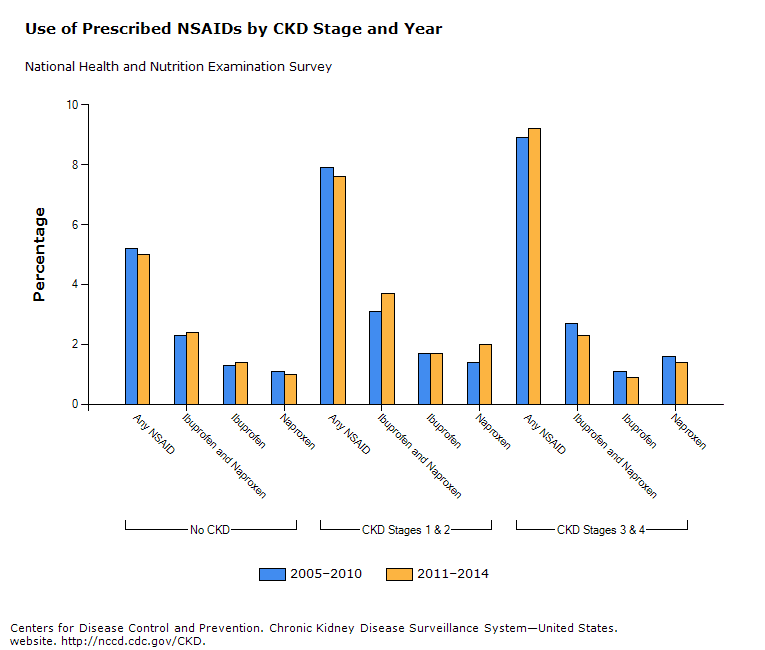 CKD: chronic kidney disease excluding kidney failure or end-stage renal disease; NSAIDs: nonsteroidal anti-inflammatory drugs
Note: Use of prescription NSAIDs is defined through the prescription medication questionnaire in the National Health and Nutrition Examination Survey. Participants are asked to report prescriptions they had taken in the past 30 days. By using Computer-Assisted Personal Interviewing system, the medication name entered by the trained interviewers is matched to the data collection drug database.
Publicado por salud equitativa en 13:05