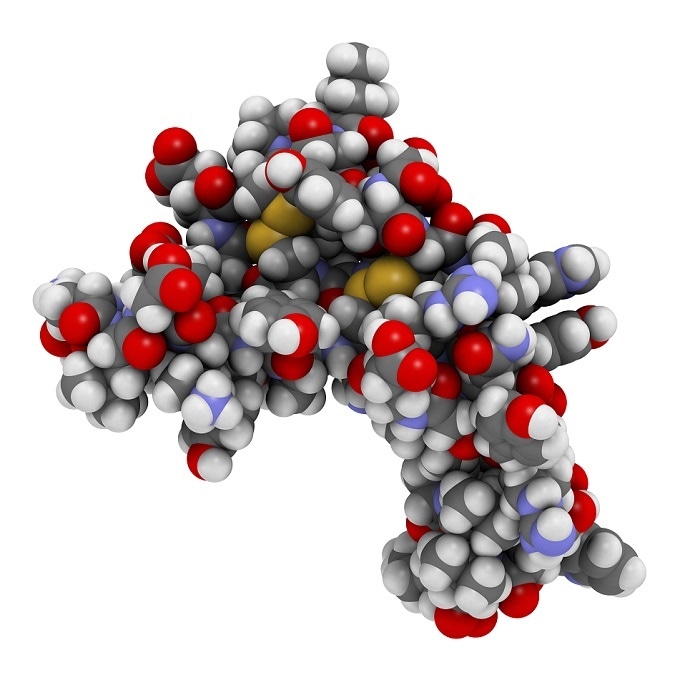 Credit: molekuul_be/Shutterstock.com
Obesity is a global health problem that increases the risk of diabetes, cardiovascular diseases, musculoskeletal disorders and some cancers. The number of obese individuals worldwide has tripled over the last four decades. Last year, it was estimated that 39% of the adult population were overweight and 13% were obese. Furthermore, there were over 340 million obese children and adolescents in 2016.
The significant increase in morbidity associated with increasing body mass index and the steadily increasing prevalence of obesity has prompted much research into treatments to help obese people lose weight. Currently, the most effective option is bariatric surgery, but this can have serious complications and long-lasting side effects.
Following the discovery that concentrations of GDF15, a natural regulator of body weight, were higher in obese mice, rats, and humans compared with age-matched lean controls, this protein has been at the centre of the search for an effective weight loss treatment. GDF15 has been shown to delay gastric emptying and change food preference to lower calorie options. The role of GDF15 in regulating body energy intake made it a prime candidate for developing a non-surgical treatment for obesity.

Initial investigations, however, were disappointing since the protein is very short-lived in the body, and so when introduced it did not persist long enough to have the desired effect.
The protein has now been fused with an antibody fragment so that it is not cleared from the body so quickly. When this fusion protein was injected into obese monkeys, they ate 40% less and lost 10% of their body weight in only 6 weeks. In addition, they were found to have improved metabolic profiles, making them less prone to developing diabetes.
Weight loss was also observed when the GDF15 fusion protein was administered to mice. The treated mice also chose to eat low calorie standard food over an extra-rich condensed-milk diet, whereas the untreated mice feasted on the high-calorie option.
GDF15 activates a population of nerve cells called AP neurons that play a key role in the gut-brain axis that determines the perception of hunger and consequently food intake.
Although no side effects were observed in the animals studies, clinical trials are needed to confirm that the treatment is effective and well tolerated in humans.
Source:
Publicado por salud equitativa en 8:59