Snapshots of Life: Neurons in a New Light 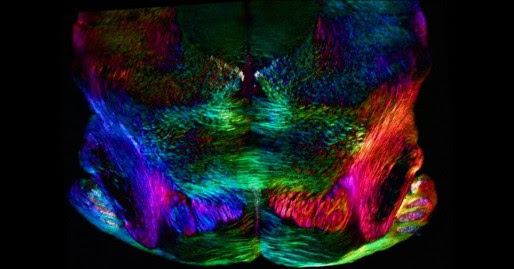 Birds do it, bees do it, and even educated fleas do it. No, not fall in love, as the late Ella Fitzgerald so famously sang. Birds and insects can see polarized light—that is, light waves transmitted in a single directional plane—in ways that provides them with a far more colorful and detailed view of the […]

Editor: Kendall Morgan, Ph.D.
If you have comments or questions not related to the current discussions, please direct them to olib@od.nih.gov
If you are looking for general information about the National Institutes of Health, or the 27 Institutes and Centers, please visit http://www.nih.gov/

Credit: Michael Shribak, Marine Biological Laboratory, Woods Hole, MA
Birds do it, bees do it, and even educated fleas do it. No, not fall in love, as the late Ella Fitzgerald so famously sang. Birds and insects can see polarized light—that is, light waves transmitted in a single directional plane—in ways that provides them with a far more colorful and detailed view of the world than is possible with the human eye.
Still, thanks to innovations in microscope technology, scientists have been able to tap into the power of polarized light vision to explore the inner workings of many complex biological systems, including the brain. In this image, researchers used a recently developed polarized light microscope to trace the spatial orientation of neurons in a thin section of the mouse midbrain. Neurons that stretch horizontally appear green, while those oriented at a 45-degree angle are pinkish-red and those at 225 degrees are purplish-blue. What’s amazing is that these colors don’t involve staining or tagging the cells with fluorescent markers: the colors are generated strictly from the light interacting with the physical orientation of each neuron.
How is this possible? It requires thinking a little differently about polarized light, which means getting into a bit of physics. A traditional polarized light microscope depends on the optical path difference between two polarization components of light to generate color. That is, as two beams of light pass through an object, they travel at different speeds, which throws them out of phase. If they recombine in a certain way, the waves generate color. But neurons and other cells are inherently weak optical structures, and that’s always made them appear a monochromatic gray under the microscope’s lens.
Enter Michael Shribak, an NIH grantee and researcher at Marine Biological Laboratory, Woods Hole, MA, who decided to exploit a different aspect of polarized light called interference. Here’s how it works: The microscope produces white light with a polarization angle proportional to the wavelength and sends it to the sample. The light waves recombine, or interfere, as they pass through the sample. Because different colors interfere at different angles—such as those created by the shape of the neurons—Shribak can generate a full spectrum of color from this otherwise monochromatic gray sample.
Shribak is already using the microscope, called a polychromatic polscope, in a range of studies [1]. He’s using it to investigate the pathology of cancer cells, suggesting it may hold potential as a high-resolution diagnostic tool. It can also be used to study disorders affecting blood cells, such as sickle cell disease and malaria.
Also, as you can see above, the microscope shows great promise as a mapping tool for neuroscientists. Not only does it image neurons at single-cell resolution, it shows how these cells interconnect. Such information is critical for learning more about how a normal brain works or about what might be going wrong with those interconnections during Alzheimer’s disease and other neurological conditions.
This striking image was among the entrants in the Biophysical Society’s 2017 Art of Science Image Contest. It’s also just one of more than 20 interesting images that Shribak has “on exhibit” on his lab page to show the capabilities of the polychromatic polscope and polarized light microscopy.
Reference:
[1] Polychromatic polarization microscope: bringing colors to a colorless world. Shribak M. Sci Rep. 2015 Nov 27;5:17340.
Links:
Laboratory of Michael Shribak (Marine Biological Laboratory, Woods Hole, MA)
Art of Science Image Contest (Biophysical Society, Rockville, MD)
NIH Support: National Institute of General Medical Sciences