We humans are wired to search for a causative agent when something bad happens. When someone develops cancer, we seek a reason. Maybe cancer runs in the family. Or perhaps the person smoked, never wore sunscreen, or drank too much alcohol. At some level, those are reasonable assumptions, as genes, lifestyle, and environment do play […] 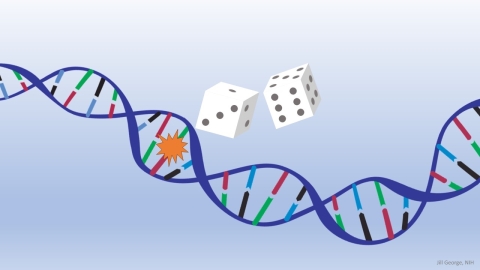 We humans are wired to search for a causative agent when something bad happens. When someone develops cancer, we seek a reason. Maybe cancer runs in the family. Or perhaps the person smoked, never wore sunscreen, or drank too much alcohol. At some level, those are reasonable assumptions, as genes, lifestyle, and environment do play important roles in cancer. But a new study claims that the reason why many people get cancer is simply just bad luck.
This bad luck occurs during the normal process of cell division that is essential to helping our bodies grow and remain healthy. Every time a cell divides, its 6 billion letters of DNA are copied, with a new copy going to each daughter cell. Typos inevitably occur during this duplication process, and the cell’s DNA proofreading mechanisms usually catch and correct these typos. However, every once in a while, a typo slips through—and if that misspelling happens to occur in certain key areas of the genome, it can drive a cell onto a pathway of uncontrolled growth that leads to cancer. In fact, according to a team of NIH-funded researchers, nearly two-thirds of DNA typos in human cancers arise in this random way.
The latest findings should help to reassure people being treated for many forms of cancer that they likely couldn’t have prevented their illness. They also serve as an important reminder that, in addition to working on better strategies for prevention, cancer researchers must continue to pursue innovative technologies for early detection and treatment.
Published in the journal Science, this new work comes from Cristian Tomasetti, Lu Li, and Bert Vogelstein of Johns Hopkins University School of Medicine, Baltimore [1]. The team based their findings on mathematical analyses that combined DNA sequencing data, obtained from thousands of tumors and normal tissue samples in The Cancer Genome Atlas, with epidemiological information from the Cancer Research UK, a health charity in the United Kingdom. The analyses allowed the researchers to estimate the proportion of DNA typos in 32 cancer types that could be attributed to heredity, environment, or random DNA copying errors.
Overall, their model indicated 66 percent of cancer mutations result from DNA copying errors. The rest were attributed to environment (29 percent), which includes lifestyle and behavioral factors, and inheritance (5 percent).
It’s important to note that the picture varies considerably among cancers types. Lung cancer, for instance, depends heavily on environmental factors, particularly the damaging effects of smoking. The researchers estimate that 65 percent of lung cancer mutations could be prevented. Still, 35 percent of lung cancer mutations apparently arise from random copying errors, which helps to explain why lung cancer sometimes develops in people who have never smoked.
In other cancers, including prostate, brain, bone, and most childhood cancers, random mutations are estimated to play an even more significant role. The analyses suggest more than 95 percent of mutations causing those forms of cancer occur randomly.
As further evidence for the importance of random copying errors in cancer, the researchers evaluated the incidence, or number of cases, of 17 cancer types from 69 countries around the globe in data collected by the International Agency for Research on Cancer in France. The researchers asked whether differences in the number of times stem cells divide could help to explain differences in the incidence of some common cancers.
In fact, Tomasetti and Vogelstein earlier found a strong correlation between cancer incidence and stem cell divisions in a paper published in 2015 [2]. However, that earlier analysis sparked considerable debate, in part because it lacked data on breast and prostate cancers, two common forms of the disease. It was also limited to people who lived in the United States. The new study, involving people of various nationalities who represented more than half of the world’s population, documents a strong relationship between cancer incidence and normal cell divisions in 17 cancer types, including breast and prostate cancers.
Of course, none of this should dissuade people from pursuing healthier habits to reduce their cancer risk. As the new results suggest, nearly a third of all cancer mutations arise from environmental factors that might be prevented. Because each of us faces the prospect of unavoidable, potentially cancer-causing DNA typos, it’s best to keep any additional errors to a minimum by not smoking, wearing sunscreen, watching your weight, and following other prevention measures.
At the same time, even people who do everything right can still find themselves facing a diagnosis of cancer. To win the battle against this disease, advances in prevention, early detection, and treatment will all be key.
References:
[1] Stem cell divisions, somatic mutations, cancer etiology, and cancer prevention. Tomasetti C, Li L, Vogelstein B. Science. 2017 Mar 24;355(6331):1330-1334.
[2] Cancer etiology. Variation in cancer risk among tissues can be explained by the number of stem cell divisions. Tomasetti C, Vogelstein B. Science. 2015 Jan 2;347(6217):78-81.
Links:
The Cancer Genome Atlas (NIH)
Bert Vogelstein (Johns Hopkins University School of Medicine, Baltimore)
Cristian Tomasetti (Johns Hopkins University School of Medicine, Baltimore)
NIH Support: National Cancer Institute