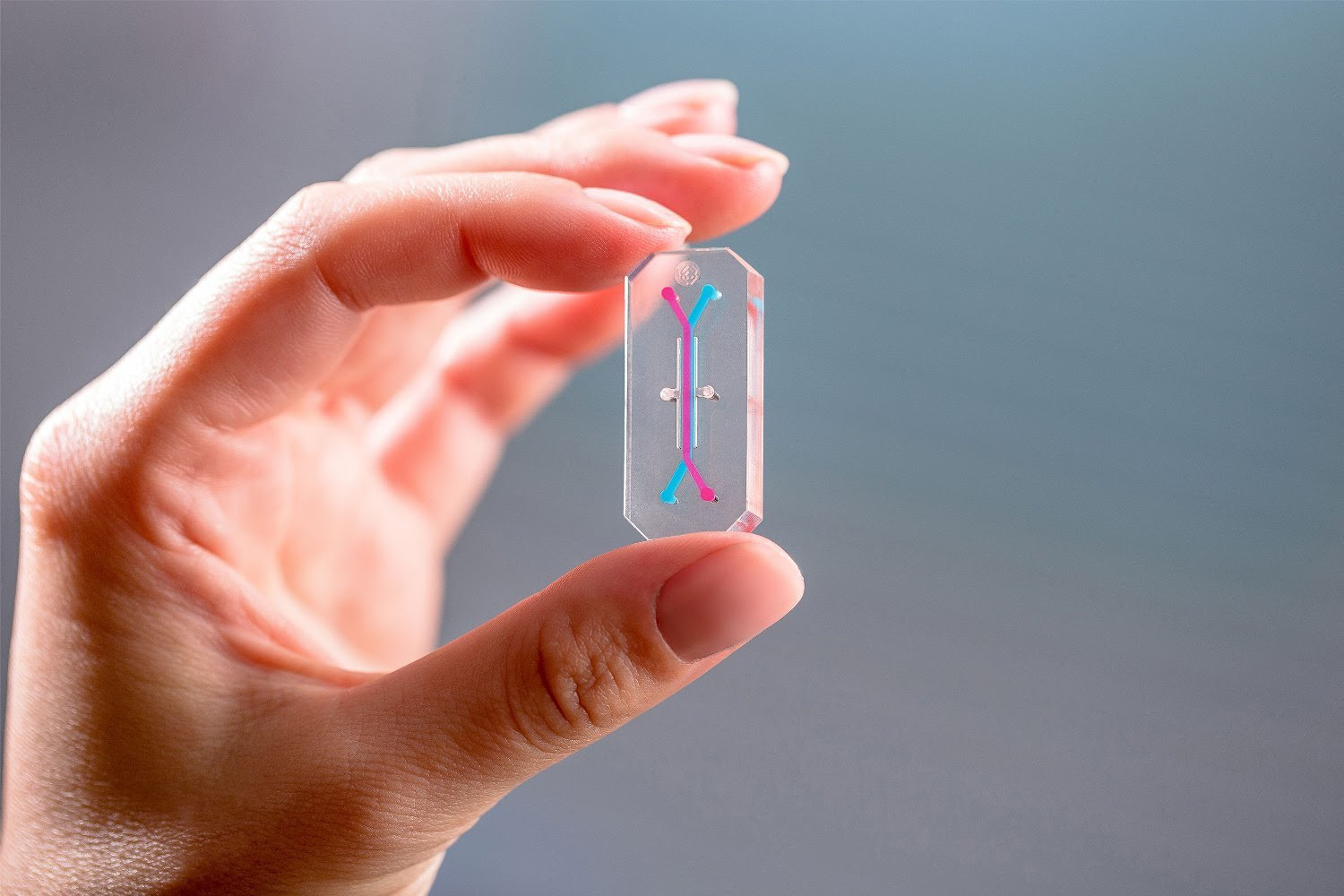 By: Suzanne Fitzpatrick, Ph.D.
There are many things you might envision putting on a chip. It’s unlikely that a human organ is one of them.

But creating human organ systems in miniature on micro-engineered chips about the size of a AA battery is a revolutionary testing technology that has captured the attention of food scientists at FDA. And FDA has a leading role in evaluating this science, designed to provide a more precise model for studying the effects of potentially harmful chemical and biological hazards in food, cosmetics or dietary supplements than is now available.
On April 11, 2017, FDA announced a multi-year research and development agreement with a company called Emulate Inc. to evaluate the company’s “Organs-on-Chips” technology in laboratories at the agency’s Center for Food Safety and Applied Nutrition, one of a number of FDA efforts to help evaluate this chip technology. The flexible polymer organ-chips contain tiny channels lined with living human cells and are capable of reproducing blood and air flow just as in the human body. The chips are translucent, giving researchers a window into the inner workings of the organ being studied.
Research will begin with a liver-chip but the agreement may expand in the future to cover additional organ-chips, including kidney, lung and intestine models. The ultimate goal is to predict how specific organs will respond to exposure to potential chemical hazards found in foods, cosmetics and/or dietary supplements with greater precision than other methods currently being used, such as cell-culture or animal-based tests.

Caption: Chip image courtesy of Emulate Inc.
Organs-on-chips have been the focus of a public-private collaboration between FDA, the federal Defense Advanced Research Projects Agency (DARPA) and the National Institutes of Health (NIH) since 2012. Millions of dollars in grants have been awarded to universities nationwide to advance this research, including Harvard University and the Massachusetts Institute of Technology. Emulate was founded by researchers at the Wyss Institute for Biologically Inspired Engineering at Harvard University.
The chips were first developed to evaluate the effectiveness of drugs but have come to be seen as a potentially useful technology in our efforts to ensure the safety of the foods and cosmetics we regulate. For example, they can be put to work to see how the body processes an ingredient in a dietary supplement or a chemical in a cosmetic and how a toxin or combination of toxins affects cells, information that ultimately can be used to help assess risks to human health.
In some ways, science is like a recipe in that both can go through a number of incarnations before they work. There’s a lot of experimenting and tweaking, collaborating and comparing. And that’s what we’ll be doing at FDA with the organs-on-chips research. Science is the foundation of FDA’s decisions but many people don’t realize how much scientific research is conducted by the agency. We’re excited to be at the forefront of this ground-breaking research, which may one day be routinely used to safeguard public health.
Wondering how this Organs-on-Chips technology works? Click here.
Suzanne Fitzpatrick, Ph.D., is the Senior Advisor for Toxicology in FDA’s Center for Food Safety and Applied Nutrition
Publicado por salud equitativa en 6:01