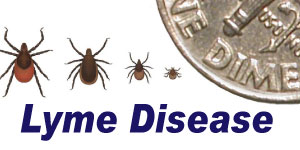 Lyme borreliosis is caused by various species of the bacterium Borrelia burgdorferi sensu lato, which is transmitted to humans through the bite of infected Ixodes ticks. These ticks are found in temperate forested regions of North America, Europe, and Asia, generally at elevations  less than 1300 meters.
Typical symptoms of Lyme borreliosis include fever, headache, fatigue, and a characteristic skin rash. If left untreated, infection can spread to joints, the heart, and the nervous system. Symptoms may vary depending on the specific type of Borrelia. In North America, the principal species is B. burgdorferi sensu strictu, which is particular likely to cause arthritis. In contrast, the European species B. garinii and B. afzelii are more often associated with neurological and chronic dermatologic manifestations, respectively.  Approximately 85,000 cases of Lyme disease are reported annually in Europe. In the United States, recent studies suggest that approximately 300,000 people are diagnosed with Lyme disease each year.
See below for links to a complete list of these articles.