If all your life, you have been functioning best in the evening and night, compared to the mornings, a gene mutation may be the cause.
In an article published in the journal Cell on April 6th, researchers from The Rockefeller University reported that a variant of the gene CRY1 slows down the function of the body clock—called the circadian clock—that regulates the sleep-wake cycle. The report says that people with Delayed Sleep Phase Disorder (DSPD) have a longer circadian cycle than most others, making them stay awake during the night. 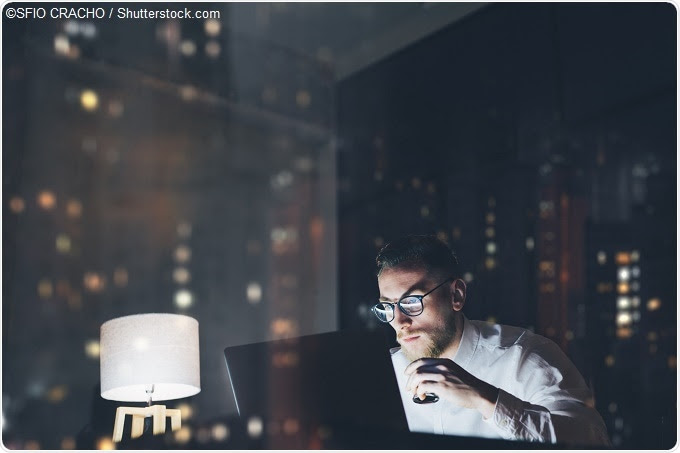 “Compared to other mutations that have been linked to sleep disorders in just single families worldwide, this is a fairly impactful genetic change,” said senior author Michael W. Young, the Richard and Jeanne Fisher Professor, and head of Rockefeller’s Laboratory of Genetics. The new study reveals that the mutation may be present in up to 1 in 75 people of certain populations.
The Centers for Disease Control and Prevention has reckoned that between 50 and 70 million adults in the US have DSPD—ranging from insomnia to narcolepsy—making them vulnerable to chronic conditions such as diabetes, obesity, and depression.
DSPD disrupts the sleep-wake cycle and make sufferers energetic for a longer time than other people. People who are often diagnosed with DSPD classify themselves as night owls.
Going late to sleep has its own drawbacks. Most people with DSPD find it difficult to wake up early to attend school or work in time. Their bodies do not cooperate and they are forced to wake up, which makes them feel tired and weak during the day and leads to sleeplessness during night.
Young’s lab has researched the internal body clock for more than 30 years, categorizing the number of genes involved in keeping flies, human beings, and other animals on a time schedule when it comes to eating and sleeping.
Young, along with research associate Alina Patke (the first and co-corresponding author of the new paper), worked in partnership with sleep researchers at Weill Cornell Medical College to discover whether mutation in any known circadian genes were associated with DSPD. The subjects completed a 14-day period of isolation during which eating and sleeping was permitted whenever they were inclined. Researchers also obtained skin biopsies from each subject.
Most individuals will follow, roughly, a 24-hour circadian rhythm when exposed to such a free-run setting.  One DSPD subject that stayed up late and had a cycle that was approximately half an hour longer caught the attention of the researchers. Several circadian abnormalities such as changes in body temperature and hormones, evening increase in serum melatonin (a sleep regulator) were also posponed.

Young said Melatonin levels started increasing around 9 or 10 pm in most people, whereas in the DSPD patient it did not happen until 2 or 3 am the next morning.
While examining the DNA of the DSPD patient, researchers noticed a variant in the CRY1 allele, a gene that had already been associated with the 24-hour rhythm.
A handful of genes turn on and off over a 24-hour cycle in a healthy body clock. The protein made by CRY1 is in charge of repressing some of these genes during certain components of the cycle. But Young and Patke revealed that the mutation recognized in the patient made the CRY1 protein more active than usual, keeping other clock genes switched off for a longer duration.
The researchers extended the study to other members of the patient’s family. It was discovered that five relatives shared the mutation in CRY1, and all of them had indications of DSPD or a track record of continual sleep problems.
Young’s team extended the study to large genetic databases across the world to decide the occurrence of CRY1 mutations. With a partner in Turkey, they first recognized CRY1 mutation in many families that are not related and in dozens of the Turkish population. After making contact with them and administering interviews and questionnaires, the researchers confirmed that 38 people reported aberrant sleep behavior, while unusual sleeping behaviors were not noticed in their relatives who did not have CRY1 mutation.
Lastly, after searching larger genetic databases for CRY1 mutations, Young’s group considered that as many as 1 in 75 people of non-Finnish European descent have at least one copy of the DSPD mutation. The mutation is dominant, which means that having just one copy of it can cause a sleep disorder.
The research group said that at present there is no proven benefit for those diagnosed with DSPD in being tested for CRY1 mutation. Patke mentioned that just finding the cause does not straight away fix the problem, however, based on this mechanism the development of drugs in the future is not inconceivable.
At the moment, many DSPD patients are managing their sleep-wake cycles by going to bed sooner than their body wants—adopting strict schedules.
“It’s a bit like cigarette smoking in that there are things we can do to help the problem before turning to drugs,” said Young. He also added that some patients seem to benefit by being exposed to strong light during the day.
The team already has future research planned to work out whether CRY1 mutations also affect the metabolism of people with DSPD, since the human circadian cycle that tells our bodies when to sleep, also regulates our hunger, metabolite and hormone levels.
Sources:
Publicado por salud equitativa en 9:04