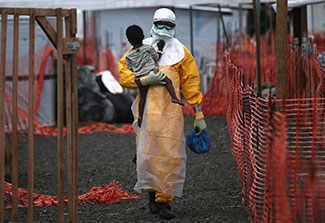 Photo by John Moore/Getty Images
Fogarty is strengthening research expertise in Ebola-affected
countries so future outbreaks can be contained.
“There's a very clear motivation for us to be actively developing capacity in low-income countries - and that is that we don't want Ebola or any other disease to come to the U.S. It's like seeing a raging fire across the street. Even if you say, ‘Why should I care what's happening to the people inside,’ the logical thing isn't to just stand in front of your door with a bucket of water; the logical thing is to protect yourself by helping to put the fire out."

When Ebola struck West Africa in 2014, countries with little or no scientific capacity suffered the most, and the cost of the U.S. response to help them soared above $2 billion. A new Fogarty program is aimed at strengthening scientific expertise at institutions in Guinea, Liberia and Sierra Leone so that when the next outbreak comes, they will be prepared to rapidly respond. The goal is for U.S. scientists to partner with their African counterparts to plan research training programs that would enable quick implementation of therapeutic or vaccine trials when the next infectious disease threatens.
Most of the nearly 29,000 confirmed infections and more than 11,000 deaths from Ebola in the 2014-16 West Africa outbreak occurred in Guinea, Liberia and Sierra Leone. All three countries bear the scars of war and grinding poverty, and were unprepared to try to stop the deadly march of Ebola. Fogarty planning grants are intended to allow grantee organizations to assess what gaps need to be filled and develop research training plans so the countries can compete for larger, long-term Fogarty funding to implement the programs. The grants awarded to Duke, Tulane, Vanderbilt and Yale universities in the U.S. are a vital first step to enabling the Ebola-affected countries in West Africa to develop the scientific capacity to lead the fight against the next infectious disease outbreak that will inevitably hit the region.
"If we want to make the world, including the U.S., a better and safer place, the only way to do it is to help low-resource countries become autonomous in their responses to disease outbreaks," said Dr. Daniel Bausch, principal investigator on Tulane's grant. "Otherwise, every time there's a health crisis, we'll find ourselves in a situation where there needs to be a massive, extremely costly external response like we had for Ebola in West Africa."
The U.S. was the top donor to the international Ebola response, allocating about $2.37 billion, according to data compiled by the CDC. "Instead of spending billions of dollars responding to the outbreak, we could have spent millions to develop capacity in Sierra Leone, Guinea and Liberia, which the Ebola-affected countries could have used to limit the spread of the disease," Bausch said.

In the first six months since the Fogarty awards were made, grantees have identified the resources that already exist in the West African countries, and those that are lacking. Working with partner institutions on the ground, the scientists have mapped out programs to develop and build local expertise in epidemiology, emerging epidemic virus research, the conduct of clinical trials and laboratory work, the use of transmission modeling to better predict the trajectory of an epidemic, biosecurity regulations, bioethics, data analysis and management, the capacity to apply and share the results of research, and more.
Helping countries in West Africa to help themselves would ensure that Americans remain protected from deadly infectious diseases like Ebola, said Bausch, who has worked on capacity-building in the region since 1996.
"Even if you say, 'OK, Africa or anywhere else outside the U.S. isn't my problem,' there's a very clear motivation for us to be actively developing capacity in low-income countries - and that is that we don't want Ebola or any other disease to come to the U.S.," he said. "It's like seeing a raging fire across the street. Even if you say, ‘Why should I care what's happening to the people inside,' the logical thing isn't to just stand in front of your door with a bucket of water; the logical thing is to protect yourself by helping to put the fire out."

By supporting programs that provide long-term training to people in low-income countries, Fogarty has helped the United States put out health emergency ‘fires' like Ebola, said Dr. Chris Woods, one of the principal investigators for Duke University. Woods and his team are working to identify clinical research training opportunities at Sierra Leone's main medical school, the College of Medicine and Allied Health Sciences (COMAHS), that would benefit from Duke's support, experience and resources. In the long run, the right skill set would enable local scientists to rapidly implement therapeutic or vaccine trials in the early stages of an outbreak, Woods said.
“Fogarty grants are the catalyst to start developing local investigators and support staff who can identify when new outbreaks happen, when new pathogens occur. Eventually, this will make it possible to have trained personnel in place, which means we would be able to respond not at the tail-end of an outbreak, as was the case with Ebola in West Africa, but on the front-end,” he said. “But you can’t achieve that by sending a whole bunch of folks to one-week classes and then patting yourself on the back. You need to support long-term research and that’s what Fogarty is giving us the opportunity to do.”
Slowly but steadily building sustainable capacity, the way Fogarty-backed programs do, "may not be as sexy or obvious as the rapid response team that comes in to a country once an outbreak is underway," said Bausch, "But it develops the response in the trenches, and that's the most important thing we can do in these countries. We need to build the capacity of Sierra Leoneans, Liberians and Guineans to be their own experts and not be dependent on the outside."

Training to conduct research in the midst of an epidemic 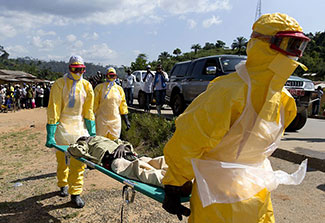 Photo by Kenzo Tribouillard/AFP-Getty Image
The U.S. spent more than $2 billion on the Ebola response
but investing in training to develop scientific skills in West
Africa costs much less.
The Ebola outbreak flew under the radar for months before it was declared an international public health emergency by the WHO in August 2014 - half a year after it began. At the time, Dr. John Schieffelin was working in the Sierra Leonean town of Kenema, near the border with Guinea. He recalled how, in the absence of trained local scientists and a lack of local knowledge on diagnosing and treating Ebola patients, he and a small team were overwhelmed with patients pouring into the town's hospital.
"There was a complete breakdown of the healthcare system - I don't know what else to call it," said Schieffelin, who is a co-lead on Vanderbilt's planning grant. "The local health care workers - the ones that were still alive - were petrified to come to work. Three of us were caring for 100 patients a day with, maybe, two or three nurses. It was total chaos in Kenema, and on a national scale, the medical and public health community didn't have the training to address Ebola at all."
Vanderbilt University is using its planning grant to prepare a proposal for long-term training in Sierra Leone, focused on advancing implementation science research capacity at COMAHS and building expertise on how to conduct high-level clinical trial research during an epidemic.

In Liberia, the health care system also all but collapsed. "The lack of scientific training in Liberia was a contributing factor to the havoc that was wreaked on our country during the Ebola crisis," said Dr. Mosoka Fallah, a professor at the University of Liberia (UL), and a principal investigator on the Yale University grant. "When you compare our inability in Liberia to rapidly detect Ebola with Mali's success in doing so, the urgency of preparing local scientists to lead the fight against the next epidemic becomes clear." 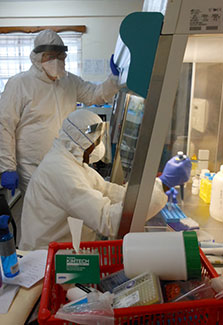 Photo courtesy of Tulane University
U.S. scientists are training local
researchers in Sierra Leone to strengthen
their ability to respond to the next
pandemic.
Mali has worked with the NIH for decades, while collaboration with Liberia only began in earnest during the Ebola outbreak. Malian health officials reported eight cases of Ebola and six deaths from the disease, compared to more than 10,600 cases and 4,800 deaths in Liberia.
Yale and UL are working together to harness the increased interest in public health research and practice in post-Ebola Liberia, and develop a training program that will build local expertise in epidemiology and outbreak management, including through predictive transmission modeling. Fallah's co-lead investigator, Dr. Alison Galvani, calls modeling "a relatively cost-effective methodology that informs efficient allocation of limited resources."
A rapid response In Nigeria, where Fogarty has invested for decades in research training and provided scholarships and fellowships to local students, allowed Ebola to be nipped in the bud there within weeks of the first case being diagnosed. Twenty cases were confirmed in Nigeria - Africa's most populous nation - and 8 people died. Mali and Nigeria "have a much better trained and organized public health system and workforce than Guinea, Liberia and Sierra Leone," said Schieffelin. "As a result, Mali and Nigeria were able to mount much better responses and get a foothold on controlling Ebola, while the three countries with weak health infrastructures were limping along."
"We need to plan and do training at a high level, for the people who are going to be running the show the next time around," said Schieffelin, who twice returned to Sierra Leone after August 2014, when Ebola was still raging in the region and outside help was just beginning to come in.
Even though the three countries in West Africa have all been declared Ebola-free, Sierra Leone, Liberia and Guinea "still don't have the experience or expertise to be able to manage a problem of this magnitude," said Schieffelin.
"We need to invest in further training in those countries because they're just not ready yet," he said. "The medical community isn't ready yet to take the lead, to run the public health response, to manage all the research initiatives. We need to continue working with Fogarty to train locals and bring them up to a level where they can contain their own epidemics so they don't become pandemics."