Energy Drinks May Give the Heart an Unhealthy Jolt: MedlinePlus Health News

Energy Drinks May Give the Heart an Unhealthy Jolt: MedlinePlus Health News

Energy Drinks May Give the Heart an Unhealthy Jolt 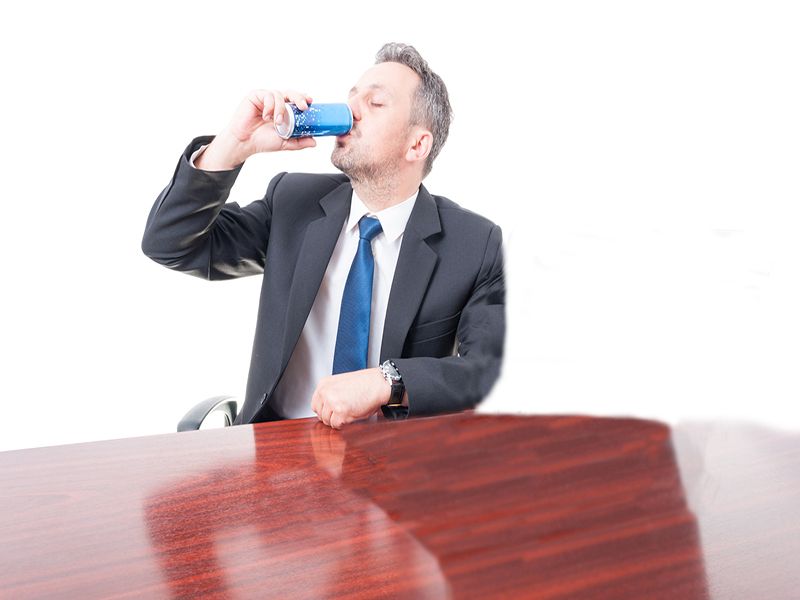 WEDNESDAY, April 26, 2017 (HealthDay News) -- The surge from energy drinks can cause unhealthy changes in your heart rhythm and blood pressure that don't occur with other caffeinated beverages, a small new trial suggests.
The blend of caffeine, sugar and herbal stimulants contained in energy drinks may causes changes in the heart's electrical system that can promote an abnormal and potentially dangerous heart rhythm, the researchers found.
Energy drinks may also create a longer-lasting increase in a person's blood pressure, compared to caffeine, the trial results suggest.
"Consumers should be aware that drinking an energy drink is not the same as drinking coffee or soda. There are differences," said lead researcher Emily Fletcher. She's a deputy pharmacy flight commander from David Grant U.S.A.F. Medical Center at Travis Air Force Base in California.
"I would recommend only moderate consumption of energy drinks, and particular avoidance in people with underlying cardiac disease or hypertension, or during activities that would also increase your blood pressure and heart rate, such as exercise or sports," Fletcher continued.
But, not everyone was on-board with the study authors' conclusions.
Dr. Gordon Tomaselli, a spokesman for the American Heart Association, pointed out that the study had few participants, and he believes energy drinks are probably fine for healthy adults.
The study included 18 healthy volunteers at a U.S. air base who were between ages 18 and 40. The military decided to investigate the effects of these drinks because three-quarters of base personnel have consumed an energy drink and about 15 percent drink three cans a day when deployed, Fletcher said.
The volunteers were split into two groups. Half were asked to drink 32 ounces of an off-the-shelf energy drink that contained 108 grams of sugar, 320 milligrams of caffeine, and various herbal ingredients. The other half were given a control drink containing 320 milligrams of caffeine, 40 milliliters of lime juice and 140 milliliters of cherry syrup in carbonated water.
Researchers then monitored their heart activity and their blood pressure for up to six hours after consuming the drink, as well as a follow-up examination the next day.
Other than the caffeine, none of the other ingredients in the control drink were expected to have any effect on heart rhythm or blood pressure, the researchers said.
Six days after the initial round, the two groups switched drinks and the effects were again studied.
Electrocardiograms revealed that energy drinks caused a 10-millisecond increase in the heart's corrected QT interval -- the time it takes the lower chambers of the heart to repolarize and prepare to generate another heart beat.
"If this time interval, which is measured in milliseconds, is either too short or too long, it can cause the heart to beat abnormally," Fletcher said. This abnormal heart rhythm can be life-threatening, increasing the risk of heart attack or stroke.
To put the 10-millisecond difference in perspective, drugs that affect the corrected QT interval by 6 milliseconds carry warnings about the effect on their product labels, Fletcher said.
Both the energy drink and the caffeinated control drink caused a similar increase in blood pressure, but after six hours the blood pressure in the control group had nearly returned to normal while that of the energy drink group remained mildly elevated.
"Prolonged high blood pressure does put you at higher risk for heart disease and stroke," Fletcher said. "One in three Americans has hypertension. That's one-third of our population that would be adding to their problem if they consumed energy drinks."
The U.S. Food and Drug Administration generally considers caffeine in doses of less than 400 milligrams as safe, but energy drinks often combine caffeine with proprietary energy blends, the researchers noted.
But Tomaselli, who's also the chief of the Johns Hopkins Division of Cardiology in Baltimore, noted that the changes detailed by researchers were relatively small.
"I'm not so convinced this study has gone a long way in proving" definitively that energy drinks are harmful to the heart, he said.
People with heart problems are told to avoid these drinks, but most young and healthy people should be able to take them safely, he said.
"You will see cardiovascular effects from these drinks, but the likelihood of having a major adverse cardiac event is much more likely in someone who is predisposed," Tomaselli said. "The thing you worry about are the rare cases where young people have a susceptibility that you have no idea they have."
In general, however, Tomaselli believes folks can increase their energy through other, safer means.
"I'd say, try to get better sleep and try to exercise if you need more pep, rather than trying to add a stimulant," Tomaselli said. "I'd also recommend trying coffee rather than an energy drink."
The clinical trial was published April 26 in the Journal of the American Heart Association.
SOURCES: Emily Fletcher, Pharm.D., deputy pharmacy flight commander, David Grant U.S.A.F. Medical Center, Travis Air Force Base, Calif.; Gordon Tomaselli, M.D., chief, cardiology, Johns Hopkins Medicine, Baltimore; April 26, 2017, Journal of the American Heart Association
HealthDay
Copyright (c) 2017 HealthDay. All rights reserved.
News stories are written and provided by HealthDay and do not reflect federal policy, the views of MedlinePlus, the National Library of Medicine, the National Institutes of Health, or the U.S. Department of Health and Human Services.