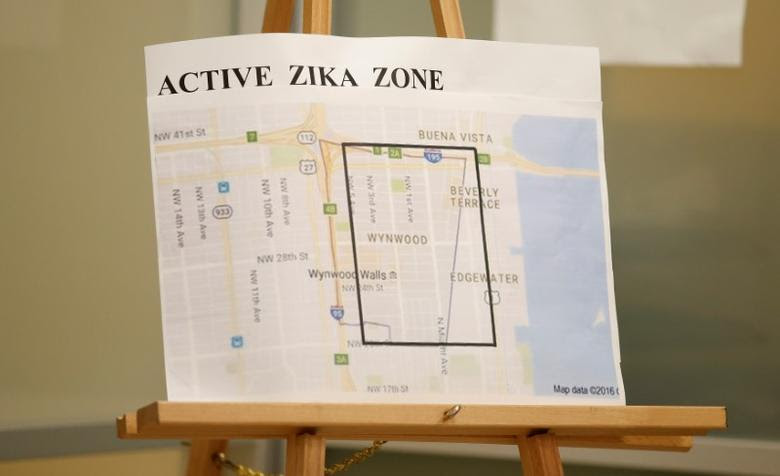 A map showing the active Zika zone is on display at the Borinquen Health Care Center in Miami, Florida, U.S. on August 9, 2016. REUTERS/Chris Keane/File Photo


By Julie Steenhuysen
Local transmission of the Zika virus in Florida may have occurred as early as June 15 of last year and likely infected people who lived not only in Miami-Dade County, but in two nearby counties, U.S. health officials said on Monday.
The warning means that some men who donated semen to sperm banks in the area may not have been aware that they were at risk of infection, and may have donated sperm infected with the Zika virus, officials from the U.S. Centers for Disease Control and Prevention and the Food and Drug Administration told reporters in a telephone briefing.
The information is concerning because Zika has been shown to cause birth defects in women who become infected while pregnant. Previously, the CDC had warned of the risk of Zika in Miami-Dade County, beginning on July 29.
But the new warning dials that risk back to June 15, and adds in both Broward and Palm Beach Counties, home to the major tourist destinations of Fort Lauderdale and Palm Beach.
Zika's arrival in Florida last summer followed the rapid spread of the mosquito-borne virus through Latin America and the Caribbean.
The World Health Organization last year declared Zika a global health emergency because of its link in Brazil with thousands cases of the birth defect microcephaly, which is marked by small head size and underdeveloped brains that can result in severe developmental problems.
U.S. officials said because of frequent travel between the three Florida counties, some women may have been infected and not been aware of it, either through contracting the infection directly from a mosquito bite while visiting Miami-Dade or through sex with an infected partner who had.
And because Zika has been shown to last up to three months in semen, it may mean some men living in the affected counties may have donated sperm without reporting they were at risk.
CDC Zika expert Dr. Denise Jamieson said the risk applies "particularly (to) women who became pregnant or are planning to become pregnant through the use of donor semen." She urged these women to "consult their healthcare provider to discuss the donation source and whether Zika virus testing is indicated."
The new warning came to light through investigations of several cases of Zika reported by the Florida Health Department late last year that suggested residents of Palm Beach or Broward counties may have become infected while traveling back and forth from Miami-Dade. According to the CDC, a total of 215 people are believed to have contracted Zika in Florida last year through the bite of a local mosquito. But since only one in five people infected with Zika become ill, experts believe the actual number was higher.

Officials said they weren't aware of any women who contracted Zika from infected semen donated to one of the 12 sperm banks in the three-county area. There is no approved test for Zika in sperm.
Jamieson said the CDC does not have any new evidence of local Zika transmission, but said it may occur again in the coming year, adding that the CDC was "on the lookout for additional cases of Zika."
A recent CDC study estimates that Zika infections cause a twenty-fold spike in the risk of certain birth defects, including microcephaly.