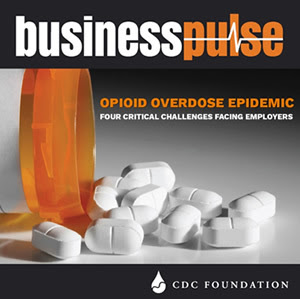 March 15, 2017: CDC Foundation launched an online resource, the “Opioid Overdose Epidemic,” intended to help employers reduce the negative impact of opioids on their workforce. The interactive infographic addresses lost workforce productivity due to opioids, the increased cost of opioid abuse and overdose as a result of healthcare and substance abuse treatment, and other challenges businesses face and how they can develop policies and programs to protect their employees. Also included are resources and an interview with Deb Houry, M.D., M.P.H., director of CDC’s Injury Center, and Mike Menkhaus, R.Ph., Enterprise Pharmacy Retail System project manager, The Kroger Co. The CDC Foundation is a nonprofit entity that advances the mission of CDC through public-private partnerships that protect the health, safety and security of our nation.

A promising strategy for addressing the U.S. opioid overdose epidemic is improving the use of prescription drug monitoring programs (PDMPs). The Substance Abuse and Mental Health Services Administration (SAMHSA) funded nine states to better integrate PDMP data into health systems and to initiate and increase interstate data sharing. The project was called PDMP Electronic Health Records (EHRs) Integration and Interoperability Expansion (PEHRIIE) and funded Florida, Illinois, Indiana, Kansas, Maine, Ohio, Texas, Washington, and West Virginia from 2012 to 2016. CDC conducted a process and outcome evaluation of the program; and in collaboration with Brandeis University, used a comparative case study to describe the implementation process, identify successes and challenges, and explore the program’s effects on the stated goals.

American Journal of Public Health: Recent Increases in Cocaine-Related Overdose Deaths and the Role of Opioids

Research has shown that cocaine use disorder was a significant risk factor for both heroin and prescription opioid use disorder. A recent article published in the American Journal of Public Health examines the role of opioids in the trend of cocaine overdose deaths from 2000 to 2015. Namely, the study shows how increased use of heroin and synthetic opioids is associated with the recent increases in cocaine overdose deaths. Key findings include:

Other articles and resources of interest: