Posted October 6, 2016 2:45PM ET
These outbreak investigations are over. However, people can still get a
Salmonella infection from live poultry, including those in backyard flocks.
Read more information about Salmonella from live poultry and how people
can reduce the chance they or their children will get an infection. 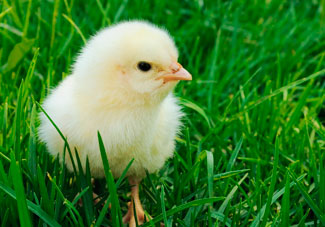 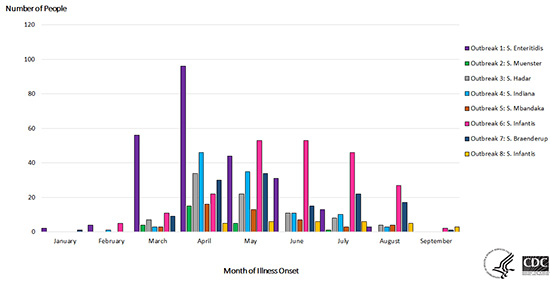 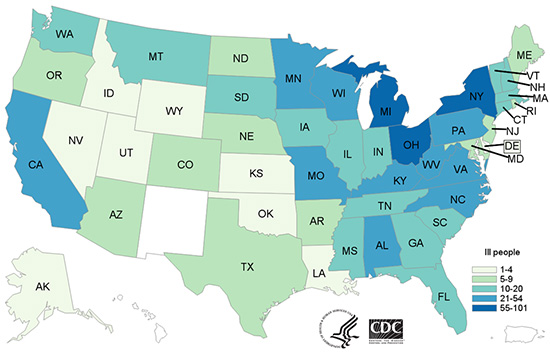 As of September 26, 2016, 895 people infected with the outbreak strains of Salmonella were reported from 48 states. A list of states and the number of cases in each can be found on the Case Count Map page.
Among people for whom information is available, illnesses started on dates ranging from January 4, 2016 to September 10, 2016. Ill people ranged in age from less than 1 year to 106, with a median age of 27. Of ill people, 52% were female. Among 761 ill people with available information, 209 (27%) reported being hospitalized, and three deaths were reported. Salmonella was considered to be a cause of death for one person in Mississippi. Although the two people who died in Kentucky and New Jersey had a Salmonella infection, the infection was not considered to be a cause of death.

Investigation of the Outbreak

Epidemiologic, traceback, and laboratory findings linked the eight outbreaks to contact with live poultry, such as chicks and ducklings, from multiple hatcheries.
In interviews, ill people answered questions about contact with animals and foods consumed during the week before becoming ill. Contact with live poultry (chicks, chickens, ducks, ducklings) in the week before becoming ill was reported by 552 of 745 ill people interviewed, or 74%.
Ill people reported purchasing live baby poultry from several suppliers, including feed supply stores, Internet sites, hatcheries, and friends in multiple states. Ill people reported purchasing live poultry to produce eggs, learn about agriculture, have as a hobby, enjoy for fun, keep as pets, or to give as Easter gifts. Some of the places ill people reported contact with live poultry included their home, someone else’s home, work, or school settings.
Public health officials collected samples from live poultry and the environments where the poultry live and roam from the homes of ill people in several states or at locations of purchase in several states. Laboratory testing isolated five of the outbreak strains of Salmonella.
More information about each outbreak is available in the outbreak summaries below.