New Use for Lenalidomide in Multiple Myeloma - National Cancer Institute

New Use for Lenalidomide in Multiple Myeloma - National Cancer Institute 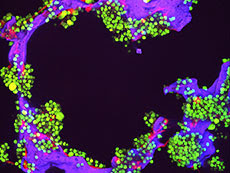 The FDA has approved lenalidomide for use as a maintenance therapy in patients with multiple myeloma who have undergone an autologous stem cell transplant, to help keep the cancer from coming back.

FDA Approves New Use for Lenalidomide in Multiple Myeloma

March 16, 2017, by NCI Staff
On February 22, the Food and Drug Administration (FDA) approved a new use for the drug lenalidomide (Revlimid®) in treating patients with multiple myeloma.
Under the new approval, patients with multiple myeloma can receive lenalidomide as maintenance therapy after receiving an autologous stem cell transplant for the disease, to help keep the cancer from coming back.
Lenalidomide, a somewhat less toxic and more potent version of the drug thalidomide, was first approved by the FDA in 2006 for use in combination with dexamethasone as a treatment for multiple myeloma in patients who have received at least one other prior therapy.
In 2015 lenalidomide was also approved for use in combination with dexamethasone in patients with newly diagnosed multiple myeloma who are not eligible for an autologous stem cell transplant. Lenalidomide is also approved to treat some patients with mantle cell lymphoma and myelodysplastic syndromes.
The new FDA approval “catches up with clinical practice…in that most [oncologists] are already providing lenalidomide as maintenance therapy after autologous stem cell therapy,” said Carol Ann Huff, M.D., of the Johns Hopkins Sidney Kimmel Comprehensive Cancer Center. It also “provides further confirmation that maintenance therapy with lenalidomide is effective,” and should help ensure that it’s covered by health insurance, she continued.

The new approval for lenalidomide was based on two randomized double-blind trials that showed significantly longer progression-free survival in patients with multiple myeloma who received a daily dose of the drug after autologous stem cell transplantation compared with that in patients who received a placebo.
Both trials—the NCI-funded CALGB 100104 trialExit Disclaimer and a European trial called IFM 2005-02Exit Disclaimer—randomly assigned patients who had stable disease after undergoing autologous stem cell transplantation to receive daily oral lenalidomide or placebo.
Results from both trials, published in the same issue of the New England Journal of Medicine in 2012, showed an improvement in progression-free survival duration of about 20 months (19 months in the CALGB trial and 18 months in the IFM trial) for patients who received lenalidomide compared with those who received placebo.
Both trials were unblinded early (that is, the patients and the doctors learned who was on lenalidomide and who was on placebo), after interim analyses showed that lenalidomide maintenance significantly improves progression-free survival. Patients in the CALGB trial who were receiving placebo when the study was unblinded in 2009 and who did not have progressive disease were given the option of “crossing over” to receive lenalidomide as maintenance therapy, and 86 of 128 patients did so.
Patients in the IFM trial continued to receive the treatment they were originally assigned. The IFM trial was halted in January 2011, however, after an increased risk of second primary cancers  in patients on lenalidomide emerged. The CALGB trial continued despite a similar observation. Researchers are continuing to follow patients in both trials.
Dr. Huff, who was not involved in either trial, noted that the extended follow-up after crossover in the CALGB trial also showed a substantial increase in median  overall survival  with lenalidomide maintenance therapy.
In addition, a meta-analysis of resultsExit Disclaimer from the CALBG and IFM trials and the results of a third clinical trialExit Disclaimer of maintenance lenalidomide reinforced the finding of improved overall survival from the CALGB trial, explained Richard Little, M.D., of NCI’s Division of Cancer Treatment and Diagnosis, which sponsored the CALGB trial.
“The important finding from the clinical trials work is that lenalidomide maintenance therapy, given until disease progression following autologous transplant, provides a survival benefit,” Dr. Little said. “This provides definitive evidence for practice [and] shows that only immediate maintenance therapy leads to improved survival.”

The types, frequencies, and severity of adverse side effects seen in the two trials were similar to those previously reported for lenalidomide, and included neutropenia, abnormally low platelet levels, and increased risks of deep-vein thrombosis and pulmonary embolism.
In addition, at a median follow-up of more than 7 years, the total incidence of new blood cancers and new solid tumor second primary cancers (excluding squamous cell carcinoma and basal cell carcinoma) in the two trials combined was 14.9% for patients receiving lenalidomide and 8.8% for patients receiving placebo, based on the trial data reported to the FDA.
But because multiple myeloma is such a serious disease, Dr. Huff noted, “the risk of dying from myeloma, in most [experts’] opinions, far exceeds the risk of the second cancers.” However, she added, “that is certainly a discussion that we have with our patients” when considering potential risks and benefits of lenalidomide treatment.
“A decade ago the average survival [for people with multiple myeloma] was in the 3- to 5-year range, and now it’s in the 7- to 10-year range,” thanks to various advances in treatment, Dr. Huff continued.

Other Potential Maintenance Therapies in the Wings

Many questions remain about post-transplant maintenance therapy for multiple myeloma patients, Dr. Huff said. At least two other drugs are being tested in combination with lenalidomide as maintenance therapy in large clinical trials, she continued, the proteasome inhibitor bortezomib (Velcade®) and a second-generation proteasome inhibitor, ixazomib (Ninlaro®).
“No one knows exactly how long to give these agents and whether we can mitigate some of the risk of second primary cancers and other side effects by shortening the duration of treatment,” she said. “Can we be wiser about how we give lenalidomide? Are there patients who benefit more or less from maintenance therapy with this drug? Are there better maintenance strategies for some patients than for others?”
For now, lenalidomide is the only FDA-approved maintenance therapy for multiple myeloma patients following autologous stem cell transplant. “This is by no means the only option, [but] this is the option with the most robust data available,” Dr. Huff said.
Publicado por salud equitativa en 7:51