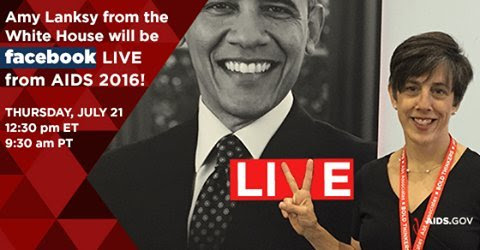 As the third full day of the 2016 International AIDS Conference (AIDS 2016) came to a close in Durban, South Africa, we had an opportunity to speak with Dr. Amy Lansky, Director of the White House Office of National AIDS Policy (ONAP), via Facebook Live. [READ MORE]

came to a close in Durban, South Africa, we had an opportunity to speak with Dr. Amy Lansky, Director of theWhite House Office of National AIDS Policy (ONAP), via Facebook Live.
In a conversation with her friend Dr. Patrick Sullivan of Emory University, they reflected on their experiences at prior International AIDS Conferences and the changes those gatherings have helped bring about. Drs. Lansky and Sullivan also discussed some of the experiences from the 2016 conference that stood out. These included the commonality of issues confronting in the U.S. and many other countries around the globe, such as the importance of focusing our response to HIV on key populations, addressing the epidemic among youth, and swiftly moving science into practice. Dr. Lansky observed that many sessions had also reinforced that efforts prioritized by the U.S. National HIV/AIDS Strategy are also prioritized in other countries’ responses: getting more people to know their HIV status, linkage to and retention in HIV care for those diagnosed and delivery of prevention services – including PrEP – for those who test negative, and focusing resources on the populations and geographies consistent with the burden of the disease.
In case you missed it, you can view their conversation video here

, you can also view other Facebook Live conversations that we had from AIDS 2016 with U.S. government officials who shared information about the science being presented at the conference and its implications for domestic and international programs.
Related posts:
Publicado por salud equitativa en 7:33