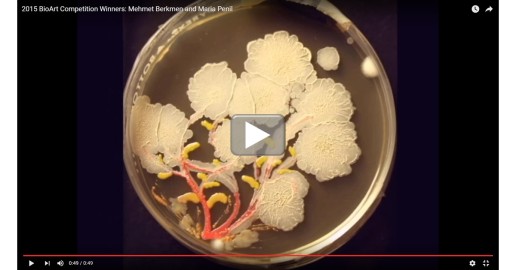 As long as researchers have been growing bacteria on Petri dishes using a jelly-like growth medium called agar, they have been struck by the interesting colors and growth patterns that microbes can produce from one experiment to the next. In the 1920s, Sir Alexander Fleming, the Scottish biologist who discovered penicillin, was so taken by this phenomenon that he developed his own palette of bacterial “paints” that he used in his spare time to create colorful pictures of houses, ballerinas, and other figures on the agar [1].
Fleming’s enthusiasm for agar art lives on among the current generation of microbiologists. In this short video, the agar (yellow) is seeded with bacterial colonies and, through the magic of time-lapse photography, you can see the growth of the colonies into what appears to be a lovely bouquet of delicate flowers. This piece of living art, developing naturally by bacterial colony expansion over the course of a week or two, features members of three bacterial genera: Serratia (red), Bacillus (white), and Nesterenkonia (light yellow).
This video, which is among the winners in the Federation of American Societies for Experimental Biology’s 2015 BioArt competition, is the collaborative effort of Mehmet Berkmen, an NIH-supported scientist at New England BioLabs, Inc., Ipswich, MA, and artist Maria Peñil of Beverly, MA. The two met by chance about five years ago at a local eatery, and Berkmen introduced Peñil to the creative possibilities of agar art. An accomplished engraver, photographer, and sculptor, Peñil liked what she saw and began volunteering in Berkmen’s lab to learn how to culture bacteria and master this microbial medium with its variability in growth rates, color, and texture.
Because agar tends to dry out quickly, the team’s greatest technical hurdle has been keeping the plate moist so that the art could develop over many days. The big breakthrough came a few years ago when Berkman and colleagues customized a two-tiered chamber to house the agar plates. The chamber, which is equipped with a humidifier, humidistat, and locks in the temperature at 30 C, is connected to a camera that is programmed to snap a photo of the agar plate every 10 minutes.
While recent research interest in the microbiome has certainly increased awareness of our symbiotic and often beneficial relationship with bacteria, Berkman finds most people still just think of bacteria as infection-causing germs. He credits Peñil with taking agar art to a higher artistic level and giving the public a positive view of bacteria.
The pair is now interested in exhibiting the lab’s growing portfolio of living art at natural history museums across the nation. Among their gems is the portrait “Neurons,” the winner of the American Society for Microbiology’s (ASM) 2015 Agar Art Contest, and the portrait “Cell to Cell,” which won the contest’s People’s Choice Award. If you want to have a look at those works, check out the link below! Or, you can keep an eye out for the ASM’s 2016 Agar Art Contest. The deadline for entries is Friday, May 6, and the winners will be announced in June.
Reference:
Fleming’s Germ Art, Dunn R. Smithsonian Magazine, July 11, 2010.
Links:
New England BioLabs, Inc. (Ipswich, MA)
Announcing the 2015 ASM Agar Art Winners (American Society for Microbiology, Washington, D.C.)
BioArt (Federation of American Societies for Experimental Biology, Bethesda, MD)
2015 BioArt Exhibit, NIH Visitor Center and Nobel Laureate Exhibit Hall
NIH Support: National Institute of Allergy and Infectious Diseases