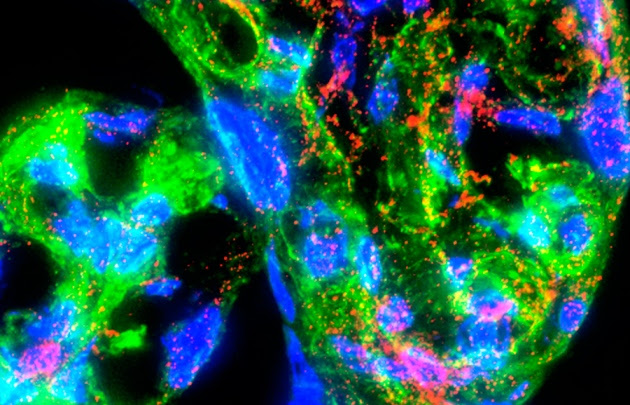 R. Bick, B. Poindexter, UT Medical School/Science Photo Library
The placenta has an important role, but it is poorly understood.
The placenta that supports a fetus for nine months is thrown away after birth, but its influence on health lasts a lifetime.
Now, the US National Institutes of Health (NIH) is launching a major effort to unlock the mysteries of this poorly understood organ. The US$41.5-million Human Placenta Project (HPP), announced on 26 February, seeks to fund the development of new technologies to help researchers to monitor the placenta in real time. These could include everything from tests to detect fetal DNA in a mother's blood to artificial placentas-on-chips.
“The human placenta is clearly critically important — I wouldn’t be here if I hadn’t had one,” says Catherine Spong, deputy director of the National Institute of Child Health and Development, which is one of two NIH institutes funding the project.

More related stories
But it is difficult to study the organ in action. Animal models are of limited use because each mammal species has a unique process for placental development. And researchers can obtain a human placenta only after a baby has been delivered, at which point the organ is no longer functional.

Techniques such as ultrasound and magnetic resonance imaging offer physicians a restricted view of the placenta in people, and the methods are generally too crude to identify problems early enough for clinicians to intervene, says Yoel Sadovsky, an obstetrician–gynaecologist at the Magee-Womens Research Institute in Pittsburgh, Pennsylvania.
If the NIH effort is successful, obstetricians and researchers will be able to monitor the placenta in real time, as a proxy for monitoring fetal health. Spong says that the project is similar in thrust to the US government’s Brain Research through Advancing Innovative Neurotechnologies initiative, in that it seeks to develop new technologies to enable scientific advances.
Each proposal for the NIH programme must include a clinical obstetrician, who can ensure that the new technologies are useful for modern clinics, and a placental-biology expert. But the best ideas could come from engineers, radiologists and other interdisciplinary experts who join the teams, says Spong. The money will be split between eight or nine projects, each of which will be funded for four years.
Up to $39 million of the effort’s large budget comes from money that had been set aside for the NIH’s National Children’s Study, a $150 million effort that was to study the health of 100,000 children over decades, but was cancelled in December.
At a meeting in Potomac, Maryland, last May, researchers hoping to participate in the HPP presented a range of ideas for monitoring systems. Many seek to develop imaging techniques, such as those using nanoparticles that could cross from the mother’s circulatory system into the placenta and deliver markers that would be visible on a scan. Other researchers hope to capitalize on recent research1 showing that a pregnant mother’s blood contains cells, bits of DNA, and other materials sloughed off from the placenta, which could provide markers for fetal health.